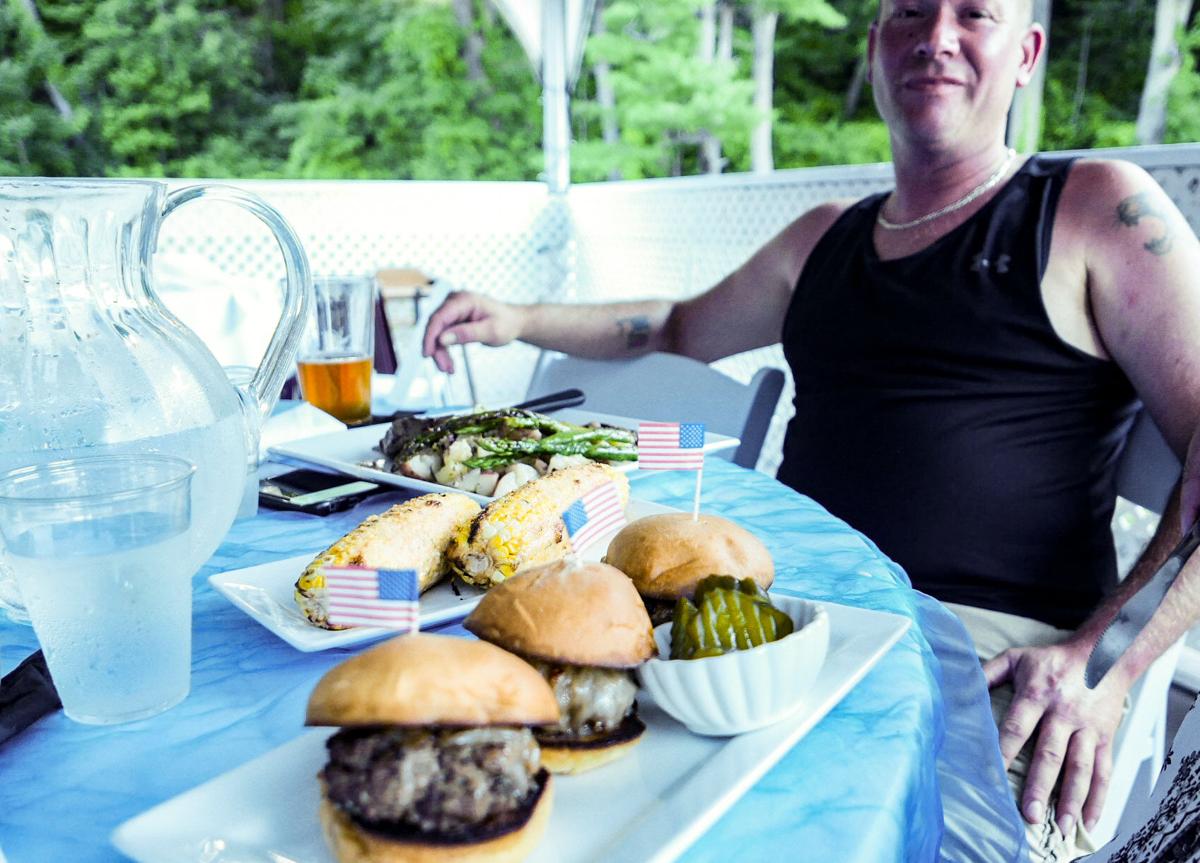 Castle Sliders, a big favorite on the summer menu. 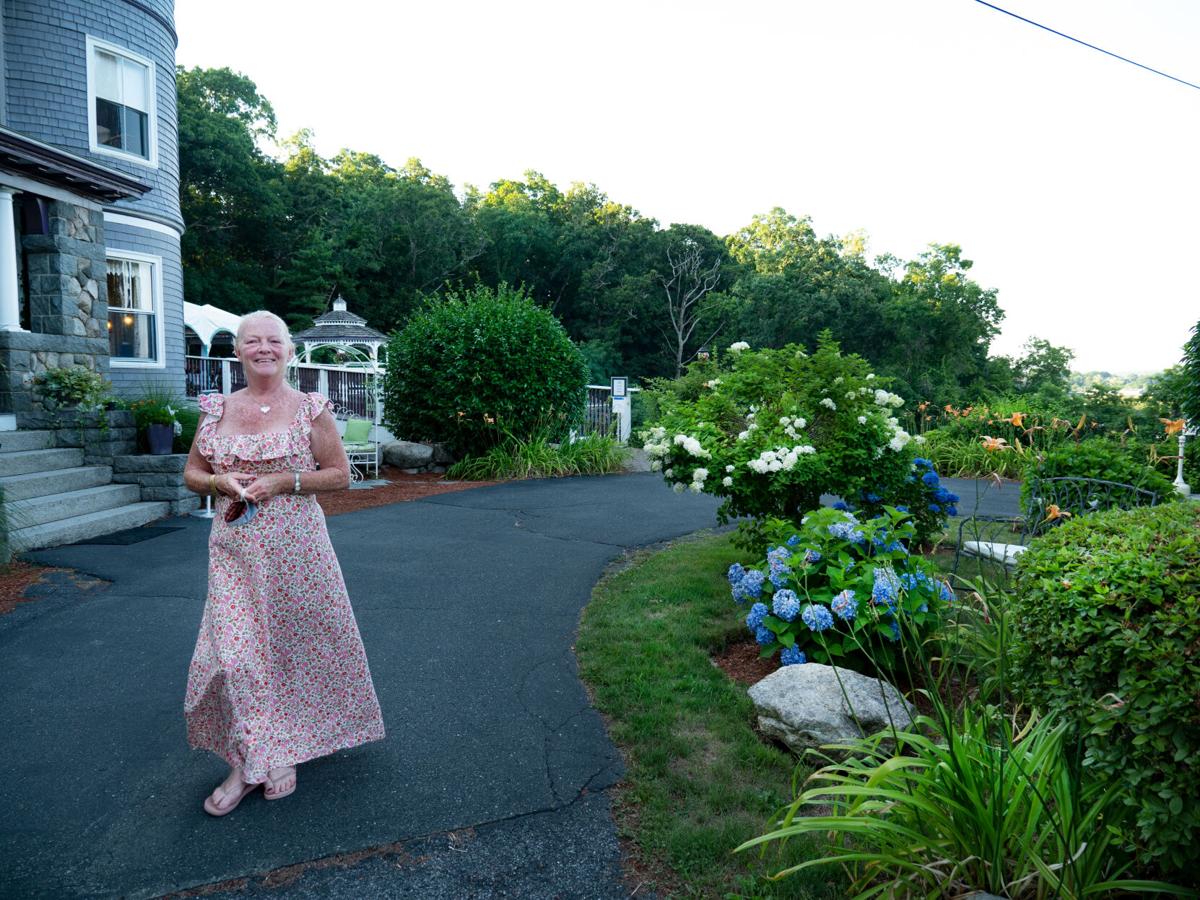 Laura Baker is owner and inn keeper of Gloucester’s Castle Manor Inn.  Her property’s big elevated outdoor deck is a big draw for weddings.  This summer, it’s big with those looking for outdoor dining on Cape Ann. 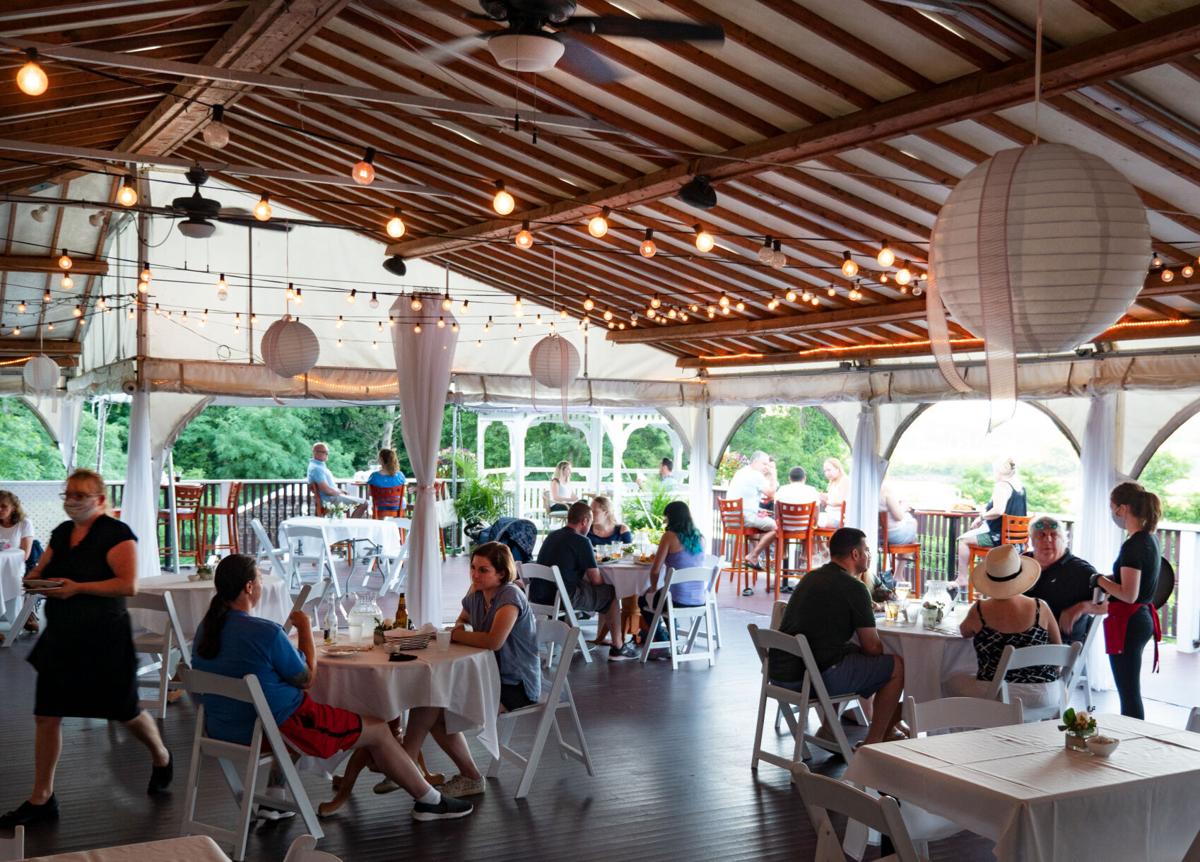 This summer has everyone appreciating the true value of outdoor dining. But for some restaurants like Sea Glass at the Castle Manor Inn, with its massive outdoor deck overlooking the back side of the Annisquam River and the Blyman Canal in Gloucester, every summer is about outdoor dining.

On a recent Friday night, socially-distanced tables were full of customers, including a couple from Concord, NH who were enjoying Lobster Pie and Castle Sliders.  They’d come for dinner, and they came to take in the beautiful river views at the historic property.

“Outdoor dining has always been a big part of what we do,” said Laura Baker, owner and innkeeper at Castle Manor.  The elevated 40-by-30-foot deck is one reason.  So is the historic charm of the property, and its old-growth trees and gardens that give the feeling of being pulled far off the main road.  But the food at Sea Glass is the real star, with a mix of “fan favorites” combined with seasonal items developed by chef Dan Lavalla (“and approved by me,” says Baker, jokingly).

And Sea Glass does indeed have its regulars who come for the restaurant’s favorites.  Filet Oscar is one, an 8-oz. filet mignon topped with crabmeat, asparagus, and whipped potato.  “Simple and done exactly right,” said one customer.  The Steak Tips with Rosemary Potatoes and Chicken Française are also perennial favorites.  (“We have dishes that we just can’t take off the menu,” said Baker, who has owned Castle Manor with her husband since 2011).

But it’s this year’s seasonal specialties that really pop, like the baked haddock and the eggplant caprese.  The “street corn” (cobb corn, charred on the grill and smothered with butter, cheese, spices and cracked pepper) or the pancetta wrapped scallops which are indulgent and utterly worth the calories.

The property opened for the season in May, in the middle of social distancing, so the team decided to add menu items that Sea Glass wouldn’t normally carry, like fried clams.  They’re doing well with the shrimp scampi and lobster dinner and the steak tips.  Pair any of these with a good wine or specialty cocktail.  For the record, Baker’s favorite cocktail is a “Painkiller,” the Caribbean mainstay made of rum, pineapple juice, orange juice, cream of coconut, and nutmeg.

It’s easy to see why the Castle Manor Inn is a high demand setting for weddings and celebrations.  For locals, though, the location on Essex Street (Rte. 133) at the north end of the Causeway is perfect for those coming from Magnolia, West Gloucester, Essex, or Manchester who are looking to avoid the Boulevard drawbridge, one of the state’s busiest.

The history of the Queen Ann Victorian style home shows everywhere.  Built at the turn of the 20th century for Ruben Brooks, co-founder of Lepage’s Glue Company, the home took two years and cost $14,200 to complete in 1900.  The mansion accommodated family and live-in staff with plenty of room and one bathroom (a luxury in that day).  There have been several owners throughout the years.  In the late 1940s and 1950s, the property was renovated to become a hotel and motel, adding 16 units in two buildings.  Back then it was called “Spruce Manor.”

The grand sheltered function deck was built in 2001 and that kicked off the property’s popularity as a site for destination weddings and other functions.  This summer, Baker said, the weddings are still happening, but they’re smaller, more selective, and in some cases, they’re a spur-of-the-moment affair (“I had someone call two weeks ago asking for a wedding the following weekend!”).

But when the weather warmed, and people around Cape Ann wanted to get out again and head to an outdoor space that felt special and tucked away, Baker said she was pleasantly surprised to see them finding Sea Glass and the Castle Manor Inn.  For dinner.  And a cocktail.  Perhaps a Painkiller.  On that big, beautiful deck.

Want other ideas for eating outside?  Check out these local spots, which offer outdoor dining.