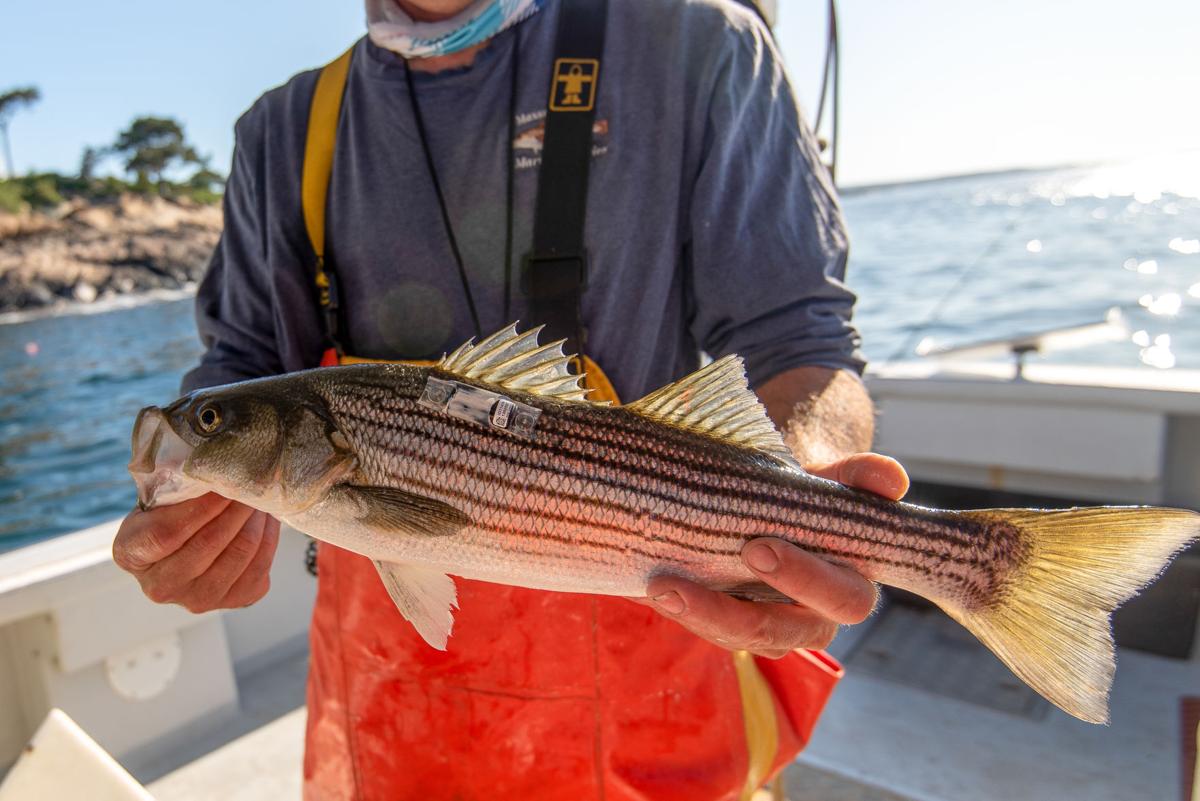 DMF researcher holds a “schoolie” with a transmitter affixed just below its dorsal fin prior to its release in Salem Sound.  (Courtesy of Joey Holbeche) 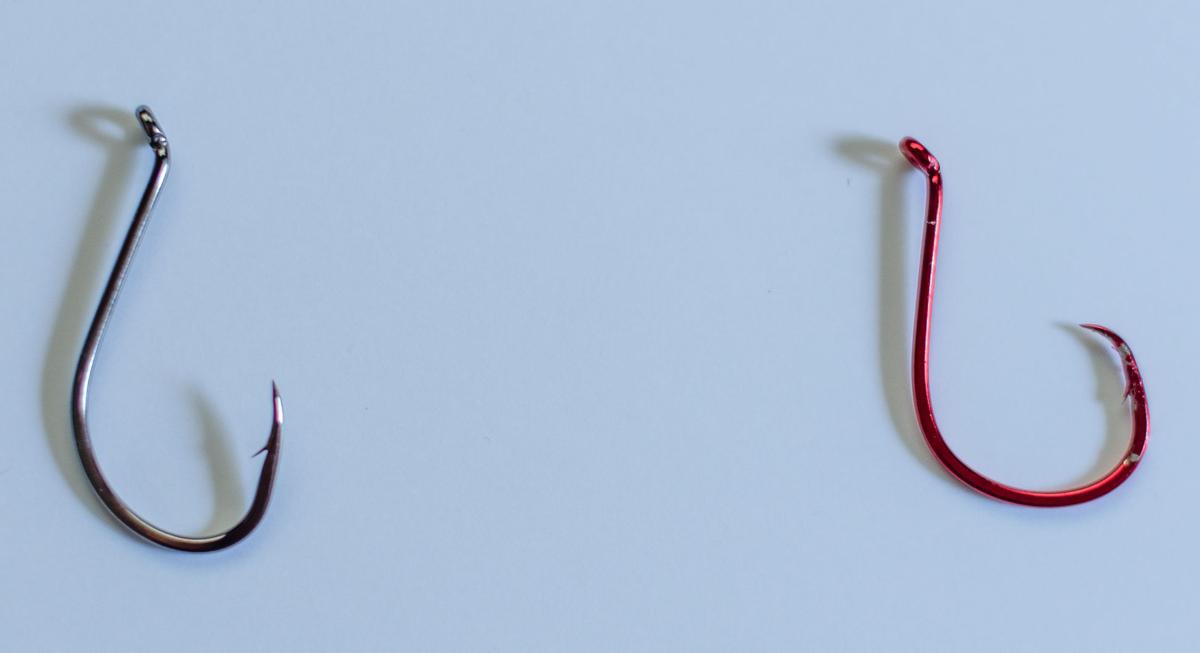 Small differences in hook design promise a big difference in release mortality.  The tipof the circle hook on the right is bent toward the shank of the hook and its hook and shank are "in line" or parallel to one another.  The J-hook's shank and hook are not parallel..  (Courtesy of Joey Holbeche) 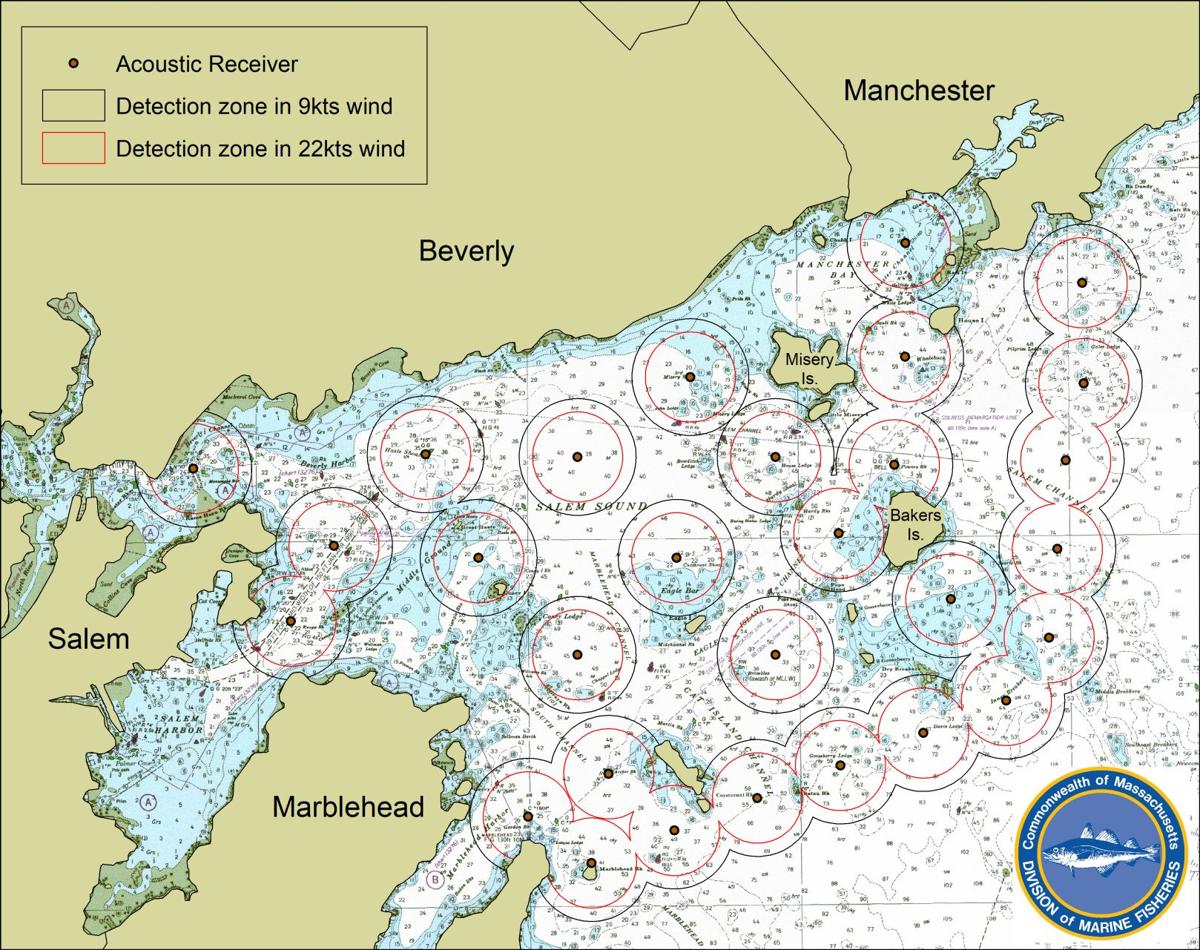 Map of Salem Sound showing the position of the 29 acoustic receivers that will track the movement of striped bass tagged with transmitters. (Courtesy of Bill Hoffman/Mass DMF)

Like a string of pearls stretching from Lobster Cove to Marblehead Rock just east of Marblehead Harbor, 11 individual acoustic receivers set the perimeter of a 29-receiver array placed throughout Salem Sound by the Massachusetts Department of Fisheries (Mass DMF) as part of a groundbreaking scientific study of striped bass.

Over the last month, local boaters and fishermen may have noticed scientists in Mass DMF boats setting in place orange lobster buoys with acoustic receivers.  Now they are turning their attention to the central purpose of the study: to better understand the mortality of the striped bass released by fishermen.  According to Bill Hoffman, senior marine biologist at the DMF and co-principal investigator of the study, Massachusetts fishermen caught approximately 5.7 million striped bass in 2019 of which about 195,000 were “keepers” (at least 28 inches long, at the time) “and the rest were released to fight another day, but did they?”

For the last 24 years, striped bass stock assessment data from the Atlantic States Marine Fisheries Commission (ASMFC), which coordinates management of fisheries within three nautical miles of shore along the East Coast, has assumed a 9% mortality rate for the millions of striped bass released by fishermen each year.  The DMF study will provide new evidence to challenge that long-standing benchmark.  To do that, the DMF team plans to catch 175 stripers (using dead and live bait) throughout the summer and affix transmitters just below the dorsal fin of each fish.  Once a fish is released, the receivers will detect its tail movement; a dead fish will immediately be detected by its lack of movement.

This year the DMF made two important changes to striper fishing regulations intended to rebuild stock levels that have been in decline in recent years.  The first was to implement a new “slot limit” requiring recreational fishermen to keep only those fish between 28 and 35 inches long.  And the second was to require bait fishermen to use “in-line circle hooks” and prohibit the use of “J-hooks.”  Circle hooks are more likely to hook the fish in the lip and avoid lodging more deeply in the esophagus or gills.  The advantage of circle hooks is well documented from studies on cod and other marine species.  Surprisingly, Hoffman told me, “very little work has been done estimating the conservation benefit of using circle hooks in the striped bass fishery.”  About half the fish in this study will be landed with circle hooks and half with J-hooks.

Although the primary focus of the DMF study is to determine the relative survival rates of fish caught with circle hooks vs. J-hooks, a variety of factors affect the ability of a fish to recover after being landed and released.  These factors include size of the fish, water temperature, level of dissolved oxygen in the water, fight time, handling time, total time out of the water, and even the skill level of the angler.  All of these factors will be carefully documented for each fish caught and tagged this summer.  Hoffman believes most fish that die from the effects of one or a combination of these factors do so within 48 hours of release.

The plan is to trace each fish’s whereabouts after release to determine its two-week survival rate.  If a fish swims outside of the receiver array, it’s likely to be picked up by one or more of the 150 DMF receivers in place along the Massachusetts coast.  And if an angler should happen to catch one of the tagged fish, there is a phone number on the tag so the angler can call in to report the location of the fish.

I asked Hoffman whether the transmitters themselves represent a survival risk factor to the fish.  He acknowledged that there is a risk, but like studies involving the tagging of other animals, including ospreys and snowy owls, researchers feel the scientific value of their studies far outweigh the risks to individual animals.

The DMF team will be working in Salem Sound through August.  The project will continue next summer when they plan to investigate the impact of other tackle types (e.g., artificial lures and treble vs. single hooks) on release mortality.  Hoffman says that “once enough hook types have been tested . . . the intent is to have a new and more robust release mortality rate estimate” that can substitute for the 9% figure used in the ASMFC’s yearly stock assessments since 1996.

Jim Behnke is a retired publisher who lives in Manchester with his wife, Connie.  You can contact him at jim.behnke@thecricket.com

Jim Behnke is a retired science publisher who lives in Manchester with his wife, Connie.  You can contact him at jim.behnke@thecricket.co.

The Striped Bass of Cape Ann

It happens every spring.  They spawn in the freshwater estuaries of Chesapeake Bay, Delaware Bay, and the Hudson River and then migrate north to Cape Ann waters and beyond.  The “schoolies” begin arriving in May followed by the bigger fish in June.  By late September the pattern reverses as they head south to over-winter in warmer waters.

We're Calling This One "The Boys of Summer"

The boys of summer!  Here we see three rows of emerging men with nothing but confidence and … Read more

This shot struck us that some elements of style really are timeless.  The sunglasses! The ta… Read more