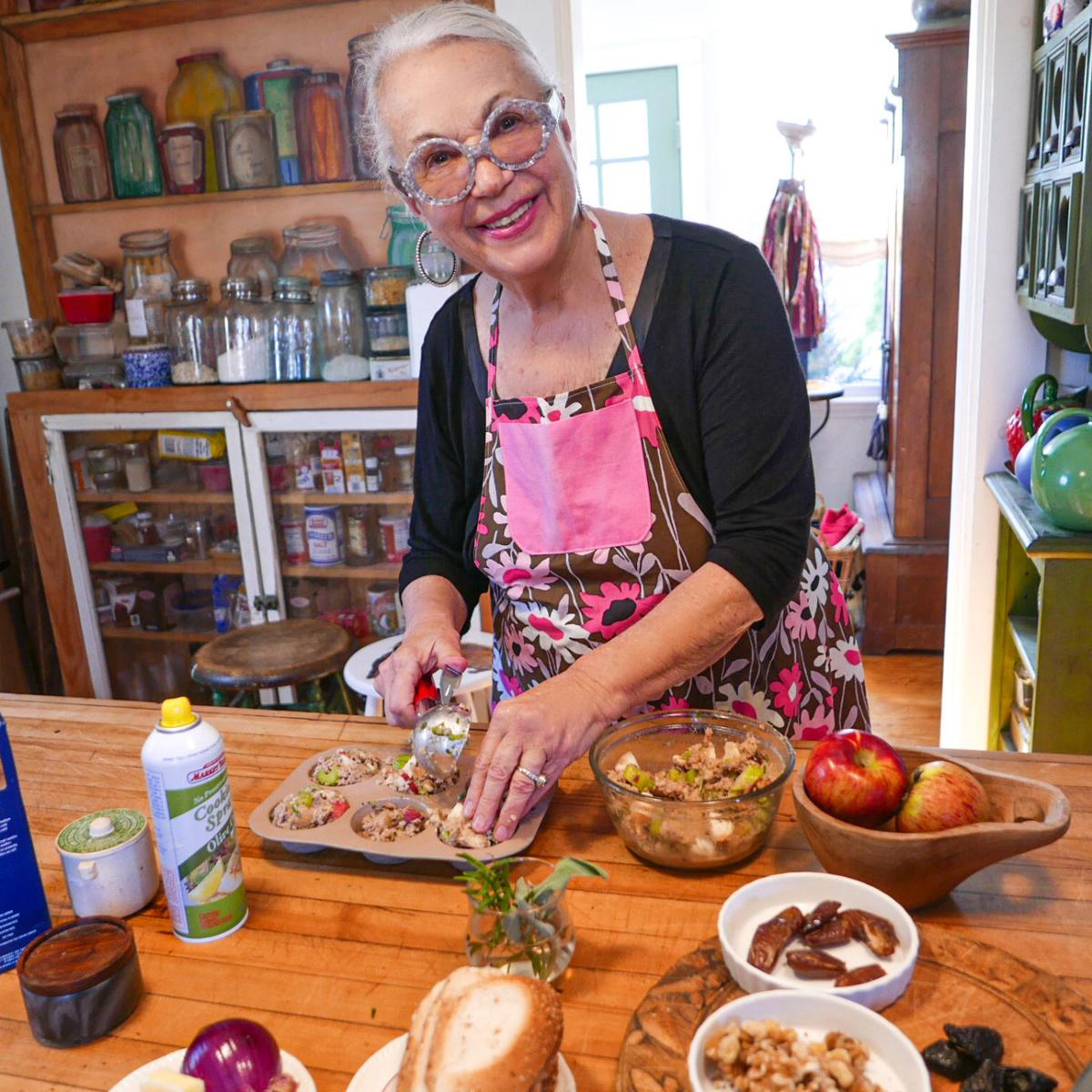 Rosalie Harrington’s restaurant in Marblehead was a cult favorite and its success gave her opportunities early in Food Network television.  Her message?  Don’t take cooking so seriously — have a laugh — especially during the  holidays. 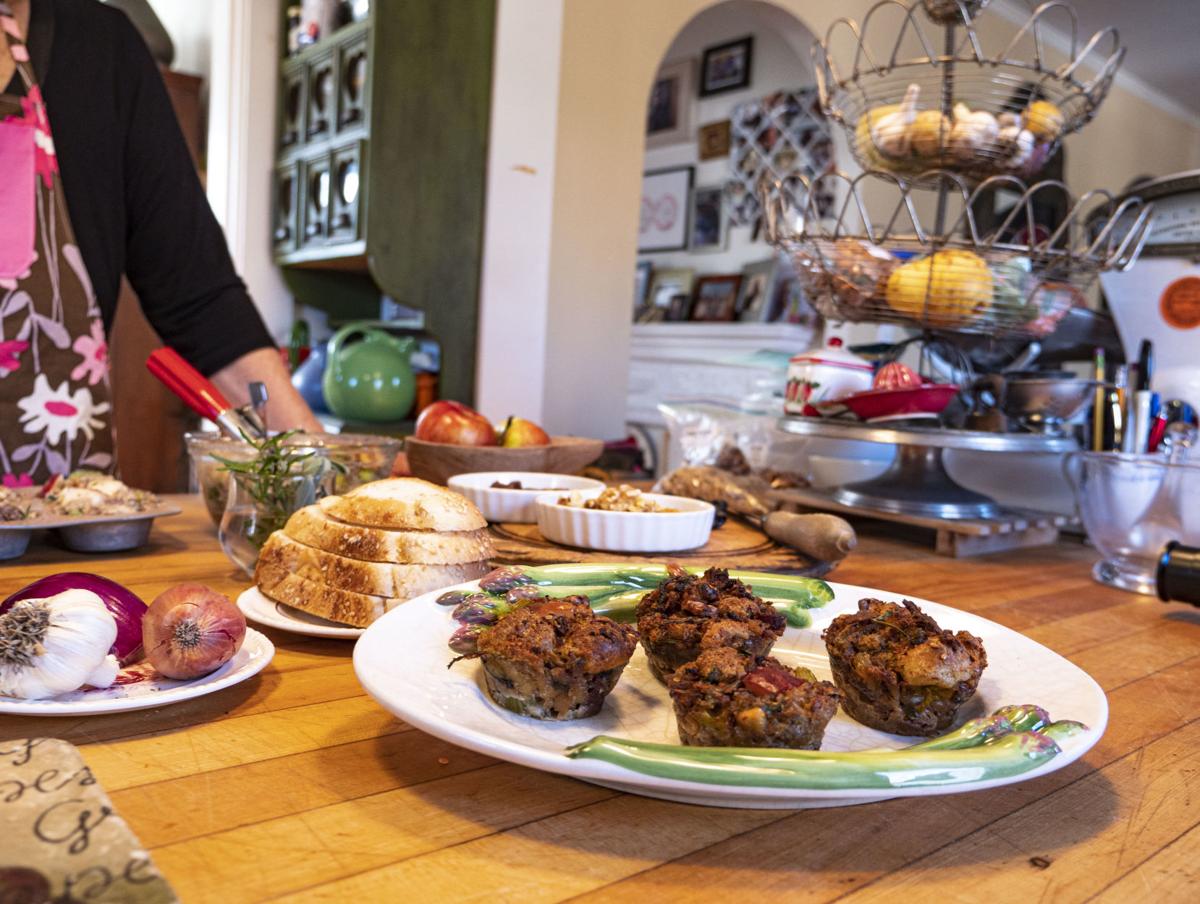 “Stuffing” (or “dressing” if it is not cooked in the bird) shouldn’t be just for Thanksgiving. Here, Rosalie makes her recipe in individual portions by using a muffin tin.

With the holiday season rushing in, I often get asked for ideas from people who would like to know how to make hosting fun, how to make a great pie crust, whether and how to do stuffing, and even how to keep family conversations from slipping into dangerous topics like politics. In general, I guide them toward avoiding being overly ambitious when there are guests coming who they want to impress.

At twenty, I was a recent bride living with my then husband in graduate student housing at the University of Chicago.  I had gained a reputation on my floor as a good cook, hosting small dinner parties on my budget —  made meager by our one-income household while George studied for a masters degree.  But lasagna or any simple inexpensive pasta dish with a cheap jug of wine was appreciated by this mostly Midwestern group, who found any toe dipped into the world of Italian to be quite exotic.  Even so, I felt there was a great deal of pressure to think about hosting Thanksgiving.  My menu included a few Italian items, such as antipasto, lasagna, turkey, stuffed artichokes, stuffed mushrooms, stuffed peppers — virtually anything stuffed with my grandmother's special stuffing. With my husband’s advice, only some of which I asked for, I learned I should “Americanize the menu.” My Italian grandmother, an immigrant living in Boston, was familiar with this sort of request. “Americans eat Wonder Bread,” she would say, discarding them with a wave of her hand.

A few days before I made my stuffing — as bland as I could — I made a sweet potato and pecan pie (to pay tribute to my Mississippi grandmommy) and an apple pie.  One of my twelve guests offered to bring ice cream. On Thanksgiving morning, I heated my oven and had the cider and Marsala wine close by to occasionally pour over the bird, as my mother reminded me to do every time we talked.  Table set, the two rooms organized, I placed the turkey in the pan, stuffed it, placed some sliced prosciutto over the top and sprinkled some crushed thyme, rosemary and sage sparingly over it. The twelve-pounder looked great, even though it was uncooked. Maybe this would work out.

When I went to put the bird in my oven, I was reminded that it was very small, while the turkey was not. I twisted that pan and juggled it around, then with all my might, I shoved the pan into the oven.  I could hear the crackle of the heat on the skin and it immediately filled our tiny apartment with smoke and the aroma of Thanksgiving.

Occasionally, I opened the door and poured some Marsala and cider — as best I could — over the bird.  Each time I pulled it out for this procedure, more skin would go missing from the bird and relocate onto the inside of the oven. While it sure did smell good, my bald bird was odd to look at. I saved the day by giving up on presenting my whole golden-skinned turkey on my beautiful platter and cutting up the turkey, sprinkling it with more herbs and some gravy just before the guests arrived. We were never able to completely de-skin the oven and for the rest of the year it smelled like Thanksgiving. Perhaps it does to this day. We did have a million laughs, however, over our first Thanksgiving.  In fact, I think I'll call my ex and see if he remembers it.

In recent years, we haven’t typically hosted Thanksgiving.  A cousin of my second husband's has about thirty family members over each year.  She is the perfect host.  She doesn't micro-manage her guests' decisions to make whatever they like, a vegetable, a dessert, wine, or cheese — she trusts that it will all work out.  And it does. My job, as the only chef in the group, is to make the gravy.  Liz has the Marsala and the cider ready for me and the aroma brings back memories.  With her assistance, we make a good gravy, intermittently pouring the cider and the wine over the turkeys during the cooking.  By the time everyone arrives, the two twenty-something pounders have been plattered and the pans are ready for me to make gravy.

My reward for helping is to leave with the carcass of one of the birds — I love to make soup from it.  My relatives have Chinese take-out containers with extra stuffing, veggies and meat for anyone to take home, which is such a nice gesture.  It feels more like Thanksgiving if I make something for the holiday. I love the aroma and then we have something to eat for a few days, like a turkey pot pie or cornish hen. And it's always nice to have a special dinner as a way to pull the grandchildren together.

Rosalie Harrington is a chef and cooking instructor who started the nationally-known Rosalie's Restaurant in Marblehead in 1973, which she operated for nearly 25 years.  She and her husband, Todd, live in Beverly Farms.

This recipe was shared with us by Gilbert, with thanks to Dean McFarland.  It’s made with Black Trumpet mushrooms, which some people found on the walk.  According to Gilbert, this is a flavorful and fairly easy dish to make.

"It always smells so great, what are you cooking,” a friend asked recently.  I assured her t…