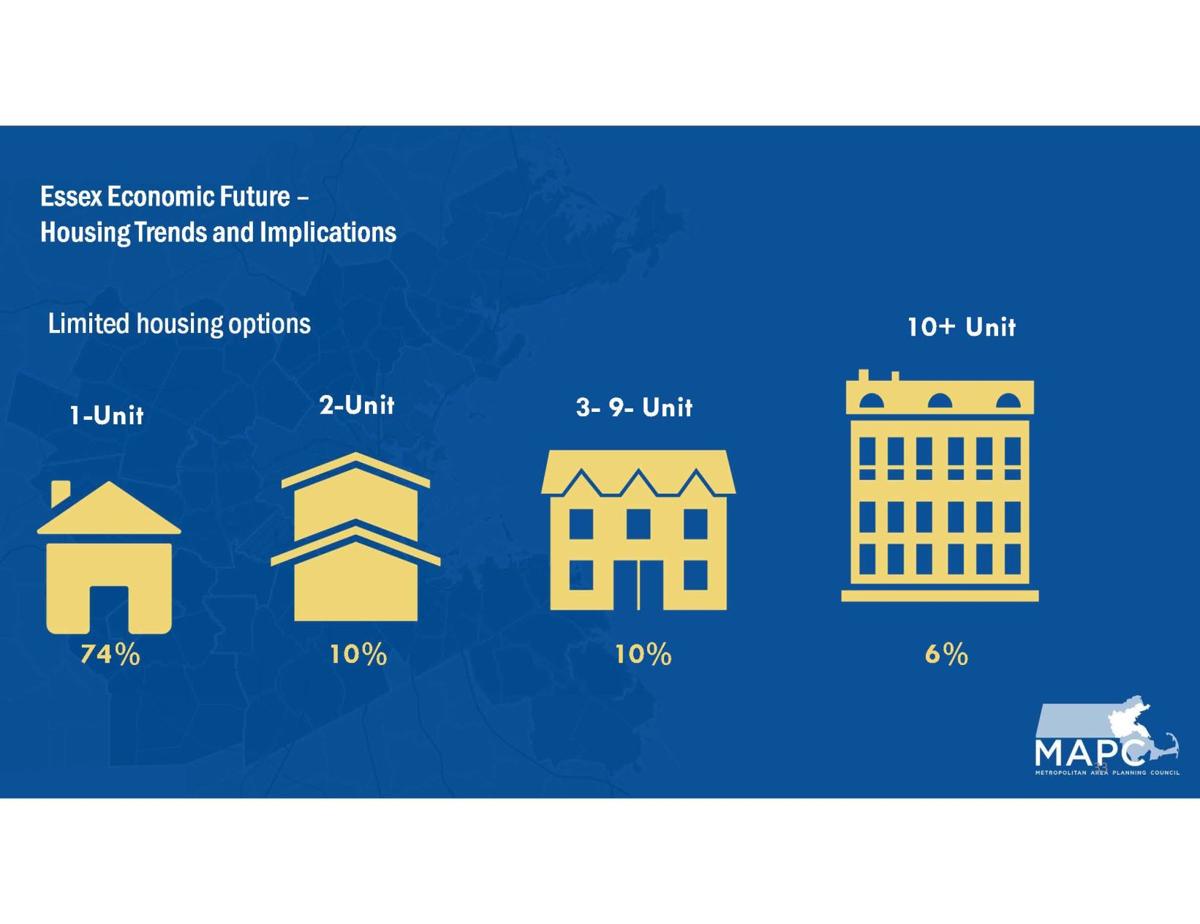 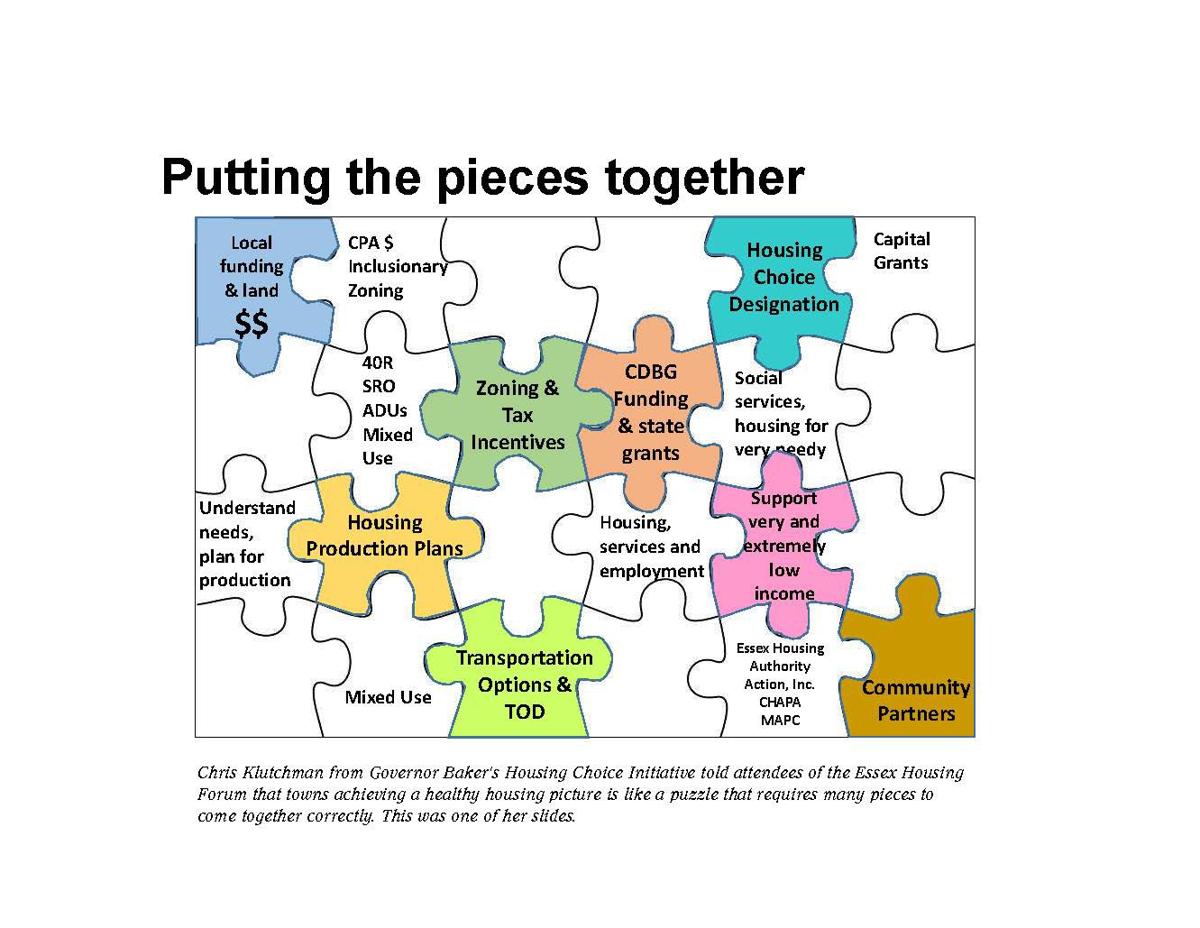 The Essex Planning Board met Wednesday to continue sharpening a new zoning bylaw proposal for the spring Town Meeting that would create a downtown mixed-use zoning district that it believes is a key to both economic growth and addressing much-needed housing flexibility for those starting out and older residents seeking to scale down from larger, single family homes.

There are many details to work out—such as setback, frontage and parking requirements—but the broad idea of formalizing a mixed commercial and residential zone in downtown Essex that would attract businesses, employers and small developers is supported by the Board of Selectmen, the Economic Development Committee and the Essex Housing Coalition, as well as the Planning Board.  The board will finalize these details in the next four to six weeks and hold a public hearing before moving to present the “Downtown Mixed-Use Zoning District” bylaw at Town Meeting in May.  Passage of the new zoning requires a two-thirds majority vote by residents.

In proceeding with the proposed bylaw, Essex is hitting on a big part of what state officials have identified as a key success factor in addressing the looming housing challenge facing all towns in Massachusetts as its population ages dramatically.

Essex faces its own unique challenge.  It’s aging along with the rest of the state (but not as rapidly) while it’s also growing quickly (18 percent since 2000, with an additional three percent projected growth by 2023,) pulled in by a good school system, good home values relative to more expensive cities and towns.  All this while more than 75 percent of the town’s housing is single-family homes (that are becoming more expensive), declining number of rental units and very little approved new building permits in the last ten years.  All this makes for a challenging picture, according to two recent public forums on housing and economic development, hosted at Town Hall.

But back to the zoning.  Two weeks ago, residents heard from state experts on the “big picture” issues that drive housing health in communities like Essex.  Chris Klutchman director of the Housing Choice Initiative, the multi-pronged program created by Governor Charlie Baker to align resources (grants and technical help) and pooled data for communities seeking assistance in increasing their supply housing.

In the end, Klutchman said, an inadequate housing supply like that in Essex drives up the cost of housing, which makes the community a less attractive place to live and work than other regions or states with a lower cost of living.  That’s particularly true for younger workers who are deciding where to advance their careers and start families.

“You want to be

number one in a lot of things,” said Klutchman.  “But you do not want to be number one in housing unaffordability.”

She said there is a “recipe” for towns that are successful in retaining a vibrant community with housing that meets different incomes and life stages.  They combine local funding and land, zoning and tax incentives, state grants, support of very and extremely low income, transportation options, housing production plans, community partners and, of course, participation in the state’s Housing Choice Initiative.

Essex is not yet a participant in the Housing Choice Initiative, but Manchester got in early as a “small town” participant.  Earlier this month, Governor Baker’s office announced it awarded grants to ten small towns under the program, including $100,000 to Manchester to analyze options to decommission the existing wastewater treatment plant located behind Town Hall, which would enable Manchester to redevelop the site for transit-oriented projects that includes housing.

Essex may not become a participant in the program, but it is already addressing key elements of Klutchman’s success factors for communities.  Two elements are really important to success, according to  Klutchman—mixed-use commercial zoning like the one the Essex Planning Board is currently pursuing and allowing accessory units or “in-law” apartments, which Essex already allows (with the proper frontage and setbacks) for nearly all single-family dwellings, according to Planning Board Chairman Wesley “Wes” Burnham.  Other elements that successful towns leverage include doing a market analysis (which Essex is currently doing through a state grant);  addressing affordable housing for residents who qualify for it; determining best use of CPA (Community Preservation Act) funds; exploring partnerships with neighboring towns; and exploring ways to reduce costs for homeowners (by using energy cost savings via MassSave, for example.)

The Essex Planning Board’s next meeting is Monday, February 19th at 7:30.

All slides from the January 2020 public forum on Essex housing stock challenges, opportunities and overview from Governor Charlie Baker's Hous…

Essex Forum: Housing That Is Affordable Is Key To Economic Growth

Does Essex have the housing stock required to accommodate changing needs?

The answer, according to experts at a public forum on housing last Wednesday, titled “Making Essex a Place to Call Home: Housing Needs and Choices in Essex,” is no: not by a long shot.