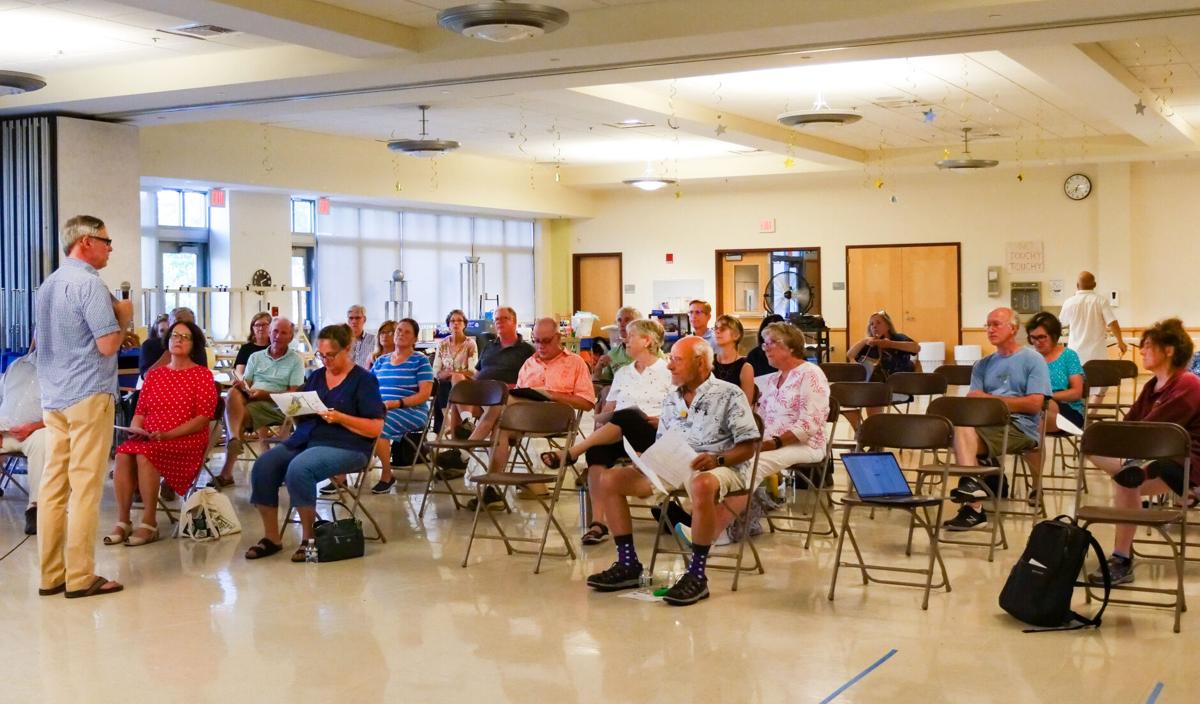 Attendees of Tuesday’s workshop at the ME Regional High School cafeteria.  The hybrid meeting offered Zoom as an option on the sweltering evening.  Only four attended by computer. 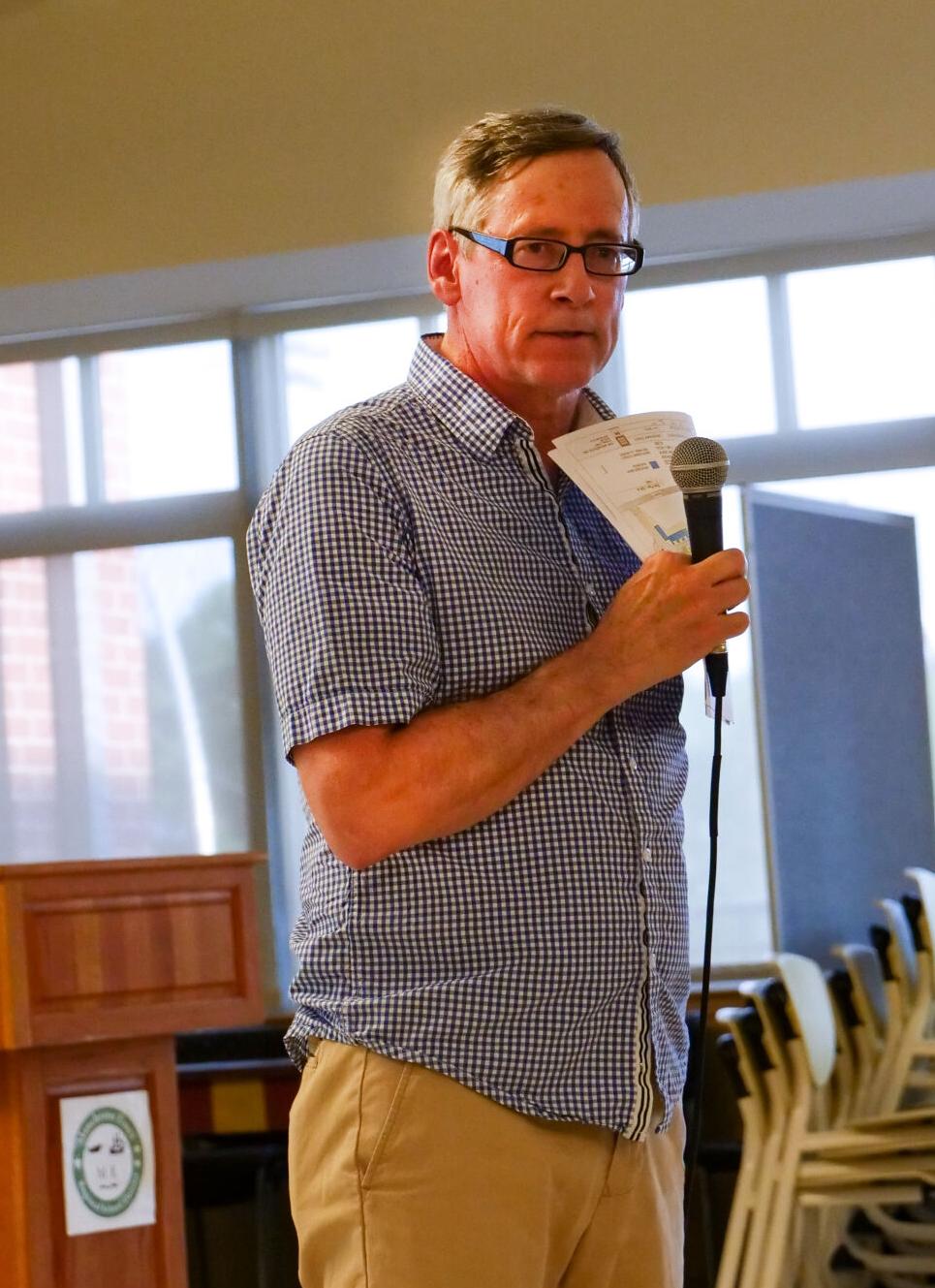 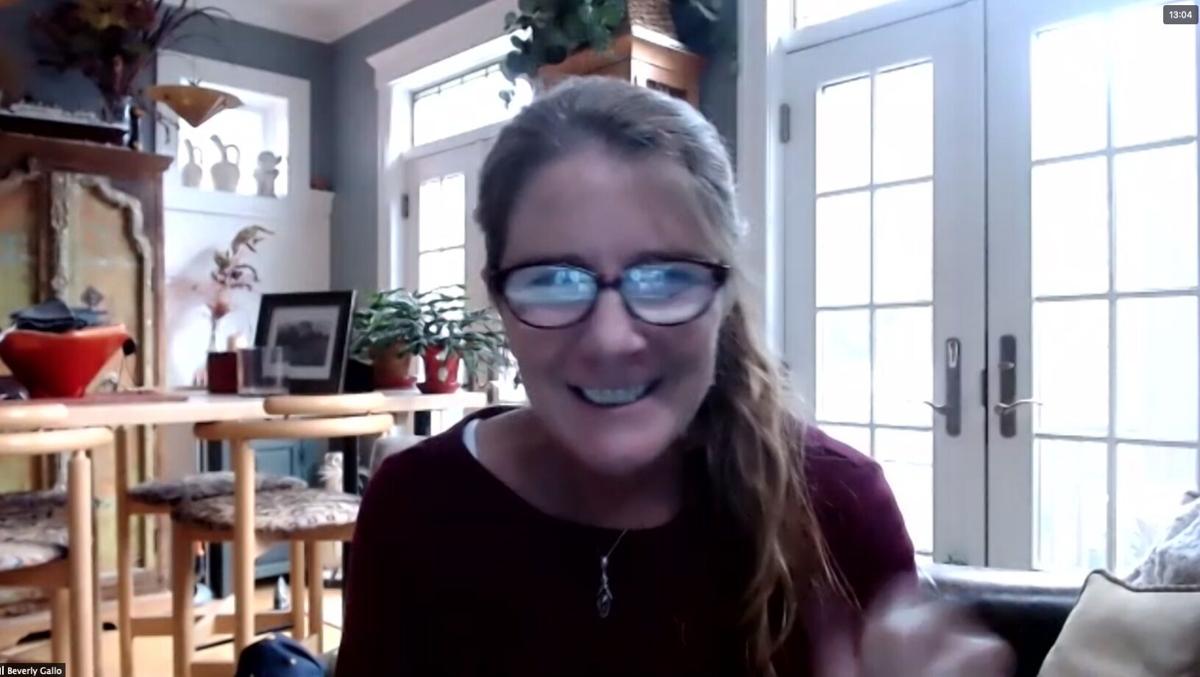 Beverly Gallo, a consultant with the Peregrine Urban Initiative who architected the “proof of concept” report designed to secure the interest of a private developer to 84 existing units on the three sites, and add 90 more across all four sites. 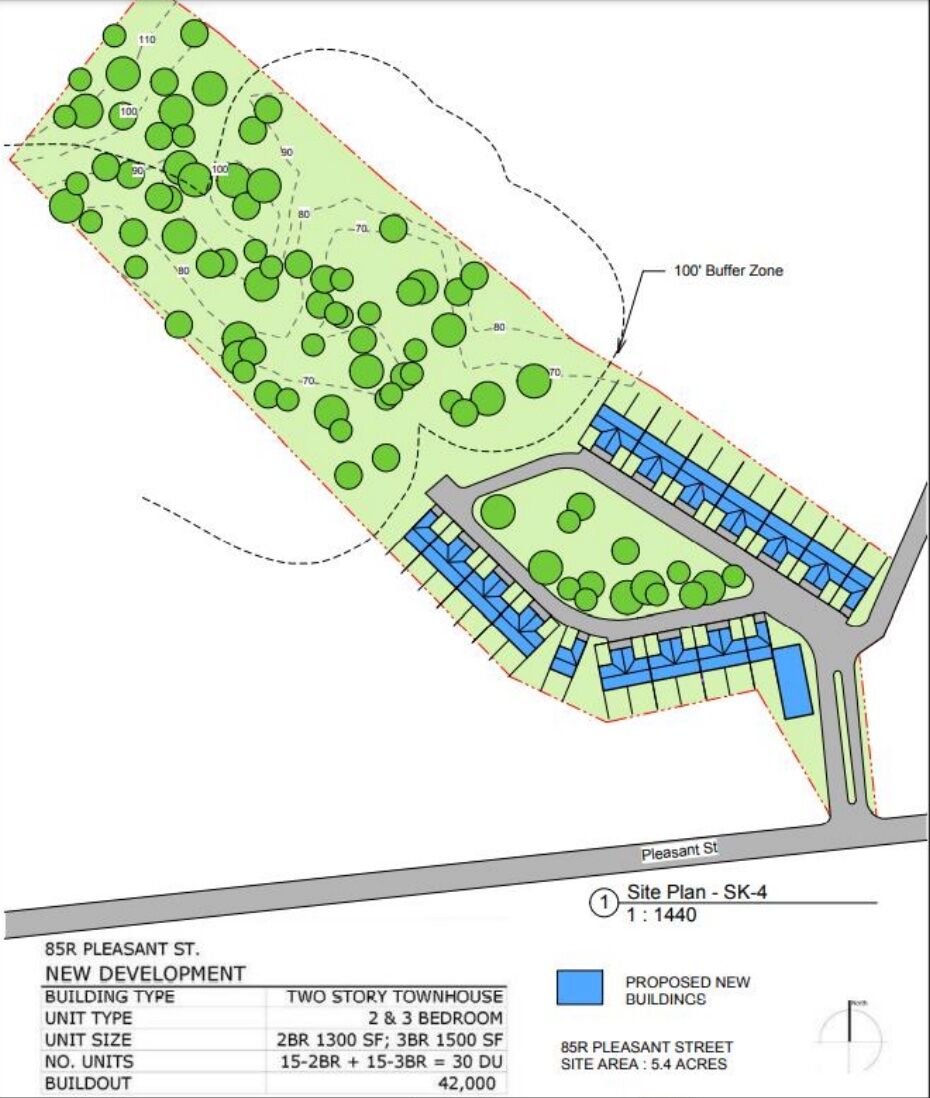 The tentative plan calls for 30 new market rate units to be built on the current DPW site at 85R Pleasant Street.

It was a hot, uncomfortable public workshop at the Manchester Essex Regional High School cafeteria Tuesday for residents to review technical, comprehensive details on a plan to rehabilitate and develop 174 units on four sites in Manchester.

But the audience, many fanning themselves, had staying power.  Nearly two hours later, the Manchester Affordable Housing Trust (MAHT) and the Manchester Housing Authority (MHA) successfully shared their sweeping, year-in-the-making plan to renovate and expand housing on the existing MHA housing sites at Newport Park, The Plains, and Loading Place Road build new units at the Pleasant Street DPW and make much-needed renovations to affordable units at

“This process is going to take a long time,” said MAHT Chairman John Feuerbach.  “We know that.”

It is the first in a series of planned forums to secure input and support for the effort to address 84 tired and aged affordable housing units, while building 90 more to make the entire effort profitable to a developer, and financially sustainable for the town.  In April, the MHA and MAHT met with current tenants to share their plans, and listen to their concerns.

Feuerbach led most of the discussion, along with Beverly Gallo, a consultant with the Peregrine Urban Initiative who architected the “proof of concept” report designed to secure the interest of a private developer to 84 existing units on the three sites, and add 90 more across all four sites.

The need to address Manchester’s housing mix has become a central focus.  The town’s housing production plan calls for a marked increase in the number of rental units, both affordable and market rate, to meet changing demographics in town.  Manchester is getting older, and smaller homes and rental units—especially subsidized ones that accommodate fixed incomes of the elderly—are needed.  Affordability is also an issue, for older residents and to encourage young residents to make a life in Manchester.  Families are also dropping, especially as Manchester ages.  In fact, there are 600 fewer students enrolled in the ME Regional School District than there were in 2011.

Central to the plan unveiled Tuesday, however, was simple maintenance.  MHA Chairman Gretchen Wood said rehabilitation of the existing units, particularly at Newport Park and The Plains, is what drove this project.  The two properties were part of a wave of Massachusetts affordable housing development in the 1960s and 70s, and now that they need updating and renovations the state has no money to offer towns like Manchester.  It’s a problem statewide, she said, and the challenge has driven creative financing and developer incentive programs to try to address it.

“This issue is not unknown,” said Wood.  “And the state has built in incentives and programs to make it work.”

Feuerbach said the state program that shaped the approach to all four properties mandates a “one for one” standard.  In other words, for every unit being rehabbed, there must be at least a matching new unit developed to make it worth a developer’s efforts.

Unlike the other three sites, the plan for the current DPW site at 85R Pleasant Street is to build 30 two- and three-bedroom units, all of them market rate units.

The profit from Pleasant Street would be enough to entice a developer to the project, and the ongoing revenue would subsidize the other three projects while ensuring they would be maintained properly.

Feuerbach said all four properties are interconnected.  Last month, he previewed the overall plan with the BOS, seeking the board’s blessing on the concept so the MHA and MAHT could begin packaging a proper RFP for developers by end of year.

But the DPW site on Pleasant Street proved a sticking point for the BOS.  And it’s a lynchpin for the MAHT/MHA plan.

First, the BOS said the DPW’s planned move from Pleasant Street to the upper School Street site on town-owned land currently used as a compost processing site by Black Earth Compost has been delayed.  Black Earth uses the property for its business in exchange for reduced rate, town-wide compost services such as curbside pick-up for all residents.  Black Earth needed a state grant for the move, which it didn’t get, and this has delayed its move to from the fall to early 2022.  This, in turn, has delayed certainty of the DPW move out of Pleasant Street.

But, once this is accomplished, there is a procedural hurtle.  The sale of any town property—even a gestural sale of $100,000 for a 5.4-acre site in the village to support affordable housing—requires Town Meeting approval by voters.

As it stands now, Gallo said, the study has accommodated all environmental and regulatory guardrails across the sites, and vetted public-private approaches for financing construction and assuring long-term viability of the properties.  This includes new state grants and tax credits that require a unit-for-unit development match to secure funding, Feuerbach said, and it will be the basis for an RFP that will be released to developers to work in partnership with MAHT and the Manchester Housing Authority on the projects.

But does that mean the plan must have the Pleasant Street property in order to work?  Not necessarily, said Gallo.  She said it was up to community interest, and community need.  If another site offers the same value and the ability to build at least 30 new market rate units, the overall goal can be accomplished.

The MAHT will schedule another public forum and continue the outreach.

At its meeting Monday, the Planning Board heard from a community housing study group seeking to widen options for Manchester’s older residents, young professionals, single individuals and local employees with a new housing bylaw amendment that would allow accessory dwelling units (ADUs) throughout town.