$36.00 for 365 days
Get Started
You have permission to edit this article.
Edit
Home
SUBSCRIPTIONS
News
Obituaries
Out and About
Homes
Expert Help
Opinion
Calendar
Classifieds
Share This
1 of 5 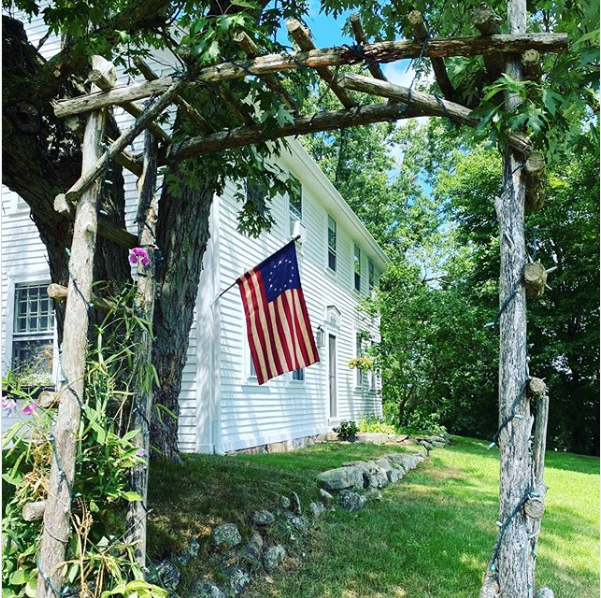 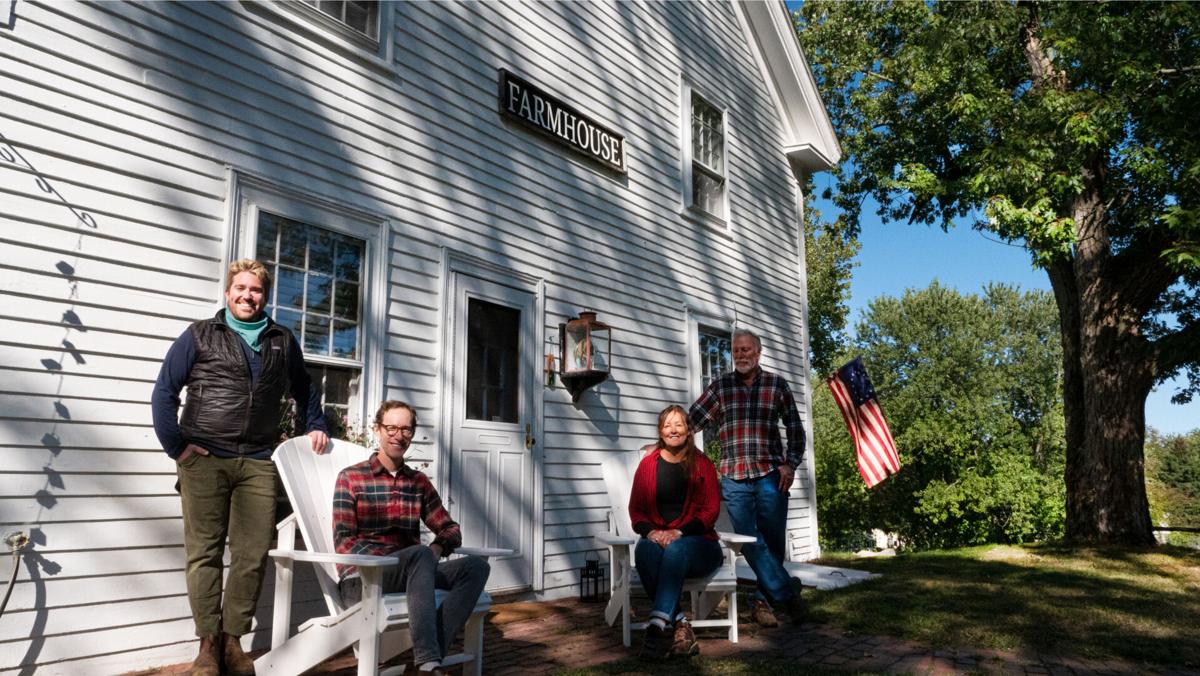 Cedar Hill Farm was in the Ginn family since 1958, and deciding to sell was a hard decision.  Luckily, they met just the right buyers.  From left, Justin O’Keefe Kane, Drew Godfrey, Jayne Ginn and Michael Ginn. 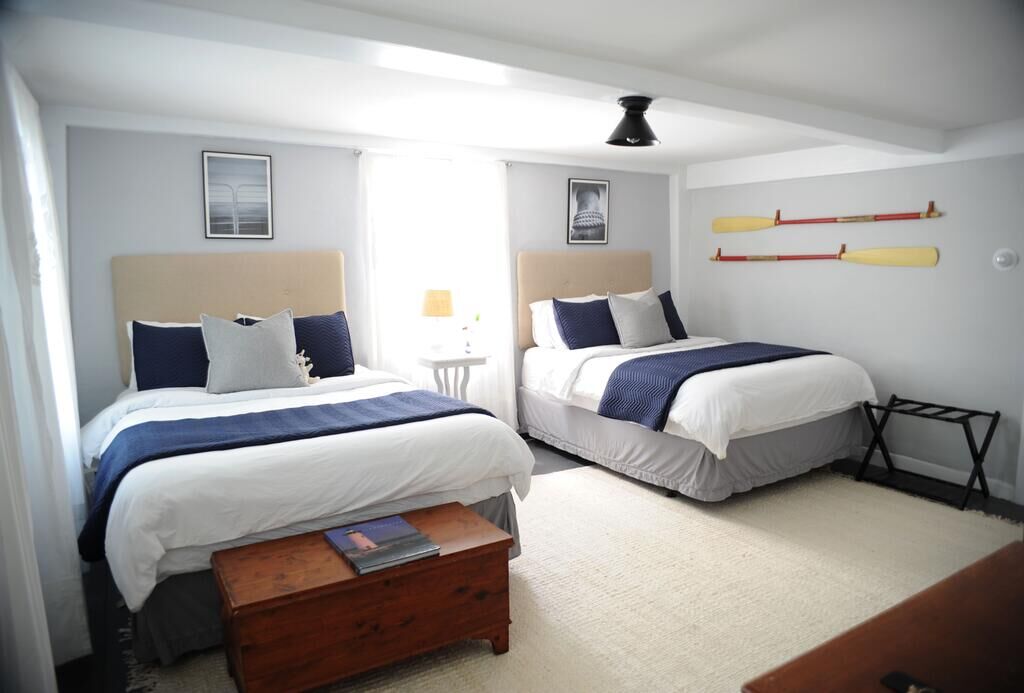 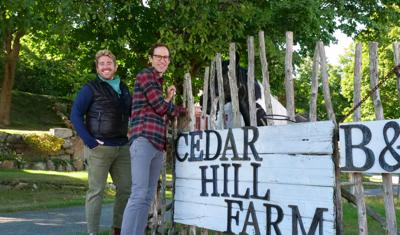 ON A RECENT SATURDAY MORNING, as horses grazed on the sun-drenched fields surrounding them, Drew Godfrey and Justin O’Keefe Kane were sharing the saga of how they wound up here.  Here—to this 325-year-old house in Essex.  The rocky path to purchasing it took place during the strict pandemic lock down last spring; yet they were determined to own this property.  What they didn't know would happen—nor did the sellers, Michael and Jayne Ginn—was that along with the sale of a house, something else was transpiring: an out of the ordinary kind of love story.

Reflecting on the myriad challenges they faced is still vivid for the pair.  It all began last November (2019) when they saw the ad for the house.  The words “rustic comfort meets modern style in a one-of-a-kind farmhouse,” leapt off the screen.  They were soon driving up to Essex. As they approached the white house up on a slight hill, known as Cedar Hill Farm Bed & Breakfast, Drew and Justin held their breath.  It’s fair to say it was love at first sight.

Drew remembers, “When we arrived, I was at home. I immediately fell in love with the history.”

And what history it is!  Eighteen acres of land with multiple original barns, a 2,300-square-foot house, a two-acre horse paddock that was once the Essex town common that was also used during the Revolutionary War by the militia as a training field.  Even a plaque issued by the Massachusetts Bay Colony Tercentenary Commissioner authenticating the house’s date as 1695, stands in front, stating this was the first free school in Massachusetts.  An easement on the property contains what is known as the “town pound,” a square section of land enclosed by four stone walls that was once used to contain stray animals.  Overgrown now, but gorgeous nonetheless, its charm is a reminder of how life was when Michael was growing up here.  “I remember being a kid and seeing a police car pull up to the town pound, thinking one of my siblings was in trouble, only to see the officer place a sow into it.”

Michael’s family bought the farm in 1958, when he was four years old.  He and his wife Jayne, and their children, have spent most of their marriage here.  When they placed the ad to sell the property it was not without a great deal of emotion and careful examination of how to let go — yet hold on too.

An ingenious solution, created by Michael and Jayne, was the creation of a subdivision, whereby they kept 16 acres, a small house, (known as “the tiny house”) for their daughter; it was believed to have once been the pastor’s house.  And another former cow barn where Michael and Jayne live in a loft apartment.

The new buyers would have two acres, four barns and the white house.  Most important, though, they would need to be willing to live in close proximity to the Ginn family.  An unusual scenario that might require a secret sauce to work.

By early 2020, Drew was obsessed.  By last February, he wrote Michael and Jayne a letter.  “This is going to be my next house.”  It worked.  An offer was made, and a price agreed upon.  However, when the pandemic peaked, the deal became complicated.  “Our bank was like, ‘should you be doing this?’,” Drew recalls rolling his eyes.  “Our attorney even advised us to back out.”  Multiple closing dates came and went.  The duo were undeterred.  The couple final-ly took occupancy Memorial Day weekend.

“This is my new home, this is what I want, and Justin is the best person to do this with.”  Justin felt strongly too, saying, “Big people take big chances.”

Six months in, they continue to feel enthralled.  It was always a dream, (for Drew) to have a little B&B and the Ginns are also thrilled what they started would be carried forward. The synergy between the two couples living on this farm has evolved in multiple ways.  Now they all feel it was meant to be.  “When we met each other the first time, we all felt the same way,” recalls Justin. “Michael and Jayne have since told us that upon meeting us they wanted us to have this house.”

Initially Drew and Justin felt a bit of trepidation about making any changes.  They wanted to make the house theirs.  “We wanted to paint the front door a different color, we were worried if that would be offensive to Mike,” said Justin.  (It wasn’t.)

As the couple get to know their new house history keeps revealing itself.  They found a small bible from the 1800’s and a little butter dish from the 1700’s.  Old school desks were discovered in the attic when they opened a trap door next to the chimney.  There are seven fireplaces all with original wood paneling and the floors are all original.  Living with beams that were erected around the Civil War sheds a new perspective on daily life here. “I wanted an old house. I wanted historic. It’s my dream house, it feels too good to be true at times,” says Justin.

The relationship that has been forged with the Ginns has created a new family for all of them, including Prince, their chocolate Labrador who is a shared dog.  The Ginn’s daughter, Allie, calls the guys her brothers.  The couples see each other daily.  Sharing meals together, wandering back and forth; boundaries have been cast aside.  On Drew’s birthday Mike went out and dug fresh Essex clams for dinner.

The Ginns are also excited by what they see Drew and Justin creating anew when they open the B&B to Plein Air art workshops including gourmet lunches, on a weekend, or the yoga workshops that have taken place.  Events like weddings are part of the plan.  It’s important to Drew and Justin to be creating memorable experiences for the community.

Perhaps that’s what paying attention to history shows us: A better way to communicate and connect with people.  And more people means more stories.  Reflecting on her life here, Jayne said, “In a house and property that

has stood for 325 years there are a lot of stories to tell here.”

“When we arrived, I was at home. I immediately fell in love with the history,” said Drew.

Hornets came away with the win against the Tigers 126 to 79. Read more