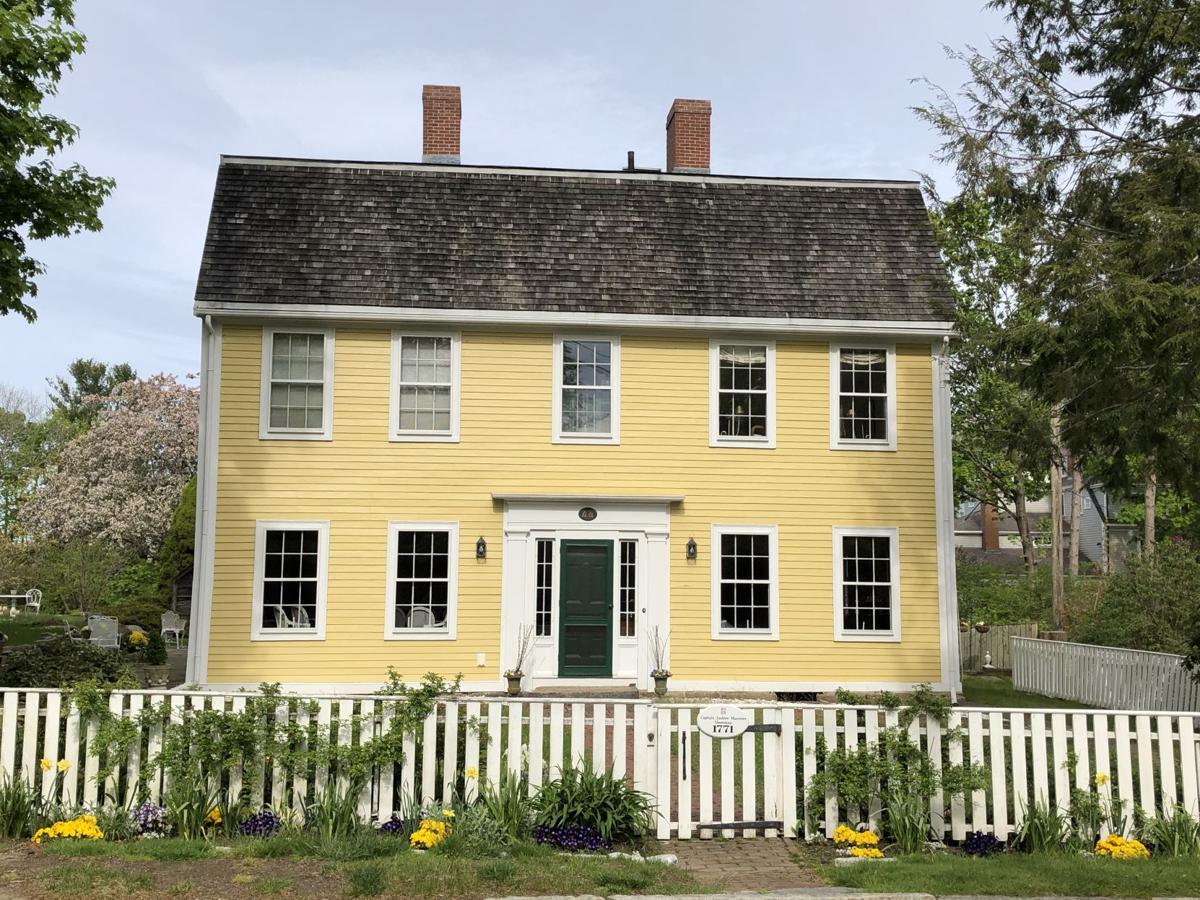 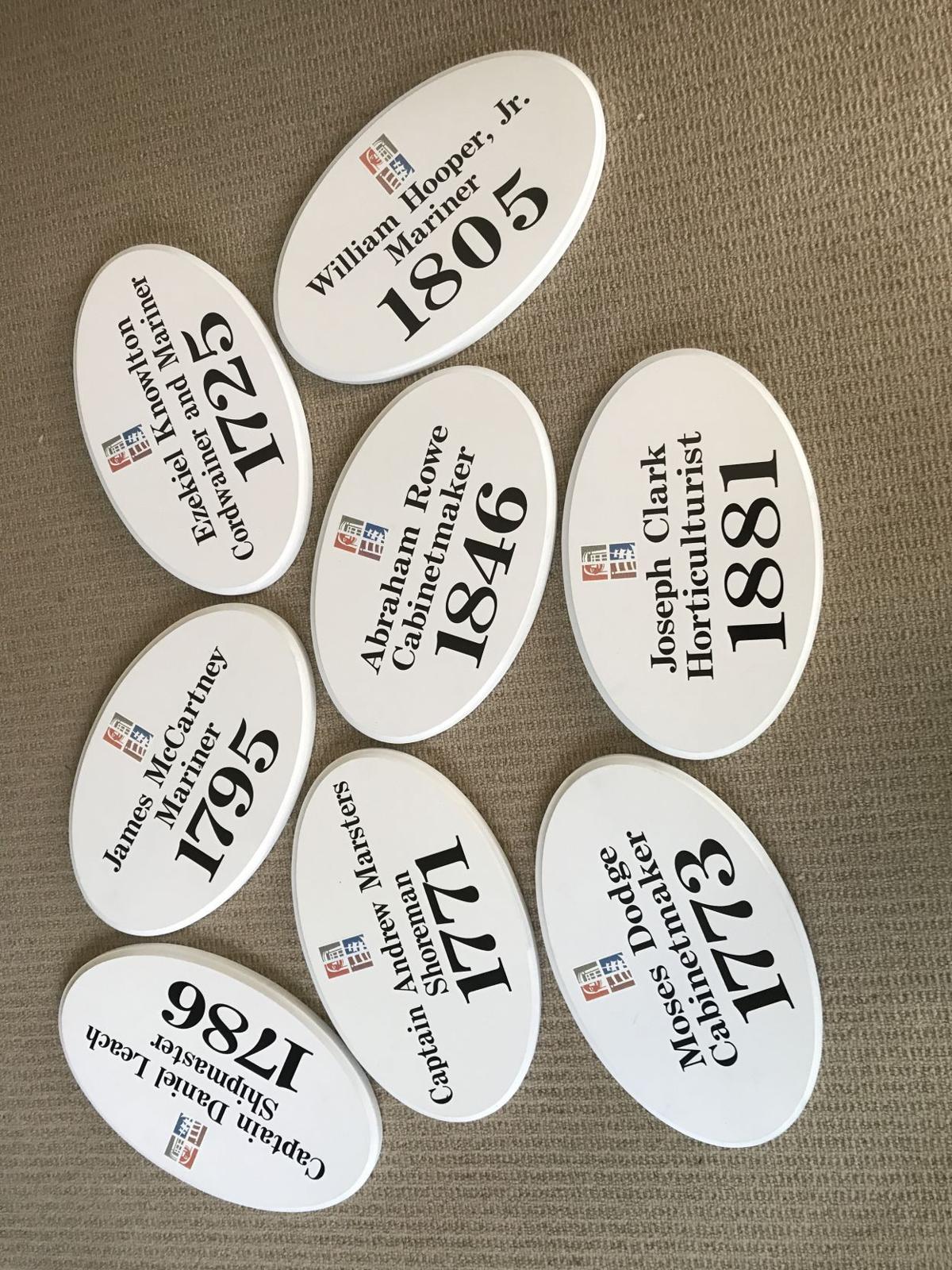 The pretty yellow house just before the bridge on Harbor Street was built in 1771. In 1725 the land belonged to shoreman Nathaniel Marsters. His family is traced back in town to the early 1650s. Nathaniel granted the town a path past his house to what we know as Tuck’s Point. When Nathaniel died in 1738 his will and deed referred to a much smaller house, a barn, and farm animals, clapboards, shingles, and nails. Nathaniel was considered a “gentleman” and left a small fortune to his wife, Hannah. She repaired the house and barn but continued to live with her 9 children in that small house.

Hannah’s 1760 will called for the property to be divided among her children. When she died in 1771, however, the house and “133 poles of land” were not divided among the siblings but were awarded to the oldest son, Andrew. He paid his siblings their share, 178.59 shillings each. He became a wealthy mariner and trader and built what was known at the time as the “mansion” house. By 1774 Andrew was a selectman and became a captain of the Manchester militia.

Marsters was a member of the Committee of Correspondence and raised money for the town militia. In April 1775 he led the Manchester militia on a march toward Lexington. When he died in 1780, his daughter, Anna, and her husband, Benjamin Epes, lived in the house until 1785 when they sold it to William Tuck, Esquire, mariner, and famed Revolutionary War privateer. Not only was Tuck active in town politics and a staunch Federalist but he was also appointed a federal customs officer by President Washington.

Squire Tuck died in 1826 and left the property to his wife, Molly, but the estate had debts and was auctioned in 1828 and purchased by other family members. Asa Osborne, married to William Tuck’s daughter, Lydia, lived in the house more than 20 years. The Osborne’s daughter, Lydia, lived in Boston by 1900 and rented the house to George Whipple who then bought the house in 1923. The house had been owned by a Tuck since 1785. Upon the death of Mr. Whipple, the property went to the Society for the Preservation of New England Antiquities. It is now under a preservation easement with Historic New England. The current owner, Marianthe Mewkill, is the conscientious steward of this special property.

Christine Virden is the archivist at the Manchester Historical Museum and a descendent of the Marsters family.  You can read the complete house history by Robert Booth at MHM.  The MHM House History and Marker program encourages everyone to appreciate the diversity of stories our architecture tells us about our shared history. Participants receive an extensive history of their house and occupants, a certificate and a handsome house marker. For more information, go to www.manchesterhistoricalmuseum.org

The Making of Manchester and America: The Hooper-Tappan House

This is the first of a series about historic homes and families of Manchester-by-the-Sea who helped to shape our community and nation. The Federal-style house at 39 Central Street has an interesting history, starting with its construction in 1805 as a home for Capt. William Hooper Jr., 34, and his family.

Stacey Clarimundo is an interior designer who in 2018 opened her studio-slash-store in Essex.  We met her when asking local home design experts how they view the seasonal design reset and share some advice from them on what’s practical, what can have great impact and make a familiar environment a little more exciting.

Well into the new season, it’s now less “out and about,” and more “in and around.”  Life at home. Entertaining.  The holidays. Winter. Coziness. All that.

This marks our first foray “Home”, with two special sections before Thanksgiving with a local take on home life and food. We focused the section on the things that make our lives inside a little nicer, a little more enjoyable.

Nor’east Frameworks in Manchester is showing a series of paintings by Charlie Hunter, one of the artists who participated in the fourth annual Cape Ann Plein Air painting competition this past October.  Using water-mixable oils and a tonalist technique, Hunter’s work is simultaneously journa…