$36.00 for 365 days
Get Started
You are the owner of this article.
Edit Article Add New Article
You have permission to edit this article.
Edit
Home
SUBSCRIPTIONS
News
Obituaries
Out and About
Homes
Expert Help
Opinion
Calendar
Classifieds
Share This
1 of 9 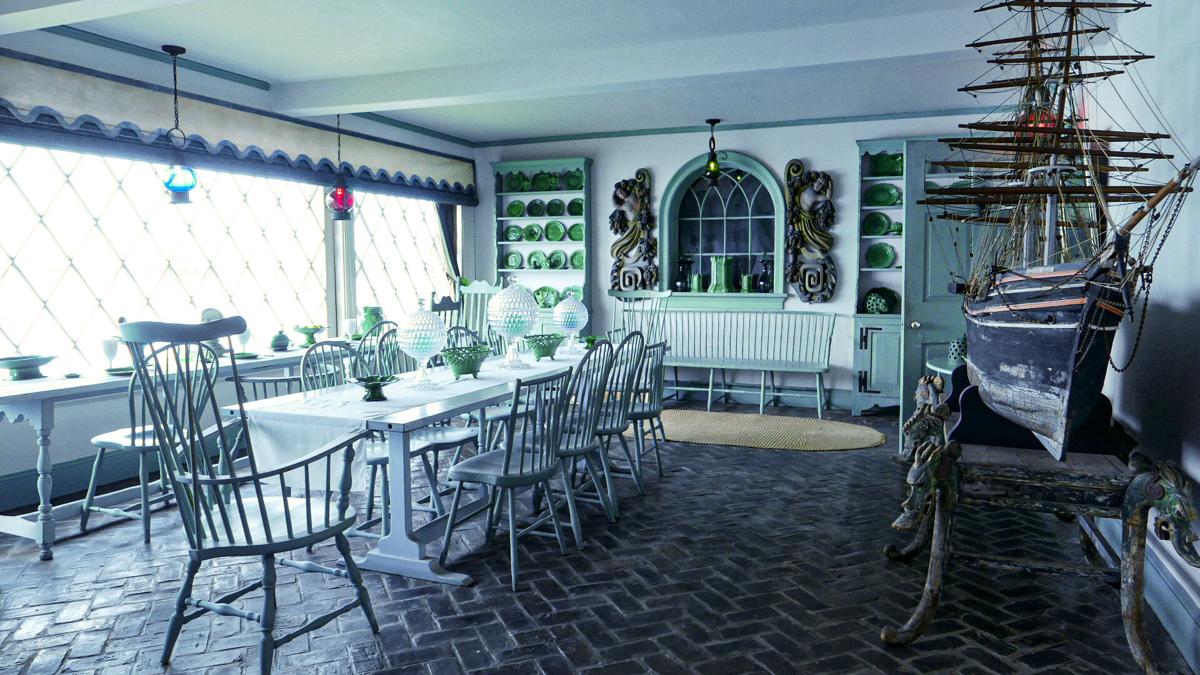 Sleeper's "Golden Step Dining Room" was a favorite for entertaining. The communal table is purposefully narrow to draw guests together, and the entire wall of windows overlooking the water was designed to lower to bring the ocean breeze inside. 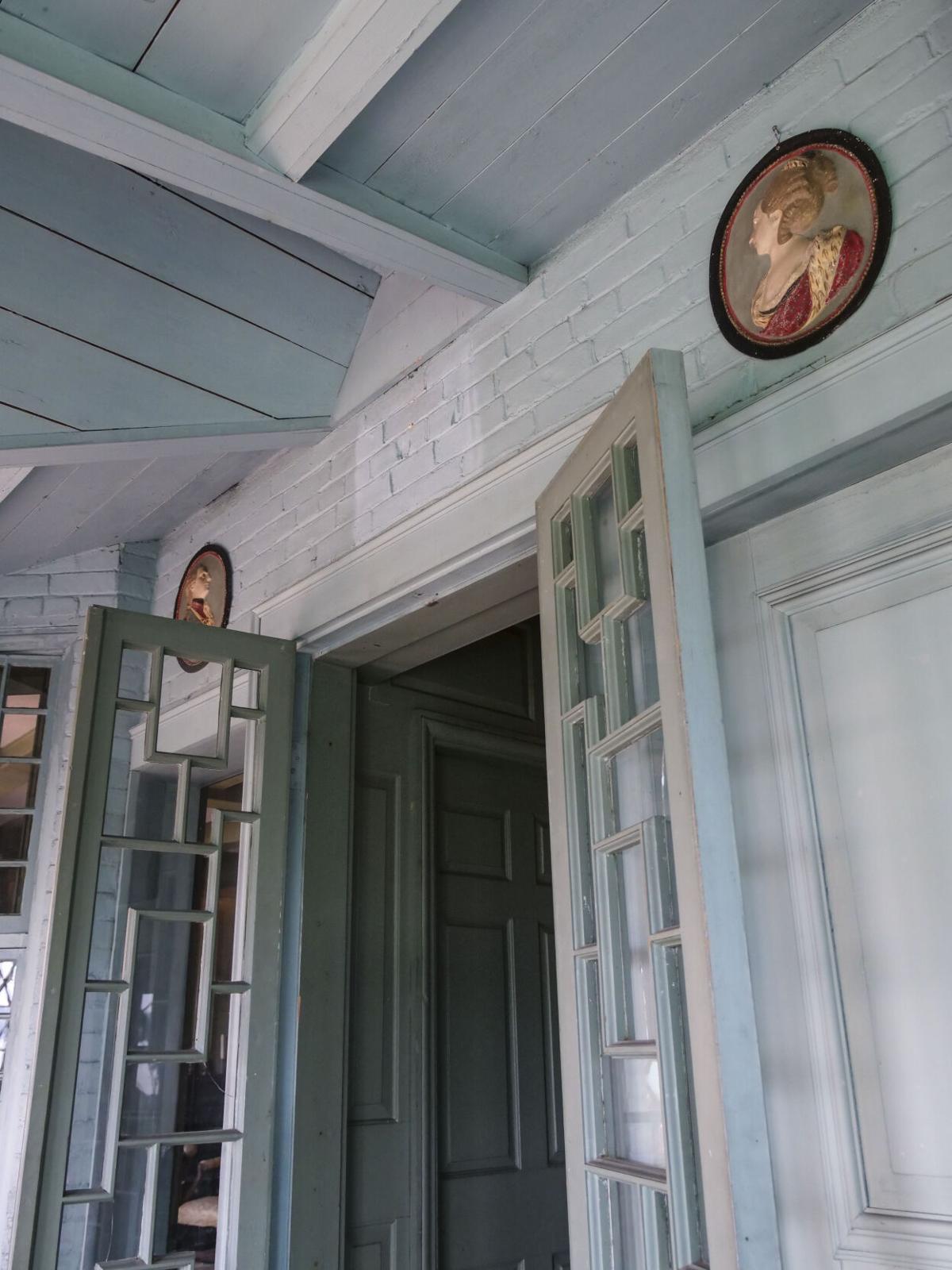 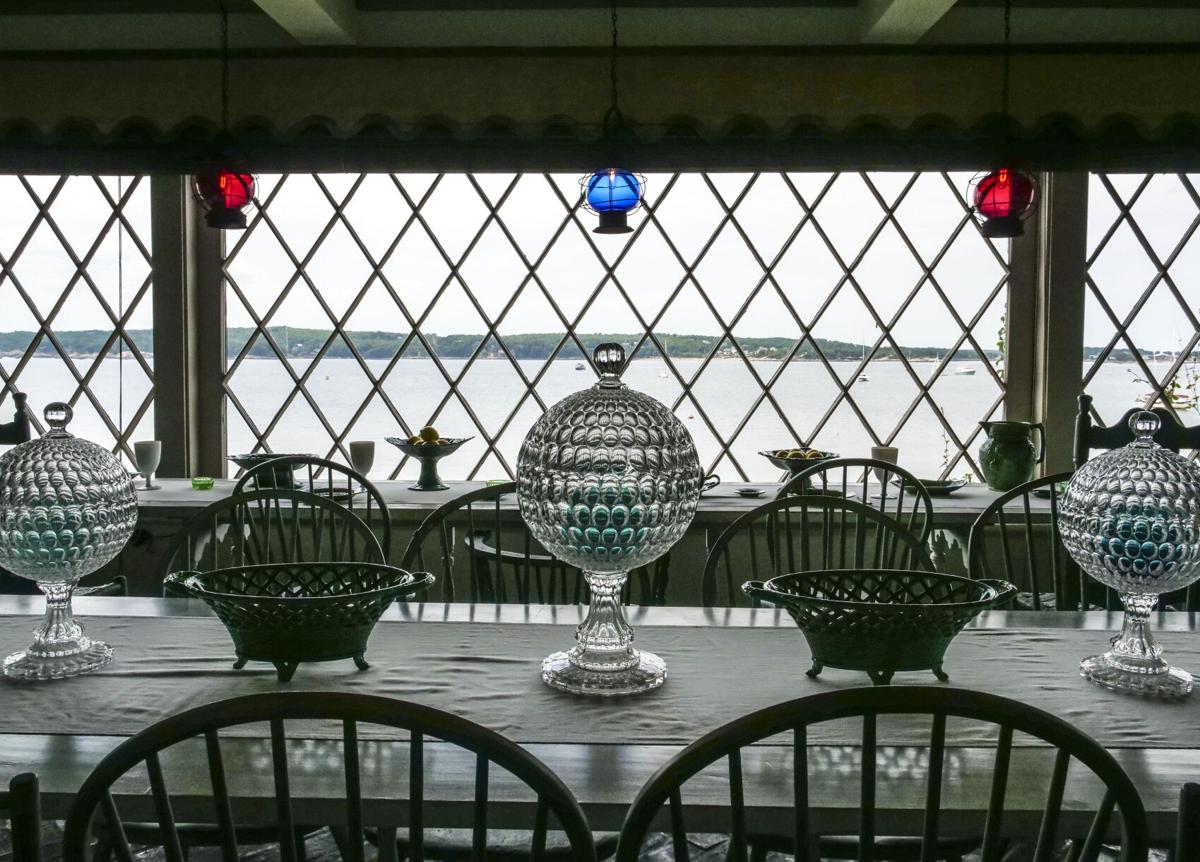 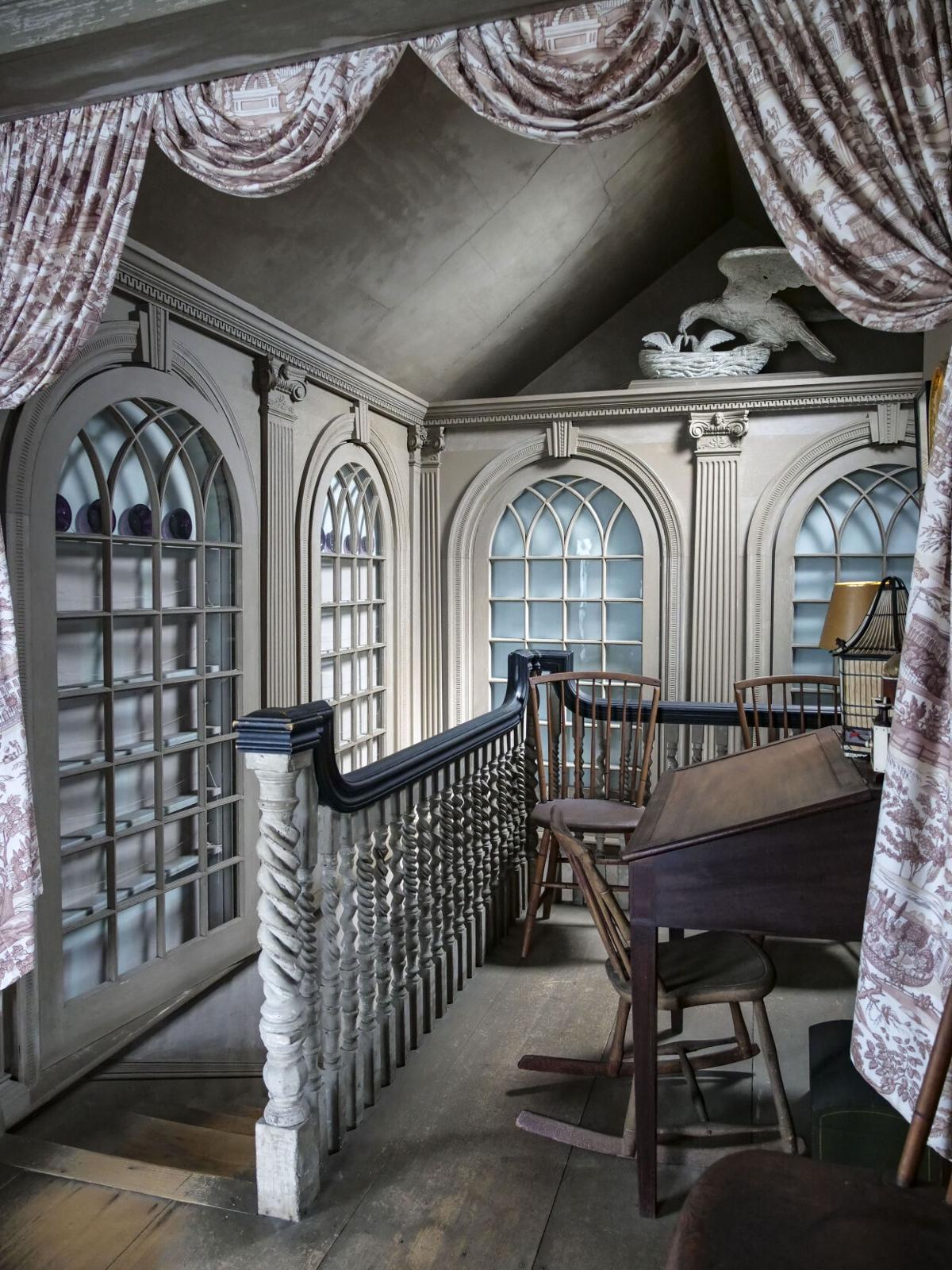 Sleeper turned to Colonial era themes and decor again and again, often mixing and presenting them together. 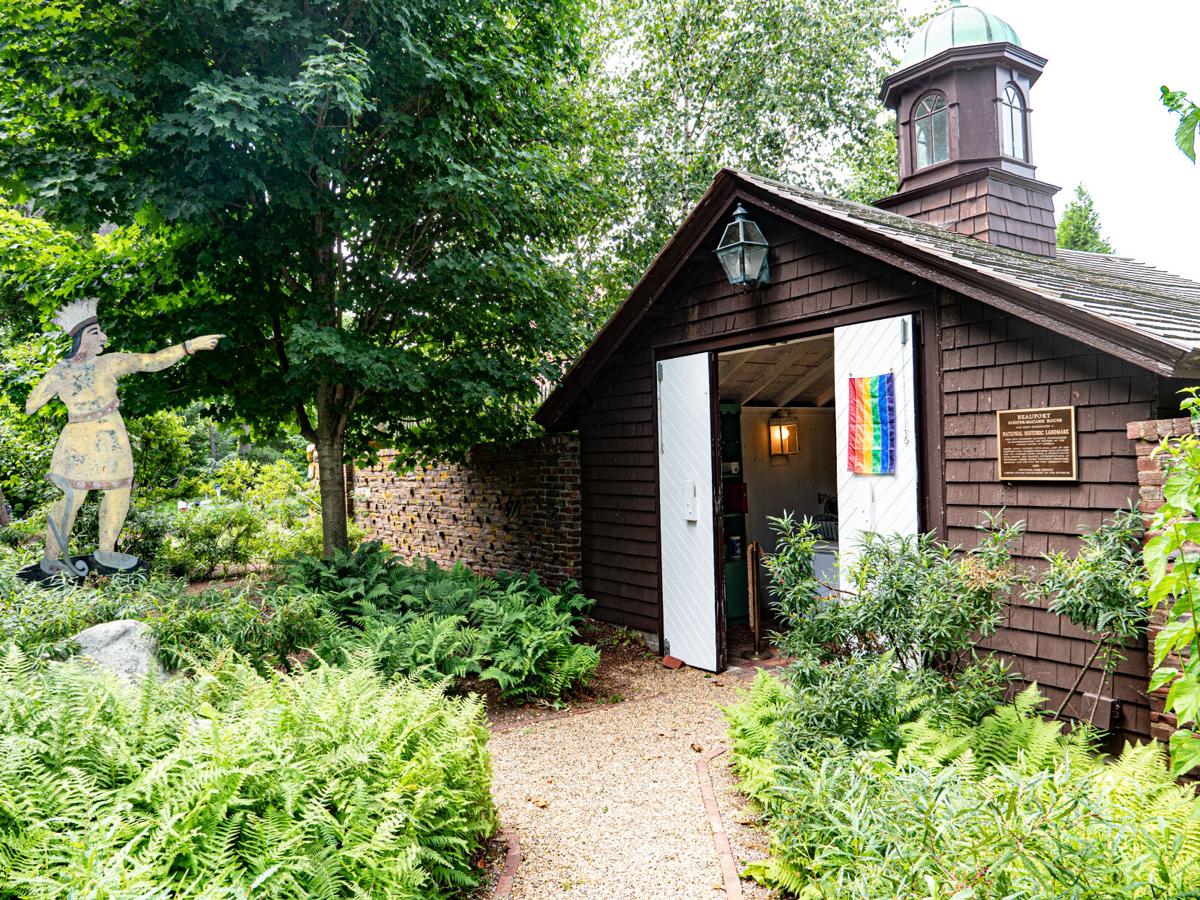 The entrance to the museum belies the grand, 40-room labyrinthian home beyond the doors. 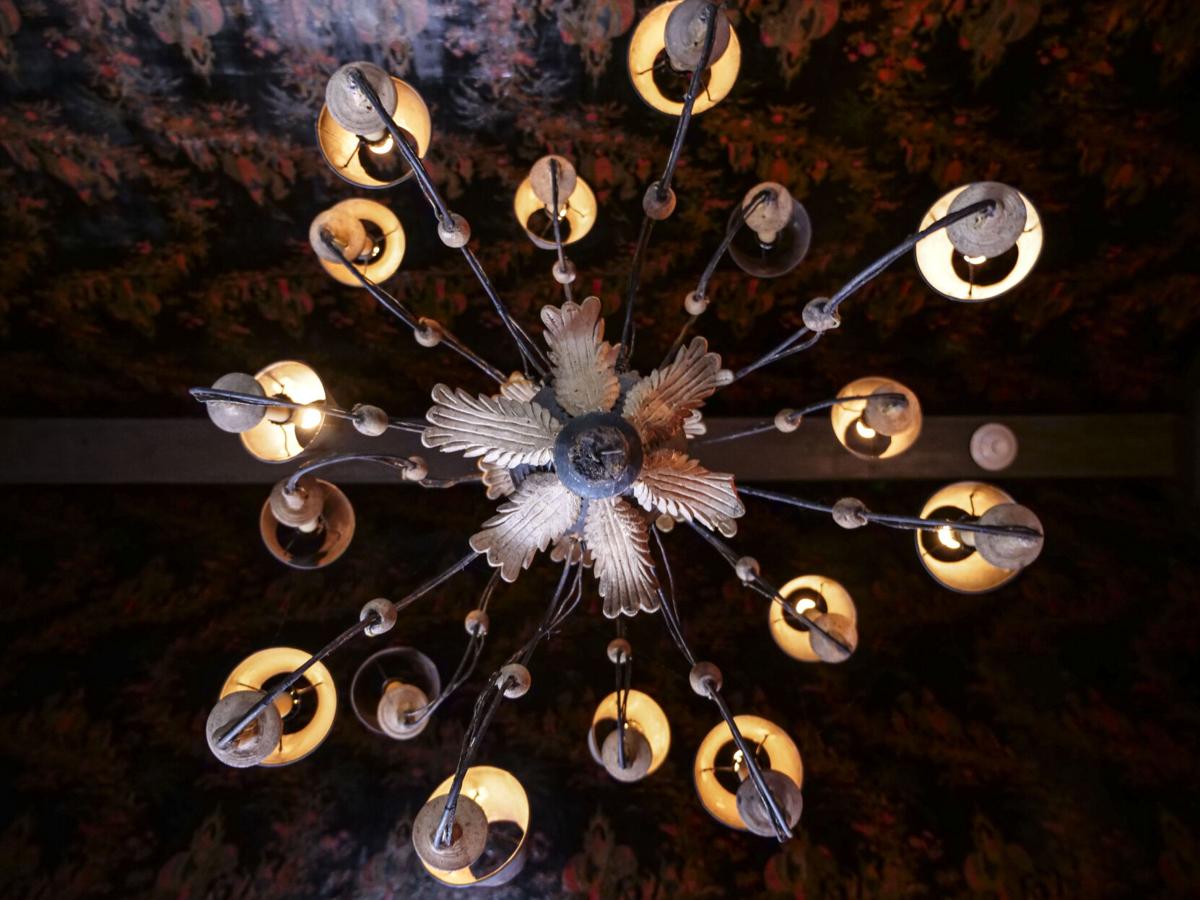 This chandelier presented against a dramatic, red printed ceiling is a centerpiece to a bedroom designed by Sleeper for his mother. 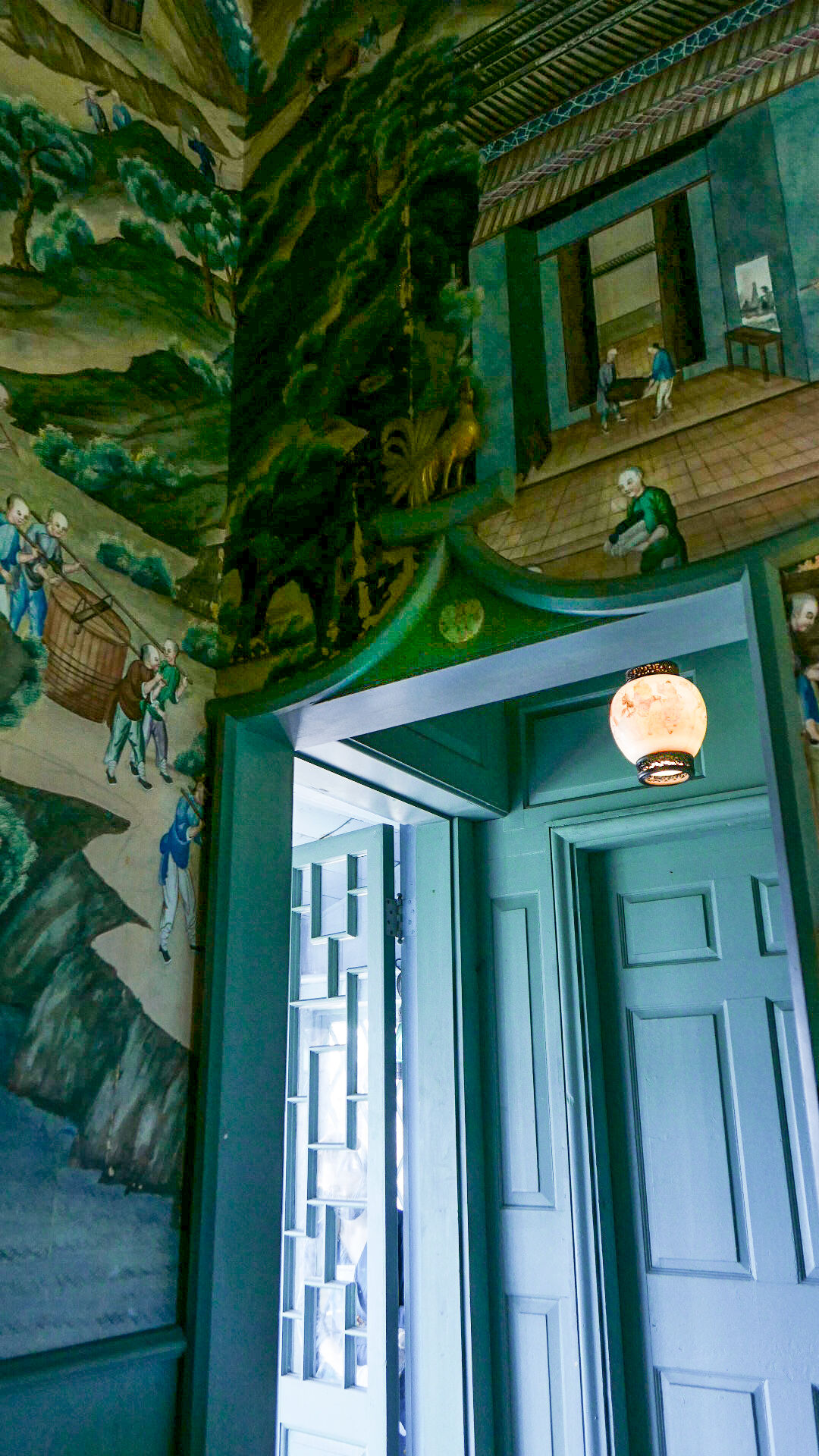 The "China Trade Room" is the most dramatic room in the Sleeper-McCann House in East Gloucester.  The hand-painted Chinese wallpaper was discovered tucked away in a Marblehead attic. 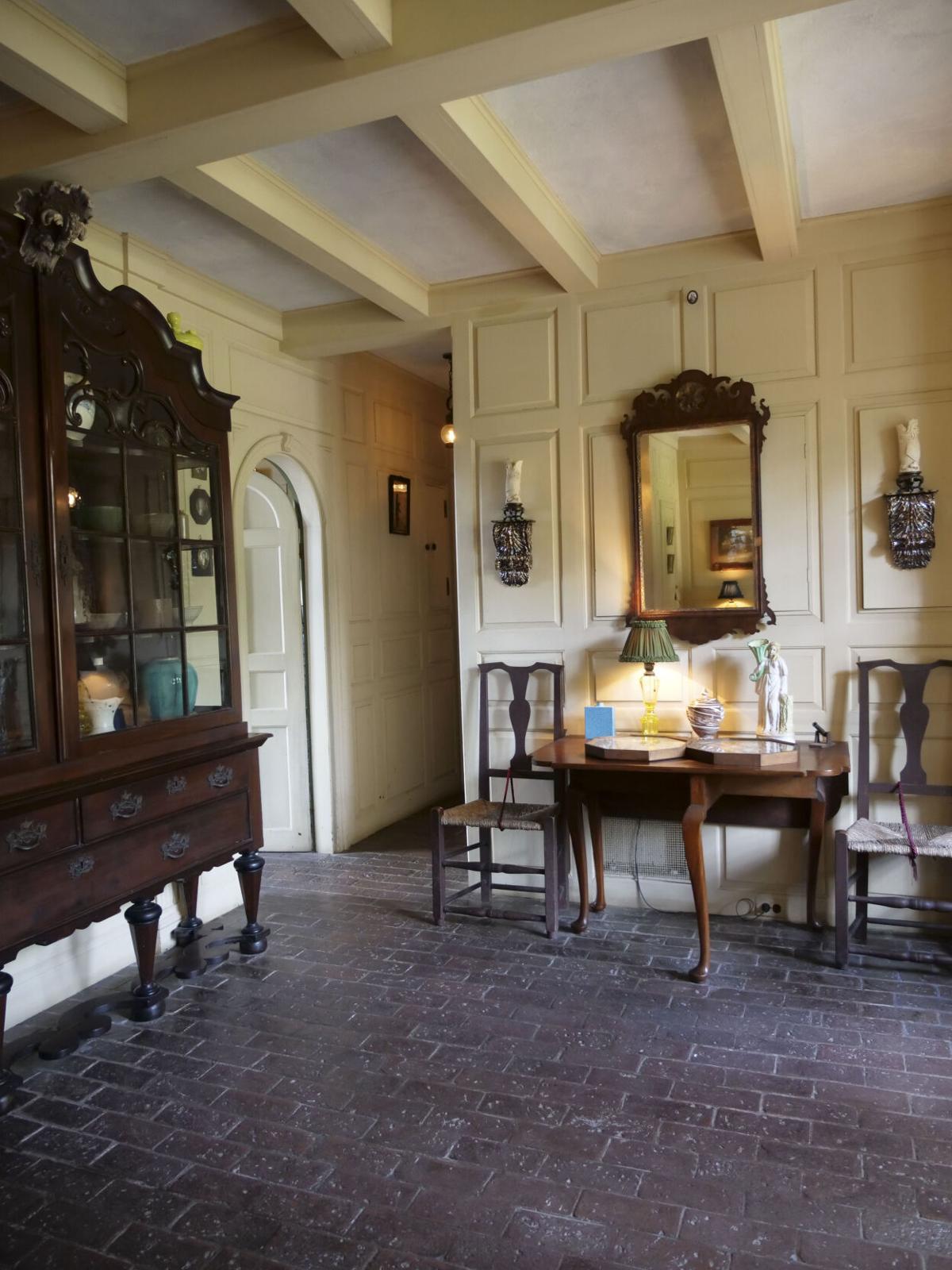 The wood paneling in the home's entry was originally in the William Cogswell house in Essex, before Sleeper repurposed it. 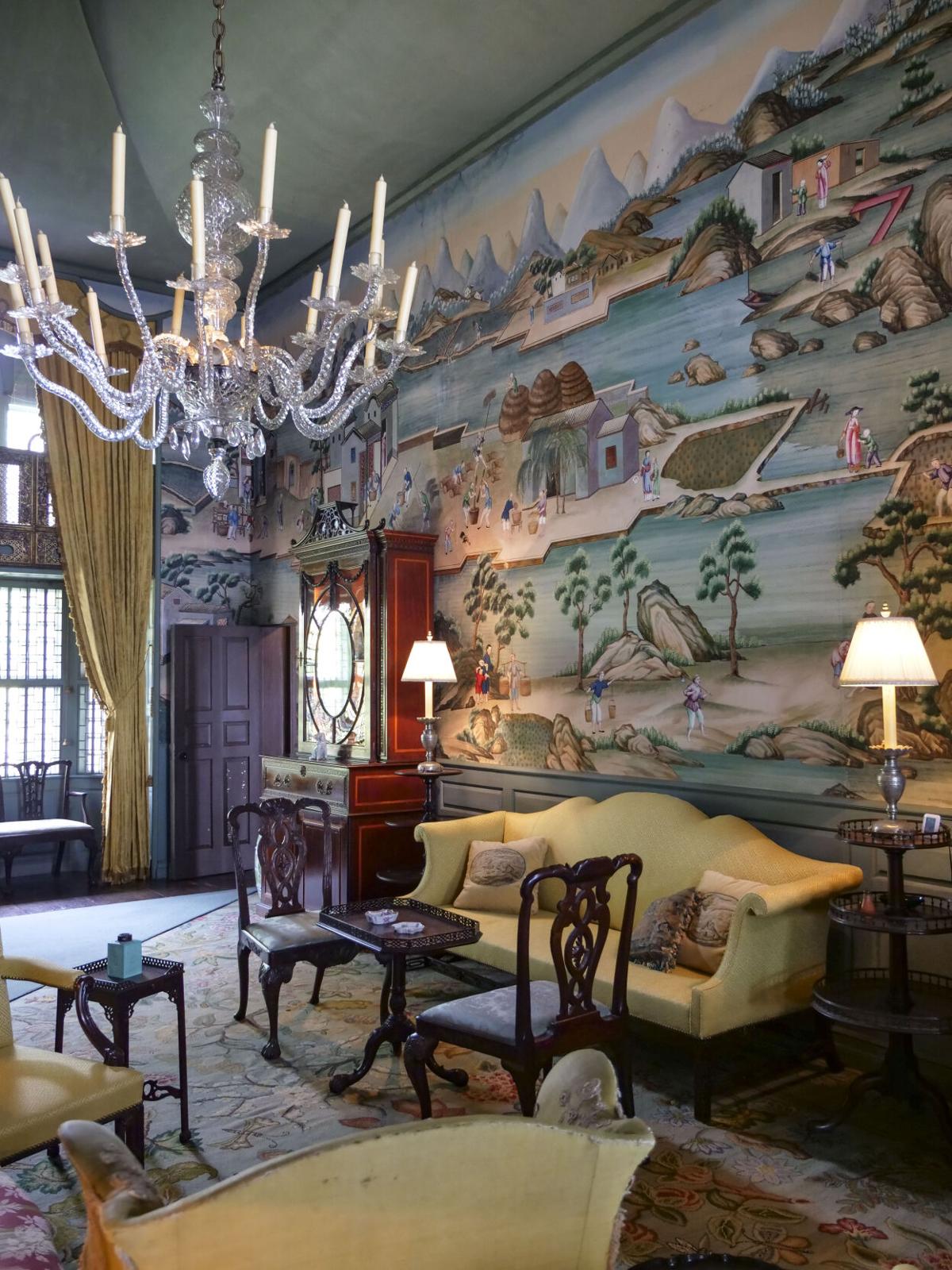 Another view of the "China Trade Room." 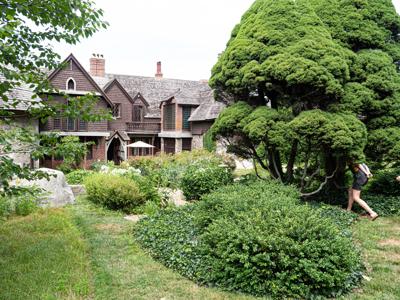 TUCKED DEEP INTO Eastern Point, behind a long brick wall on a spectacular and compact property overlooking Gloucester Harbor is something of a discovery, even for locals.  It’s a winding, 40-room stone, clapboard and stucco home that has been a showcase and inspiration to many of America’s most recognized home decorators.

We’re describing, of course, Beauport, the Sleep­er-McCann House, Historic New England’s property that has been open on a limited basis to groups of four or less since mid-sum­mer for museum tours.  The socially distanced tours are 45 minutes long, led by a museum docent, and advanced reservations are re­quired.  It offers an example of one of the few silver linings of COVID-19.  Museums that have managed to stay open to the public offer intimate, in­credibly special experiences that may never happen again once life returns to its regular pace.

“We made an assessment of which properties were suited for safe access to the public, and the Beauport Sleeper-McCann House was one of them,” said Martha Van Koevering of Historic New England and site manager of the museum.  “We found with a little cre­ativity, we could continue on a limited basis but make it re­ally special.”

And special is.  Besides offering regular tours, His­toric New England opened Beauport this summer to rent for small, out­door gatherings in one of the property’s cloistered gardens or waterside courtyard.  (Oth­er museums, like Magnolia’s Hammond Castle, did the same).  The organization also adjusted its highly popular “Nooks and Crannies” tour that offers extended, deeper versions of normal tours at Beauport.  Van Koever­ing said the museum scaled down the tour both size and length, and scheduled one in August and a second just this week.  Both sold out quickly.  No wonder.  They offer a private experi­ence that feels like the muse­um was closed “just for you.”  As with regular tours, all specialty programs require online reservations ahead, and participants must adhere to safety protocols associated with CDC guidelines.

With all these details on programming, we wouldn’t want to miss sharing details on why the Beauport, the Sleeper-McCann House, a museum since 1942 and one of only two National Historic Landmarks in Gloucester, is so special.  Henry Davis Sleep­er, known as Harry, was born in Boston in 1878, the young­est son of a wealthy family.  His real estate trust pro­vided Sleeper with income to collect art, and financed the beginning of Beauport, his summer home built in 1907 to be near friends.

Sleeper’s interest in design started locally, and deeply.  He was director of museums for the Society for the Pres­ervation of New England An­tiquities, (now Historic New England), and a founding member of the Shirley-Eustis House Association. In 1914 and 1915 he assisted in the re­construction of the Our Lady of Good Voyage Church in Gloucester.

As Sleeper’s professional career as an interior de­signer and decorator grew, it brought Beauport attention from the media, friends, and eventually cli­ents.  Sleeper was clearly one of America’s earliest celebri­ty designers, and in nearly every way, his approach to design enthusiastically dis­carded expected (and rigid) methods of art collecting, architecture and design.  He often purchased architec­tural remnants from razed estates or properties and re­used them in projects, often where they don’t belong or weren’t intended.  Beauport, for instance, has several inte­rior doors that were original­ly grand, exterior entrance doors from other proper­ties.  Beauport also has no hallways anywhere.  Sleeper didn’t like them.

Sleeper would break dec­orating rules in countless other ways, like drilling holes into dining or farm tables to permanently secure electri­cal lamps exactly where he deemed they belonged.  He collected art and objects that he enjoyed, and grouped them together in ways that pleased him.  Glass objects of all shapes are grouped against a back-lit window according to color (not age or manufacturer).  And Sleeper felt free to pair a priceless object with an ordinary find he picked up antiquing at flea markets with his mother.  In the “Octagon Dining Room,” which Sleeper dedicated to close friend Isabella Stuart Gardner, these collections are dramatically displayed against black walls, including a series of blood red tinware collected in Paris (which Sleeper wrote about in an update to Gardner) and amethyst colored glass­ware that greets guests at the room's en­trance.

There are countless other examples of innovations and approaches to home décor that are still consid­ered “modern” that were pioneered by Sleeper early in the 20th Century and on display at Beauport.  Over nearly four decades, Sleeper expanded Beauport significantly, spooling out ad­dition after addition to create a labyrinth-like show house for prospective clients to appreciate the spectrum of exhibits to his talent.  One of Sleeper’s clients was the industrial­ist Henry Francis duPont, at the time one of America’s biggest art collectors.  And in the 1930s, when a coffee company featured “surpris­ingly domestic well-known bachelors” like Gary Cooper and Richard Haliburton in a national ad campaign, it in­cluded Henry Davis Sleeper.  Nearly one hundred years later, award-winning designers from around the world make the pilgrimage to Gloucester for inspiration.

Amazingly, the house is a per­fect preservation of Sleeper’s professional ethos and pri­vate life.  It’s like the whole property was dipped in amber.  When Sleeper died with no heirs in 1934 from leukemia, interior design was hardly deemed an art form worthy of preservation.  Thankfully it was purchased by Helena Woolworth Mc­Cann, wife of Charles E. F. McCann of Long Island and enthusiastic collector of European art and export porcelain.  She understood the charm and historical significance of her new American find.  McCann moved into the property, and kept it and its contents almost entirely intact, unchanged.

In fact, when Henry Francis duPont heard of the purchase, he wrote Mc­Cann congratulating her and offered his thoughts on the house.

“Naturally the minute you take the things out of this house, or change them about, the value of the collec­tion does not exist,” he wrote her.

Historic New England’s Beauport, the Sleeper-McCann House is at 75 Eastern Point Boulevard on Eastern Point in Gloucester.  See hours and reserve a visit at HistoricNewEngland.com.

Going into fall, visiting local museums is a great way to safely escape your daily routine.  Some remain closed (think Cogswell’s Grant or the Essex Shipbuilding Museum, both in Essex,) but there are plenty to choose from in the area that are offering limited visits, all within safety guidelines.

Sleeper was clearly one of America’s earliest “celebri­ty” designers, and in nearly every way, his approach to design enthusiastically dis­carded expected (and rigid) methods of art collecting, architecture and design.

The Cape Ann Museum is preparing to re-open its main campus at 27 Pleasant Street to the public on Oct. 1 with new safety precautions for social distancing, reduced capacity, touch-less doors, increased cleaning, and other measures that adhere to Gov.  Baker’s Phase 3 re-opening plan and to protect the public while enjoying the Museum’s renowned art and maritime collections.