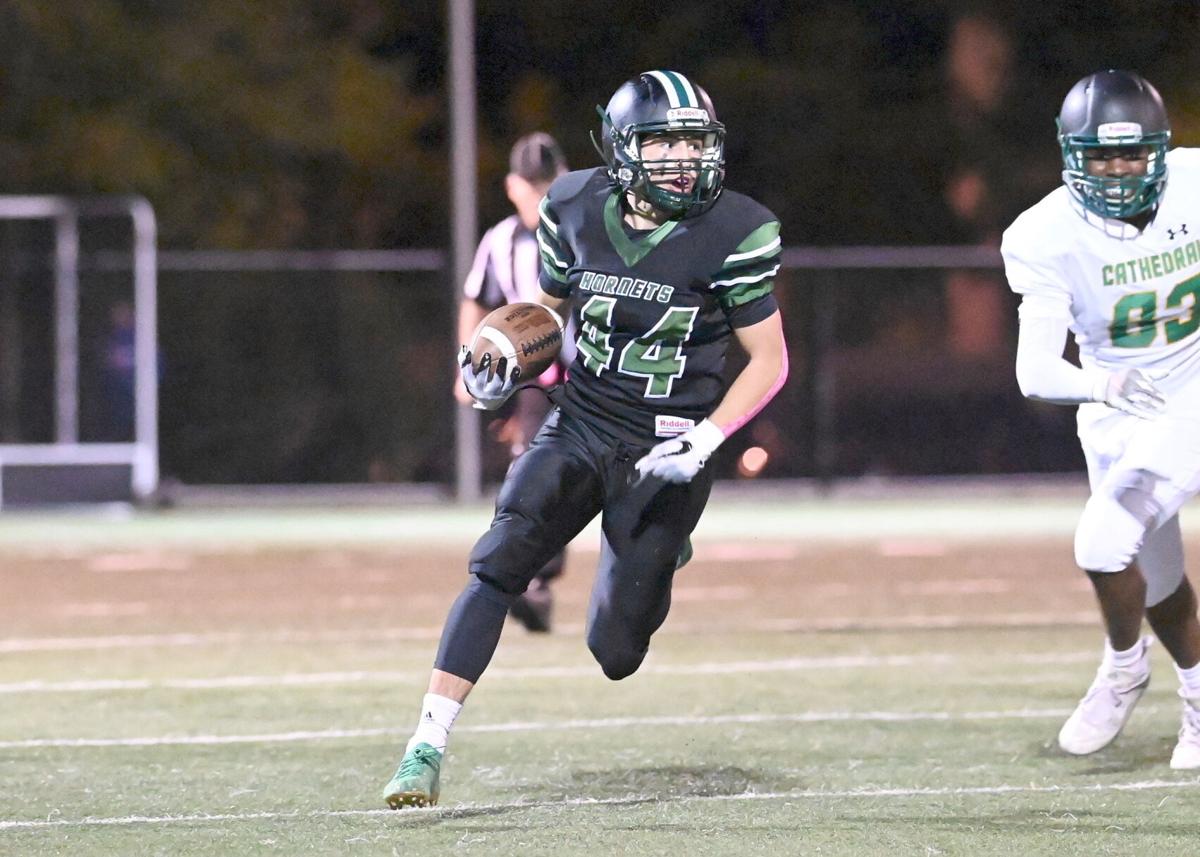 ME Hornet AJ Pallazola returns a punt for 44 yards in Friday’s 43-14 win over Cathedral High. 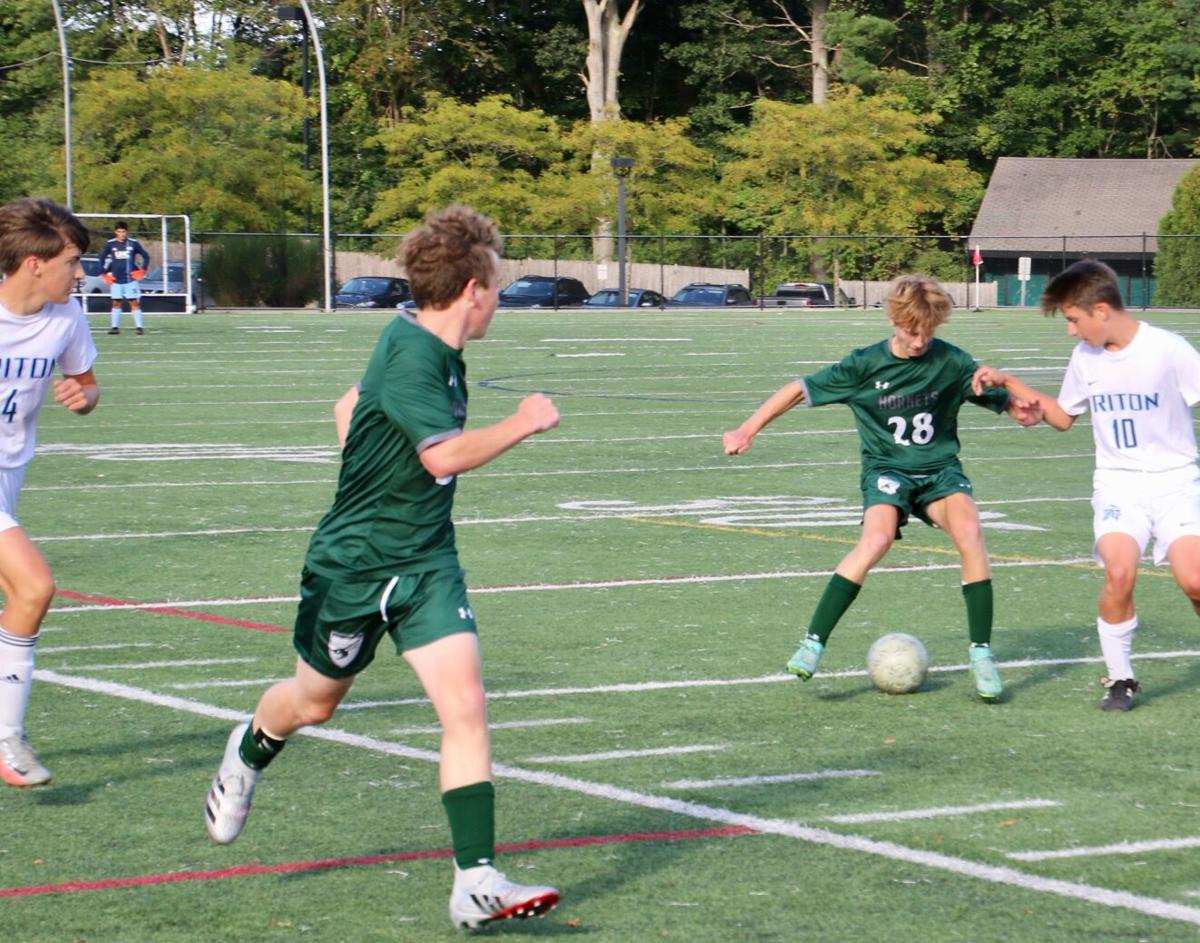 ME sophomore Becket Spencer eludes the Triton defense in a home match, September 30th. The Hornets prevailed over the Vikings 8-0.

Here's all the happenings for MERSD Sports for the week of 4 Oct. 2021.

Saturday afternoon, September 25 had the gridiron Hornets taking on the Lynn Tech Tigers at Manning Stadium in Lynn.  The Hornets came out firing with a seven-play opening drive which ended with a 10-yd touchdown run by junior Jesse Oliver.   Lynn Tech showed tremendous grit and scored back-to-back touchdowns to take the lead early in the second quarter.

But the Hornets we able to respond and scored two unanswered touchdowns to close out the half with a 19-16 lead thanks to some great quarterback play by junior Brennan Twombly and remarkable performances by wide receivers sophomore Henry Thurlow and senior AJ Pallazola.

The Hornets were able to subdue the Lynn Tech ground attack in the second half with great, tough team play by the defensive line and linebackers who really excelled against a big and tough group from Lynn Tech.

The play of the day was a 55-yard punt return for a touchdown from Pallazola, his second special teams’ touchdown in as many games and his eighth touchdown over all.  The Hornets held on for a 32-22 victory to improve to 3-0 on the season.

The JV Hornets also won their game last Monday vs. Nashoba Valley Tech's JV squad.  The emergence of key freshman and sophomore leaders bodes well for the future of the football program as the JV Hornets improve to 2-0 with two convincing wins against Shawsheen and Nashoba Tech.

In a big match up against (formerly undefeated) Triton, the Hornets worked as a team to end their win streak and dominate possession. The first goal was scored by Amy Vytopilova off a corner shot, and in the third and fourth quarter Torrin Kirk and Ava Magnuson sealed the deal. A notable mention for Torrin Kirk and her work on the team’s defensive press, as well as Phileine DeWidt, Helaina Davis, Hadley Levendusky and Calista Lai for their solid defending on Triton’s quick transitions.

On Friday, the MIAA released the D4 State Power Ratings and the Hornets are proud to be ranked at Number Two. The team faces Rockport and North Reading away this week.

It was a phenomenal week for the Manchester Essex boy’s soccer team with a 2 – 1 win over Burke and 8 – 0 win over Triton to bring their overall record to 6-3.

On Wednesday afternoon the boys headed into Dorchester to play last year’s Division III State Finalists Burke.  After two hours of traffic and an abbreviated warm-up, the Hornets somehow came out possessing the ball extremely well and creating some chances early.  Burke’s goalkeeper was solid and Burke defended well early.

Against the run of play, Burke struck first on a counter where the Burke left back drove a ball down the left side to their speedy left striker who drove past the defense and right to the Hornet Keeper Theo Parianos.

As the crafty Burke striker was driving end-line toward the goal, his teammate made an excellent supporting run centrally and was there to receive the sliding pass for a tap in.  Unfazed, the Hornets began to possess again forcing a long clearance from Burke.  Finn Lawler seemed to spot the Burke Keeper too far off his line and took a direct strike from distance that the Burke Keeper could not get back to.  As it drifted over his head to tie the match 1-1, the Hornets found new energy.  In the closing minutes, a Burke player was sent off with a red card which had the Hornets able to fully unfurl their passing attack.  In the final minute, Naderson Curtis put a dangerous ball across the face of the goal.  The rangy Burke keeper came off his line to try to collect it, but fellow senior captain Eli Cox picked up the keeper’s bobble and put it home to win the match for the Hornets.

There was no rest for the weary Hornets as they had a day game the very next day against Triton.  Here, the Hornet’s depth showed up brightly to bolster the starting eleven with some extremely solid play.  Senior Captain Beren Schmidt was doling out the assists early along with Eli Cox, Aiden Cunningham and Naderson Curtis as the boys found excellent attacking rhythm throughout the match.  With Cian Doyle scoring two goals, Beckett Spencer adding three more, Brady Gagnon with a goal and an assist, Finn Lawler scoring, and finally freshman Ali Erdogan getting his first varsity goal, The Hornets asserted themselves over the physical Triton side.  Next up for the Hornets is archrival Rockport under the lights at Rockport.

Next meet is October 6 against Ipswich at Crane Beach.

Another tough defeat for Manchester-Essex girls’ soccer, 0-1 to Georgetown, to begin the week Monday. The lone goal in the game came with 6:30 left on the game clock.  Disappointing, as the Hornets had so many scoring opportunities they couldn't finish. The Hornets were led by Maddy Curran, Amelia Donnellan (Player of the Game) and keeper, Madi Cook, with 10 saves.

The Hornets ended their losing streak with a 0-0 tie against Triton. Freshman Keeper, Madi Cook had six saves and freshman Libby Lawler (POTG) had a very strong game at center midfield.   The Hornets finished off their week with their last out-of-conference game, losing to Swampscott, 3-0. The Hornets’ offensive attack was strong all game, but still having a hard time finding the back of the net. Mechi O’Neil (POTG) had a strong game at forward. Freshman, Tori Moulton, played well at center back against a strong Swampscott offense.

The Hornets found their way back into the win column with a strong 1-0 win over Rockport on Monday, October 4 with Freshman Ella Arnsten finding the back of goal off a corner kick from Pippa Spingler in the first half. Madi Cook had 7 saves, Kendall Newton and Amelia Donnellan had standout performances.