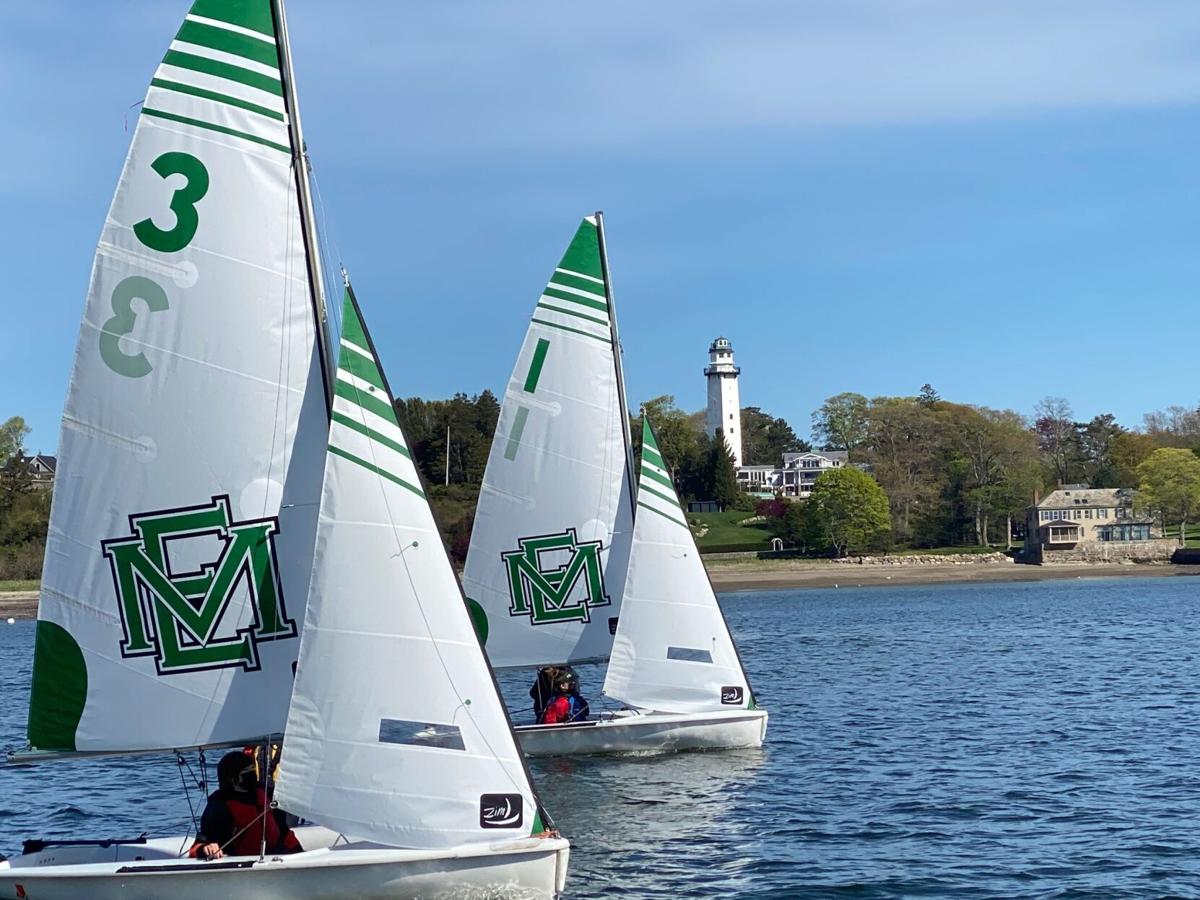 The school logo on the beautiful new North sails which used for the first time in our competition on Friday May 7th. 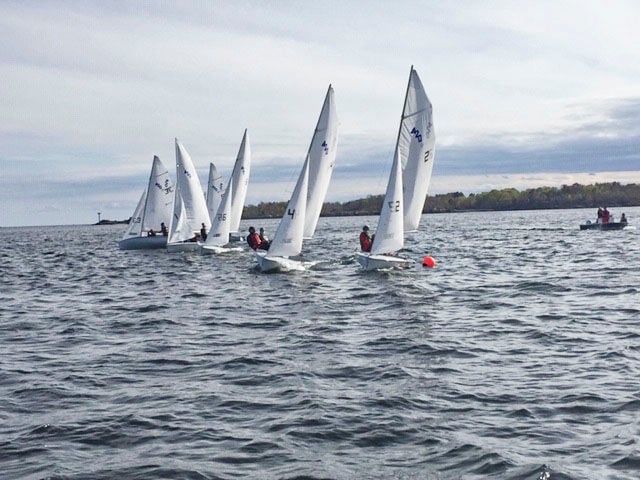 You can see the ME boats with sail numbers 2, 4, and 6 leaving the starting line on starboard tack with good speed, while Landmark’s 1 and 3 and 5 (hidden) are behind and tacking away to clear their air. Ava Rizzico is steering #2, Anna Brzezinski is at the helm of #4, and Lynn Benali is steering #6.

ME vs. Landmark at Manchester

The Hornets Sailing Team went up against Landmark on Friday, May 7 in an exciting series of six races.  The conditions were exceptional, with brisk winds from the East, and calm seas in the lee of House Island.  We set up the “Digital N” course in the center of the outer harbor, finishing close to Nun #4 at Half-Tide Rock.

Nerves were high at the start, since this was not just a friendly scrimmage, but a match that counted in the scoring of the Northern Division of the Mass Bay League.  The competition was characterized by “boisterous” exchanges between opposing skippers as they asserted their “right of way” according to the official Racing Rules of Sailing.  Almost as loud were the calls from skippers asking for help from team-mates to get a pesky competitor off their wind or trying to set up mark traps.

There were frequent lead changes both upwind and down, as skippers and crew focused on both keeping the boat moving quickly in the right direction, and on the competition and helping team-mates.  There were, of course, the occasional lapses of concentration, such as a skipper tacking on a windshift without realizing they were about to hinder a team-mate, or worse, foul a competitor.

After the decisive third race, we shook things up a bit by substituting younger sailors for the first-string crews on boats 1 and 2 and swapping in a new skipper and crew for boat 3.  As a coach it’s difficult to change crew in the middle of a meet, because it can upset the familiar routine of a skipper and crew, but it is important to give the younger and newer sailors a chance to perform in outside competition.  At the end of the day the newer sailors were clearly pumped up about racing against another team and scoring points for Manchester-Essex.  Equally, the crew who were swapped out were chomping at the bit to get back into the boats and continue the battle.

An accompanying photo shows the level of competition at the starts.  You can see the ME boats with sail numbers 2, 4, and 6 leaving the starting line on starboard tack with good speed, while Landmark’s 1 and 3 and 5 (hidden) are behind and tacking away to clear their air.  Getting off the line quickly with a good start is key to winning a team race.  Ava Rizzico is steering #2, Anna Brzezinski is at the helm of #4, and Lynn Benali is steering #6.

Our starts were much better than last week, our boat speed is faster, and tactics are better executed.  We will have two more days to practice before we host Pingree on Wednesday and race Gloucester High on Thursday.