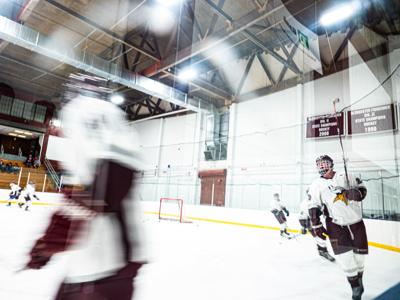 On Saturday, members from several Masonic lodges took to the Dorothy Talbot ice rink at the O’Maley Middle School to be thanked for sponsoring this season’s uniforms for the Rockport varsity hockey program.

This past fall, parents of the Rockport Vikings program reached out to the Masons to explore whether the organization could assist with a fundraiser to help with new uniforms.  With 24 players slated for the upcoming 2019-20 season, uniforms were a strain.

Todd Crane, master of Manchester Lodge, reached out to his counterparts at surrounding lodges in the district, including John T. Lodge of Ipswich, Tyrian Acaica and Ashler Lodge of Gloucester, and Mount Tabor Lodge, which shares the building in Manchester.  This is not something the Masons do annually or have even done before.  The situation of the four towns and four lodges just made sense for all.  Ashler Lodge, formally of Rockport, joined the Gloucester in the early 2000s, forming a lodge on the Cape Ann. TAA Lodge, now known, and the other lodges involved, thought this would be a great thing for the hockey team and to reach out to the members of the fraternity from Rockport.

They discussed several options and came up with a solution of each lodge donating $500 or more.  In the end, the lodges raised $2,300 in a short time from individuals reaching into their pockets and the lodges going into charity funds.

The Vikings have a great season in store, with worthwhile games scheduled at the team’s home ice at O’Maley and around the North Shore and Boston area.  Check out a game sometime.

The Vikings and The Masons