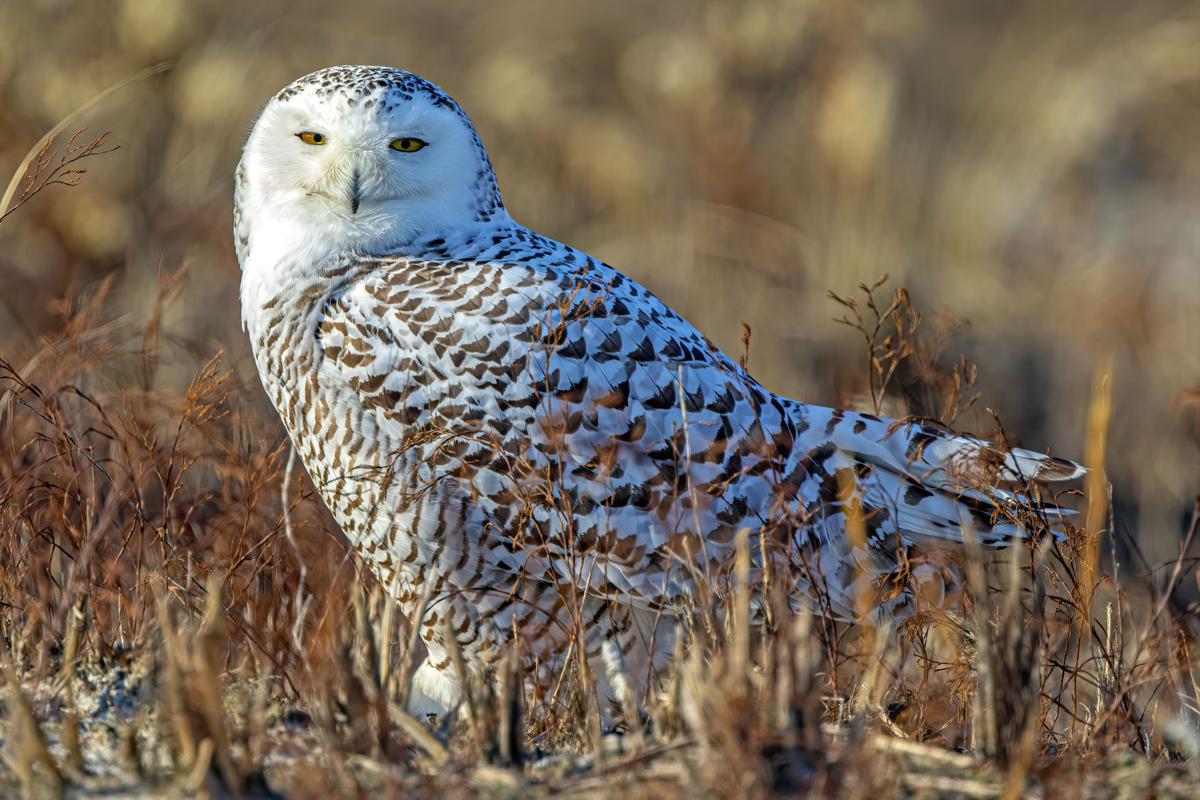 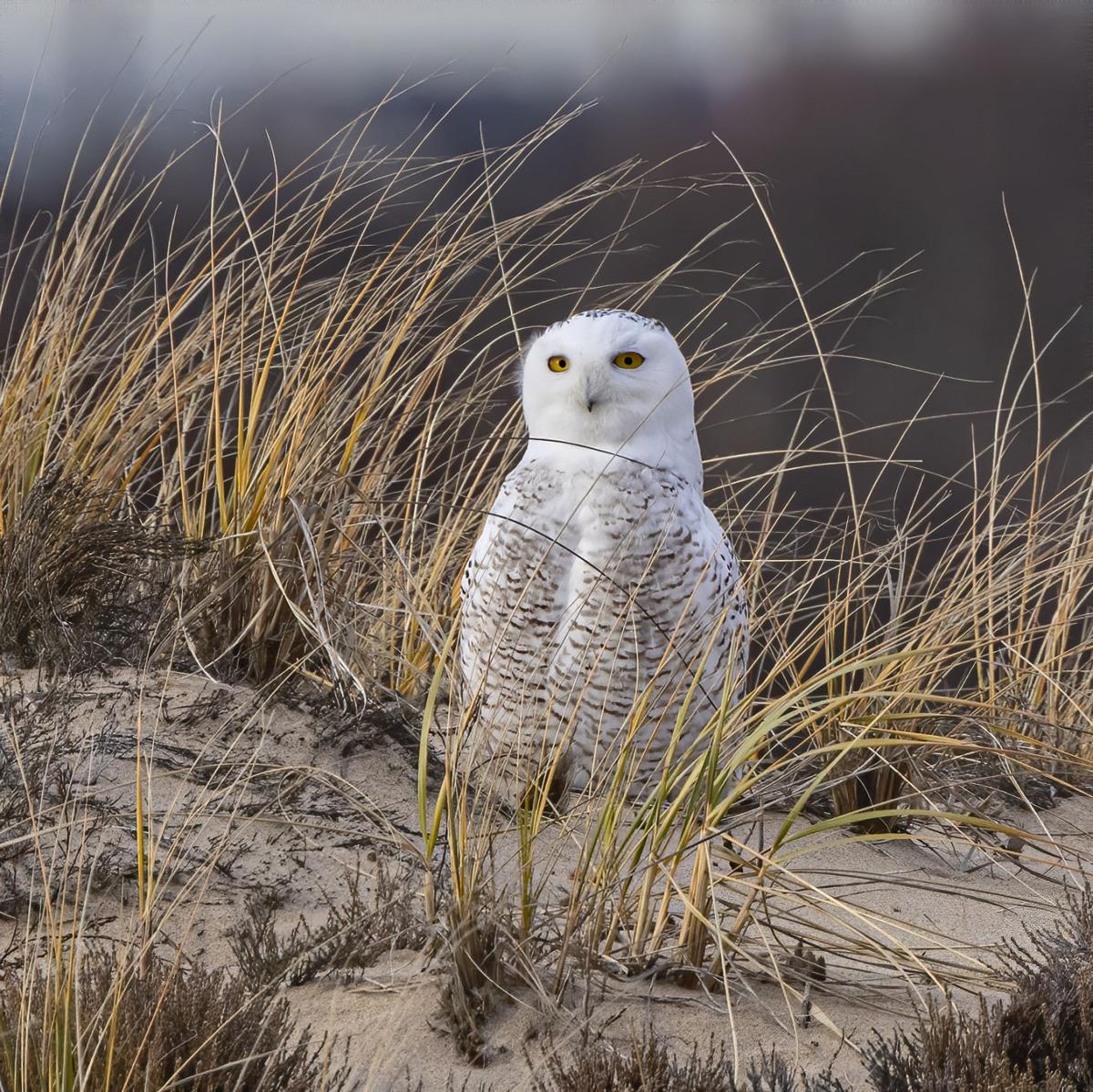 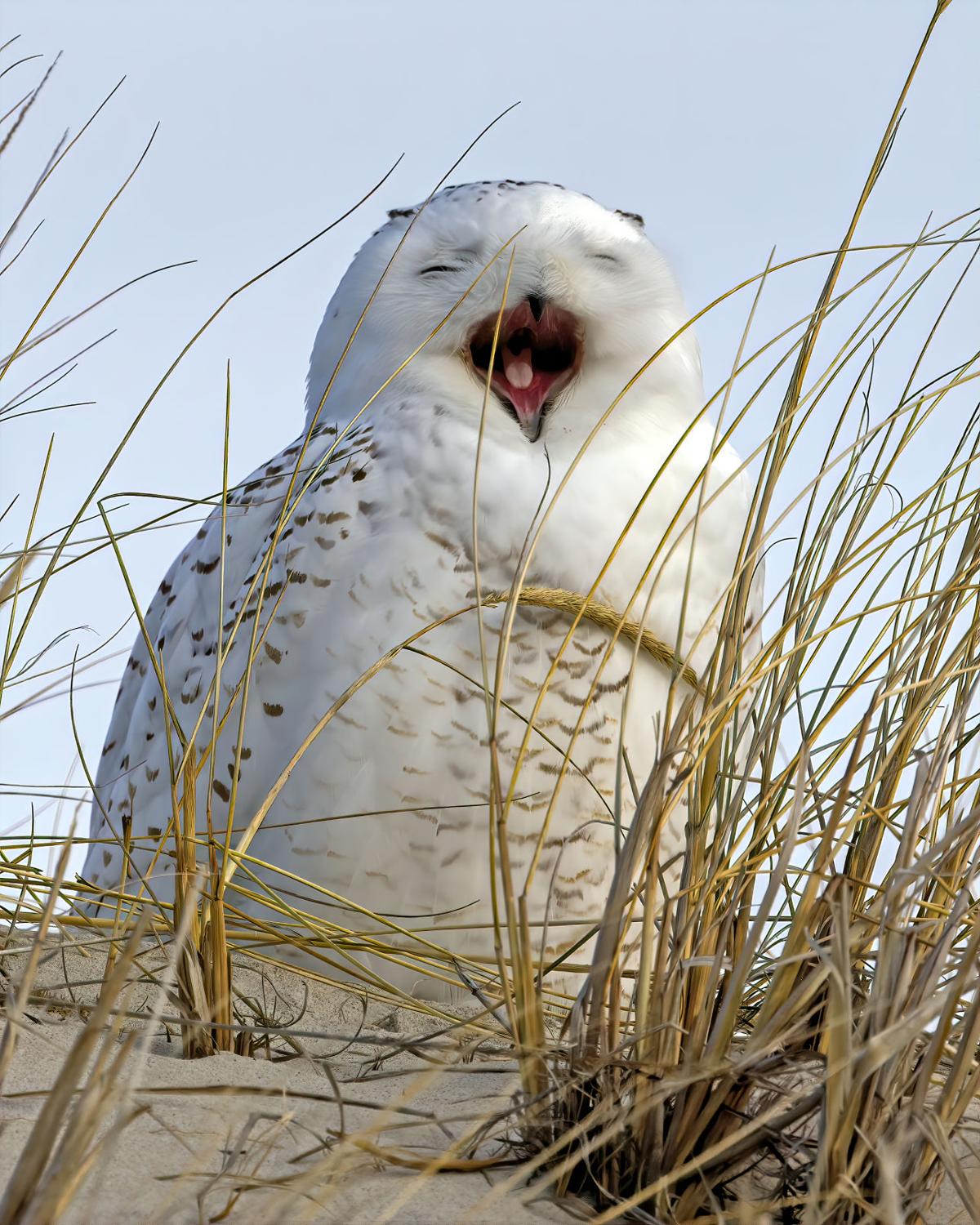 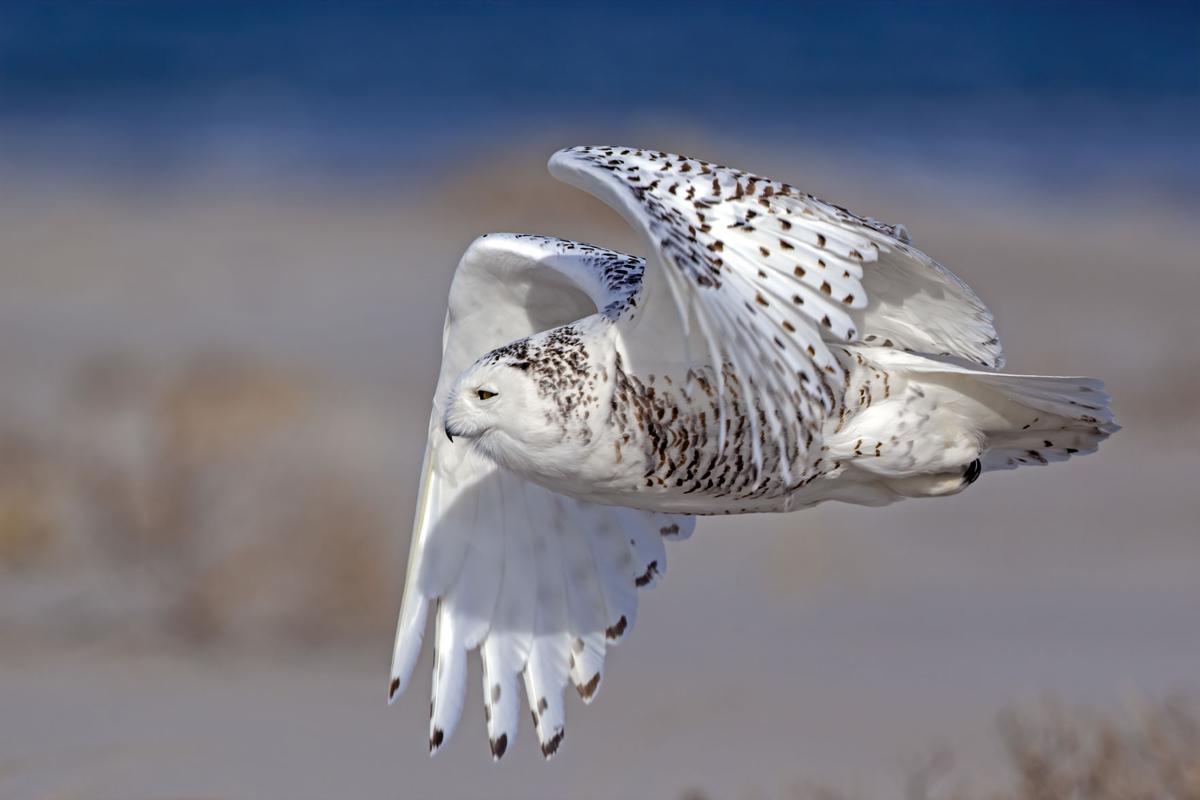 “They appear from nowhere — stoic sentinels of fields, farmlands and shorelines. For a time, they become part of the landscape, but soon they will be gone.” – Gerrit Vyn, Wildlife Photographer

Each autumn hundreds if not thousands of snowy owls abandon their native habitat in the arctic and head south for the winter, many traveling more than 3,000 miles. Ecologists call this phenomenon an “irruption,” a sudden redistribution of an animal population caused by a change in food sources. In coastal Massachusetts, the first snowy owl sightings usually occur in November and by April most of the owls are winging their way back to their tundra homes in Northern Quebec or Baffin Island.

I saw my first snowy owl in the dunes of Crane Beach just last December. There is something about this bird that commands the respect and fascination of birders and non-birders alike. Naturally, they are also a prized subject for wildlife photographers. The accompanying photos were taken at Crane Beach over the last few winters by my friend, Carl Jappe of Ipswich.

According to Mass Audubon, the snowy owl (Bubo scandiacus) features “a striking white exterior accented by dark markings and a wingspan that can measure close to five feet.” Unlike most owl species, snowy owls hunt during the day, a necessity in the Land of the Midnight Sun. Up north their primary food source is lemmings, supplemented by other small mammals and birds. It was long assumed that the snowy owls we see down here were nearing starvation, driven south because of a drop in the lemming population. In fact, the opposite is true. We now know that increases in the number of owls we see is a result of a booming lemming population and a corresponding increase in owl fertility, forcing many of the youngest birds to head south to avoid competition for food within their own species.

And, how do we know this? Largely because of the extraordinary work of one man, Norman (“Norm”) Smith, who recently retired from his position as sanctuary director of the Blue Hills Trailside Museum in Milton. Norm is to snowy owls as Jane Goodall is to chimpanzees. He has been studying the birds since 1981 and affixing radio transmitters to individual birds since 1999. He has personally captured and tagged over 800 snowy owls! His motivations are both scientific and humane. He’s particularly concerned for the safety of the birds at one of their favorite hunting grounds, Logan Airport. “Owls and aircraft don’t mix well,” he told me.

The number of snowy owls arriving in coastal Massachusetts can vary dramatically from year to year. In the winter of 2013/2014, for example, Norm estimates that over 1,000 birds showed up here. That winter he tagged over 120 birds at Logan Airport alone! On the other extreme, during the winter of 1989/1990 he tagged just one bird.

Snowy owls seem to like coastal Massachusetts because of the abundance of food sources and its similarity to their native tundra. The Crane Beach dunes have a thriving vole population, but the owls are opportunistic feeders and will also feed on ducks and geese. According to Norm, “down here they hunt mostly in the early morning and evening.” Because they lack camouflage they hunt “more like falcons, taking prey on the fly” compared to other owls that hunt in the cover of darkness. They also move around a lot. An owl spotted at Crane Beach one day could be on the South Shore the next day and on Cape Cod the day after that.

The official status of snowy owls worldwide is “vulnerable,” one category above “endangered.” In 2017 an international working group estimated a worldwide population of approximately 5,000 to 7,000 nesting pairs, far fewer than previously estimated. The greatest threat to the birds down here is rodent poison found in their prey. Up north, it’s the changing arctic climate. Average annual temperatures increases cause tundra grasses to be replaced by shrubs, making for a less hospitable habitats for lemmings and, therefore, snowy owls.

There’s another threat to the snowy owls we see in Massachusetts: harassment by well-meaning observers and, especially, photographers. When you see a bird perched on the ground, it’s probably sleeping. If you approach too closely and spook an owl, you are stressing the animal and causing it to burn energy it needs to retain for hunting and for the long flight home. So, please, keep your distance.

The Wild Turkeys Among Us