You are the owner of this article.
Edit Article Add New Article
Home
Subscribe
COVID-19
News
Gallery
Out and About
Homes
Expert Help
Sports
Long Ago
Obituaries
Classifieds
Share This
1 of 5 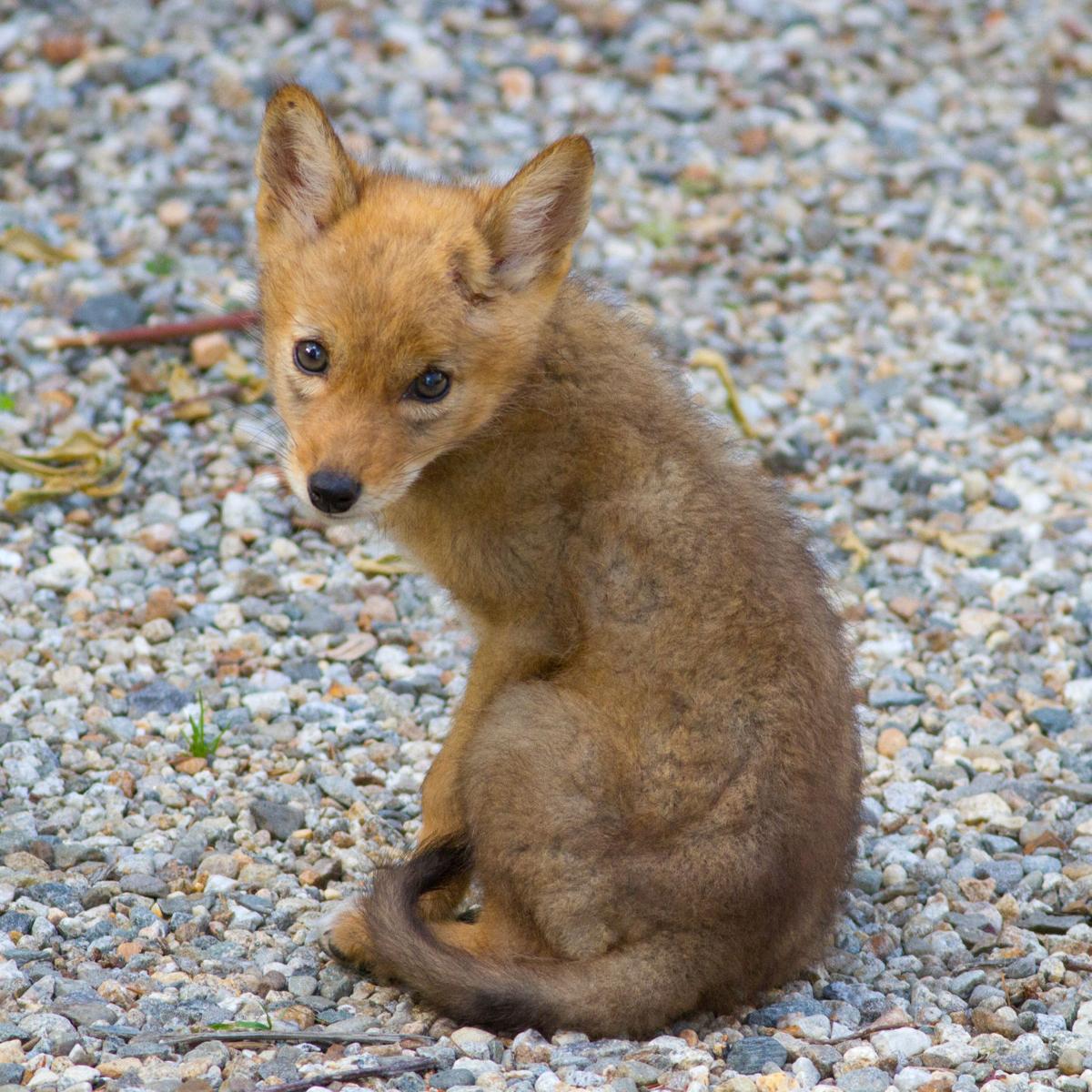 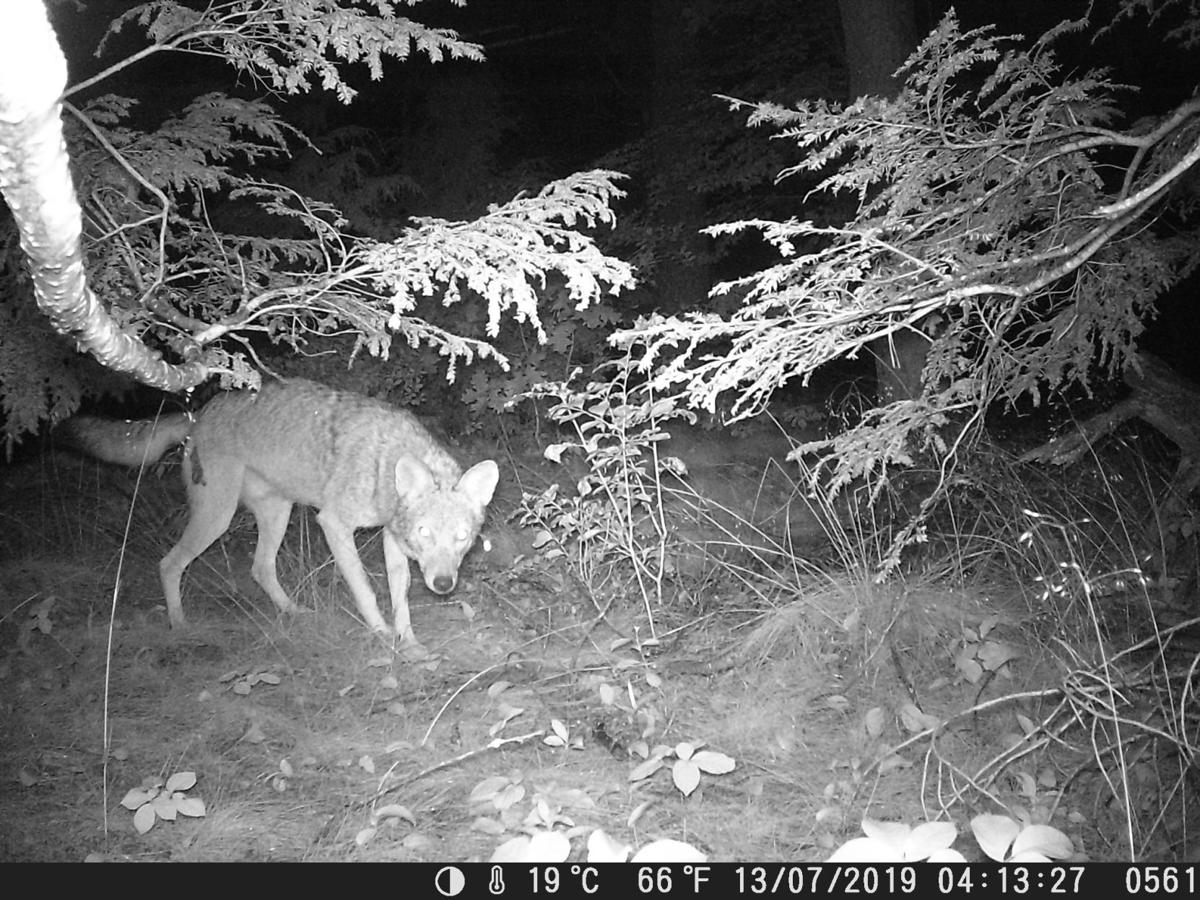 Caught on a night-time trail camera last July from back deck of house on Pine Street backing up to Powder House Reservation. 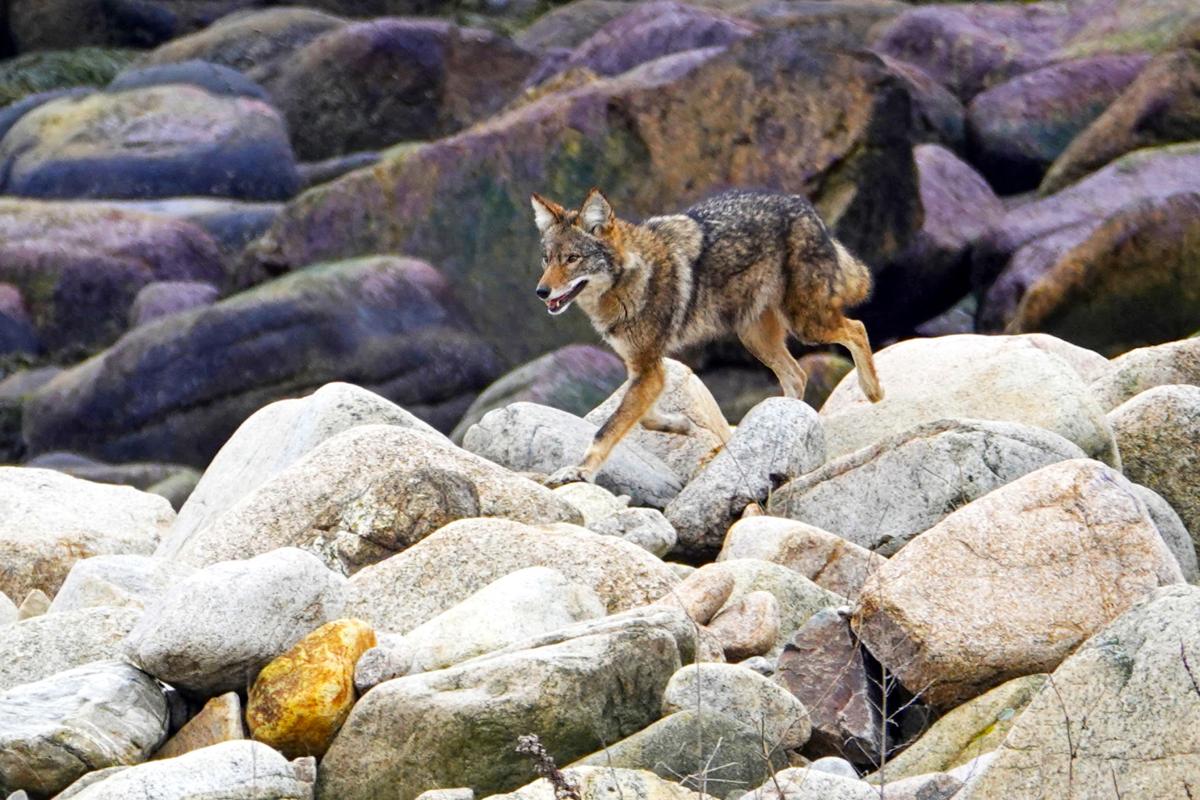 Lone coyote, possibly the alpha male of the family unit, moves across the rocks of Eastern Point last month. 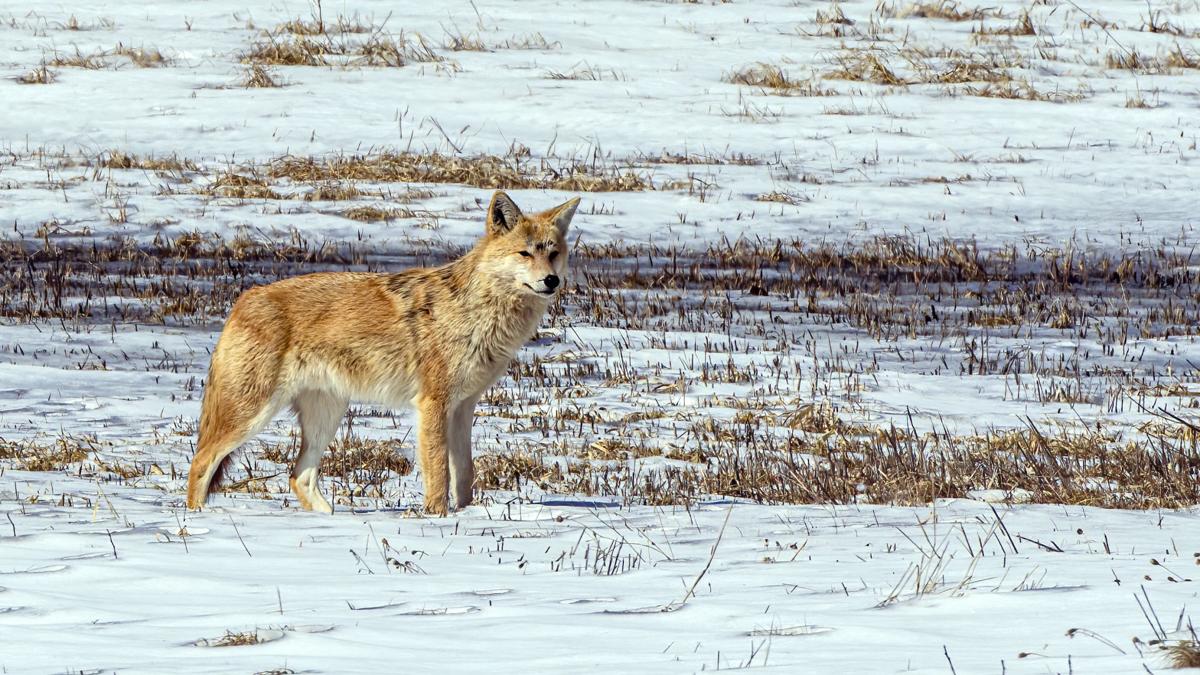 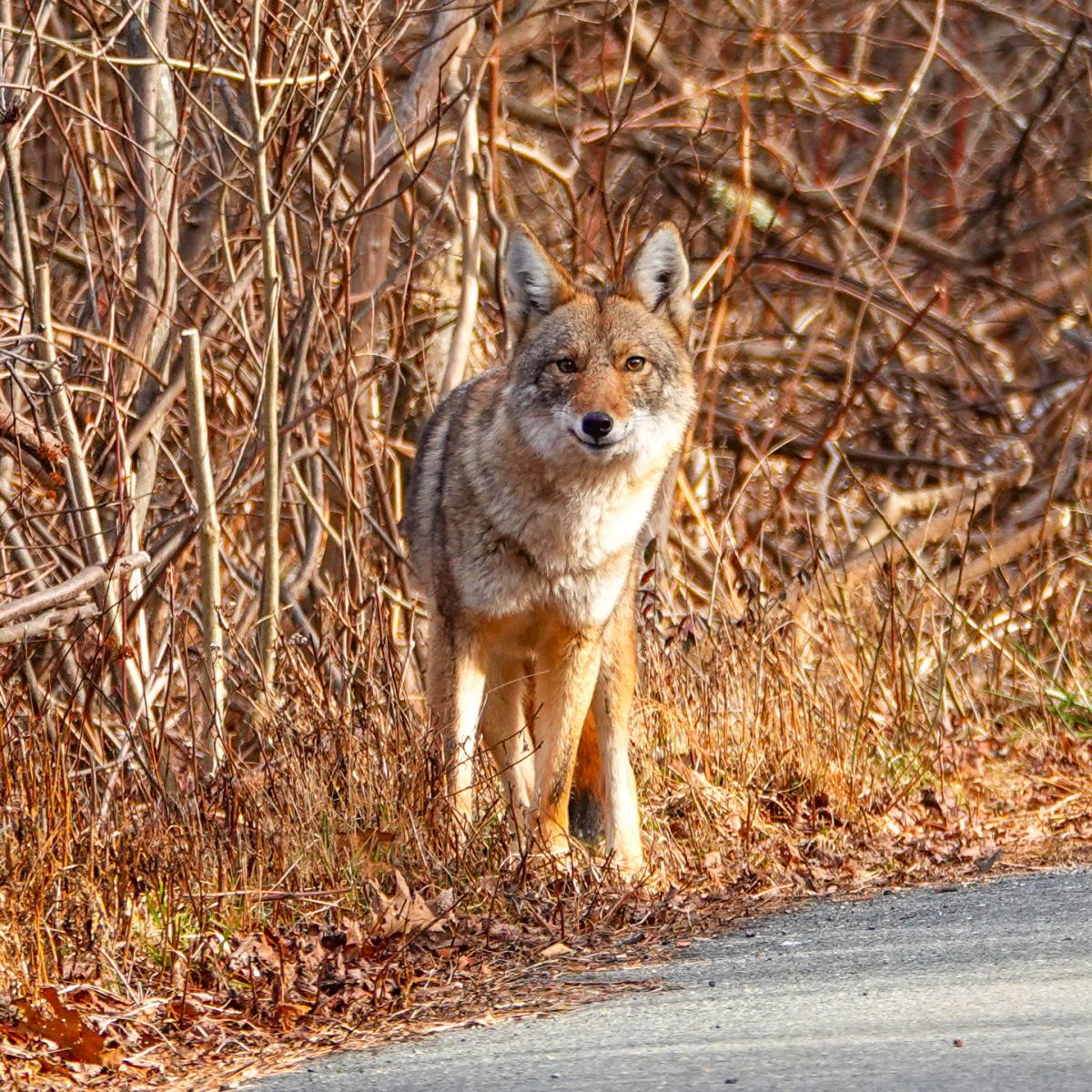 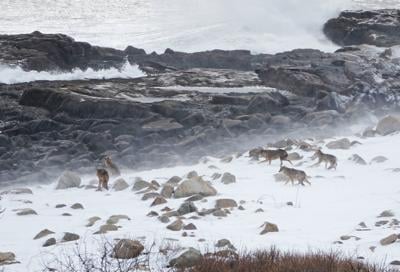 Who among us doesn’t have a good coyote story to share or hasn’t heard one from a friend or neighbor?

Megan Donovan of Bothways Farm tells how a pair of coyotes camped out in some hay bales near her home and a pen holding barnyard animals. Some mornings, as she left the house to get her two young kids off to school, the coyotes would be there, staring curiously at them. Megan didn’t want to harm them, but she knew they had to go.

Carl Jappe of Ipswich tells how a coyote used to trot alongside his neighbor’s tractor when he was tilling his fields. “The coyote recognized that the tilling would stir up and expose small mammals­–mice, voles, shrews–and provide an easy meal,” Carl said.

Rick Merullo of Essex remembers the night years ago when coyotes raided his daughter’s bunny hutch. In the morning, he found that they had somehow opened the latch and eaten all six baby bunnies but not the two adult rabbits.

Rebecca Cottingham of Manchester was getting out of her car around dusk just last month, when she saw a coyote casually loping down Desmond Ave. He stopped just a few feet away from her, so she got back into her car and then watched the coyote trot further down Desmond and cross through a yard over to Brook St.

What’s the common thread across these stories? These wild animals had become habituated to humans. And that’s a problem. The key to peaceful co-existence between coyotes and humans is to keep coyotes wild. Before examining what causes them to habituate, let’s consider how we got to the current state of coyote/human interaction on Cape Ann.

The coyote (Canis latrans) is a native North American species of the Mountain West and the Great Plains. Since the gray wolf (Canis lupus) moved into its territory about 20,000 years ago, the coyote has played second fiddle to its larger cousin. Although a predator in its own right, 20,000 years of competing and being preyed upon by wolves has left the species fast (clocked at 43 mph!), wary, and wily.

The eradication of wolves from the Eastern U.S. (except Northern Minnesota) in the early 20th century opened the door to one of the great wildlife migrations of the last century. By the 1920s, coyotes had crossed the Mississippi and have since moved into every state in the country except Hawaii. They’ve even successfully colonized big cities like Chicago, which supports an estimated population of 2,000.

The fact that coyotes have established themselves so widely is somewhat miraculous considering the efforts to exterminate the species. Dan Flores, author of New York Times Bestseller, Coyote America, reports that between 1945 and 1971 the federal government killed over 3.6 million coyotes in a largely misguided effort to protect livestock, deer, and elk. According to Project Coyote, a non-profit dedicated to "compassionate conservation and coexistence between people and wildlife,” the coyote is “the most persecuted, misunderstood, and maligned carnivore in North America.” Even today, there are approximately 500,000 killed every year—that’s one per minute.

Today, the Eastern Coyote (Canis latrans var), one of 19 recognized sub-species, is found throughout Massachusetts (even Boston), except Martha’s Vineyard and Nantucket. MassWildlife estimates a statewide population of 9,500 – 11,500. The population on Cape Ann is unknown, but they are well established here. Their diet includes rodents, birds, reptiles, amphibians, fish, insects, and even fruits and berries. Adults are typically three to four feet long (including the tail) and weigh 30 to 40 pounds. Pups are usually born in April to monogamous parents who share parenting duties.

You might have heard the term “coywolf” applied to the Eastern Coyote as DNA testing has revealed hybridization with wolves (and dogs), as follows: 60–84% coyote; 8–25% wolf, 8–11% dog. According to the work of Robert Wayne, a molecular biologist at UCLA, “Coyote hybridization with gray wolves . . . began between 550 and 950 years ago,” so it’s not just a function of their recent migration. Yes, our coyotes are about 20% larger than western coyotes, but they’re still only about half the size of wolves. There is scholarly debate about whether the Eastern Coyote is a distinct species, but Roland Kays, the head of the Biodiversity Lab at the North Carolina Museum of Natural Sciences, thinks not. He writes, “eastern coyotes are hybrids, but the ‘coywolf’ is not a thing.” He blames the media, especially social media, for hyping the coywolf label.

How concerned should we be about the presence of coyotes in our area? According to Marion Larson, Chief of Information & Education at MassWildlife, coyote attacks on people are extremely rare, with only 12 documented cases in Massachusetts since 1998. Essex Animal Control Officer Amy Reilly, agrees. “They’re not brazen creatures by nature. They’re not out to get you.” All of the experts I spoke with emphasized that people are not at risk of coyote attacks.

But the risk to pets is real. Coyotes may view cats and small dogs as potential food and larger dogs as competition. According to Amy Reilly, the most serious dog attacks in Essex have occurred when unleashed dogs pursue coyotes into the woods. Chief Todd Fitzgerald told me the Manchester Police receive coyote-related calls a couple times a month. And in 2016, the residents of Gloucester grew so concerned over coyote encounters that over 250 people attended a special town meeting on the subject.

The risk for cats is somewhat different than for dogs. In his book, “Suburban Howls: Tracking the Coyote in Eastern Massachusetts,” biologist Jonathan Way calls domestic cats “amazing predators . . . that can have a devastating effect on wildlife.” According to the American Bird Conservancy, cats kill approximately 2.4 billion birds in the U.S. every year! Cat owners need to accept that free-roaming cats become part of nature’s food chain.

There are a number of steps pet owners can take to ensure the safety of their dogs and cats. Keeping your dogs on a leash and not leaving them alone in the yard will virtually eliminate the chance of an attack.In addition, don’t feed your pets outside and avoid doing things that may attract coyotes to your home. Unsecured trash or compost, messy bird feeders that attract small critters on the ground, or open crawl spaces under porches or shedsare all invitations to coyotes to stick around.

It’s all about preventing coyotes from habituating to our way of life. Ms. Larson from MassWildlife said, “we need to help them retain their natural fear of people, to keep them wild and wary. Yell, scream, holler, throw things” if one approaches you. Amy Reilly added, “They will become habituated to humans if we allow it to happen. We need to teach people to ‘haze’ them away.” And that’s exactly what happened with the two coyotes at Bothways Farm. Megan Donovan’s neighbor understood that they needed to make the coyotes uncomfortable. What better way than firing an air horn at them each morning?! A couple of days of that, and Megan’s coyotes had left the comfort of her hay bales.

Finally, John Maguranis, the Massachusetts representative for Project Coyote offered this advice: “We’re not dealing with grizzly bears or Sasquatch. We’re not dealing with a predator who’s going to pull your children out of their beds at night and eat them in the forest. They’re just animals, and people need to learn about them. Knowledge conquers fear. And once you learn about them, it will probably change your whole perspective.”

Jim Behnke is a retired educational publisher who lives in Manchester with his wife Connie. Contact him at: jim.behnke@thecricket.com.

“We need to help them retain their natural fear of people, to keep them wild and wary.” ~ Marion Larson

Coyotes Here And There

Many pet owners worry for the safety of their beloved animals when it comes to coyotes.  But their fear is misplaced if proper safety precauti…