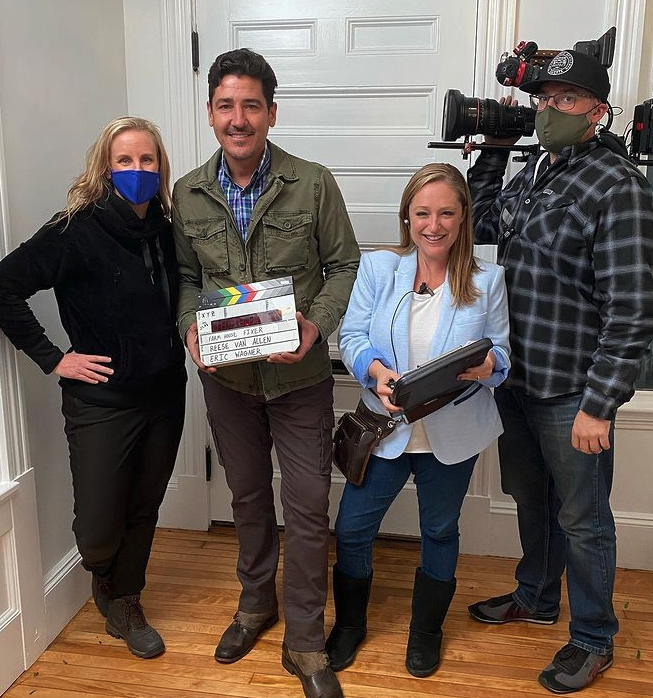 That's a wrap!  Knight and Crestin pose with members of the Farmhouse Fixer production team on the last day of shooting (for this season). 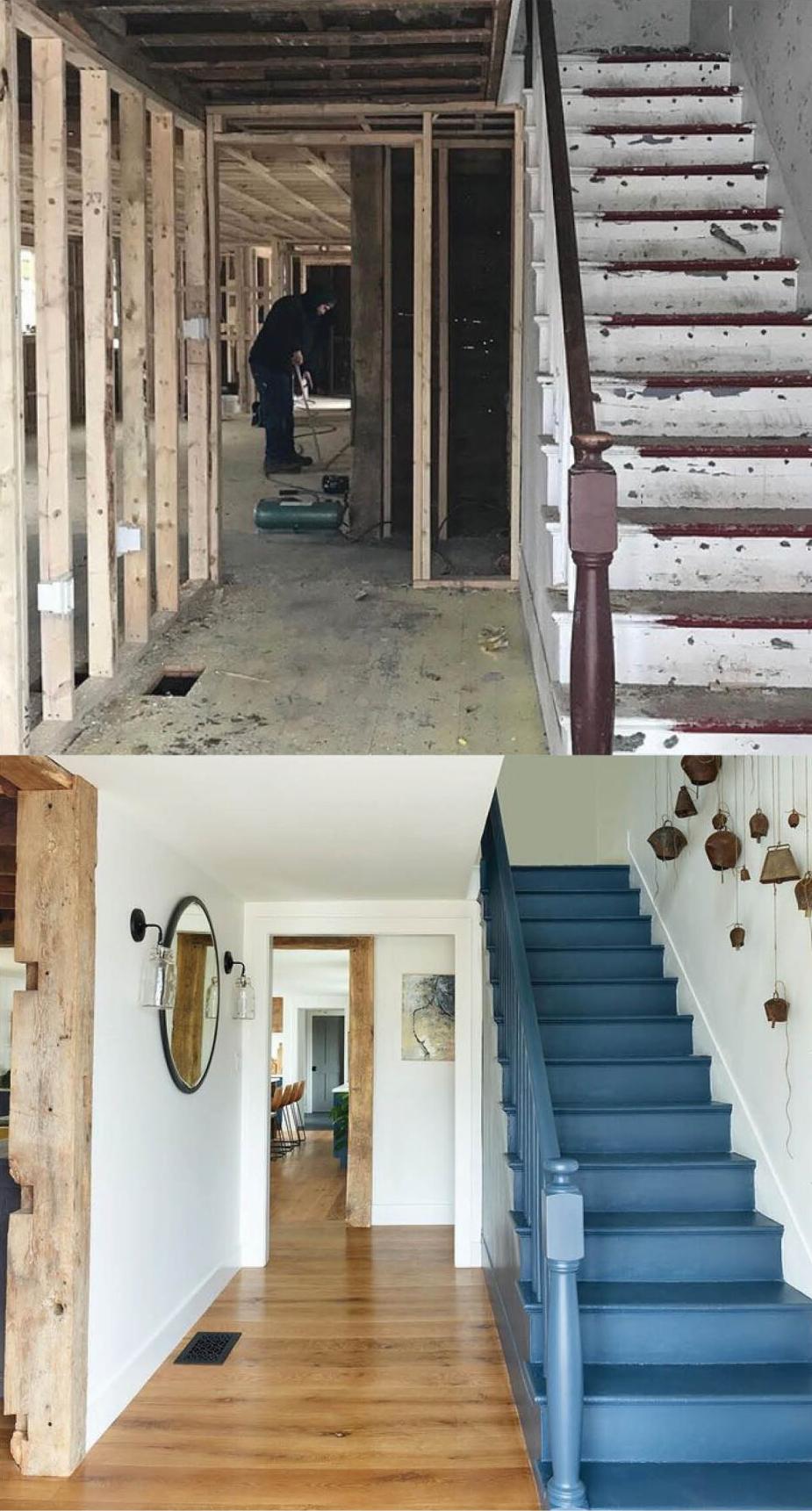 Before & After. The Beals 1770s farmhouse home in Hollis, NH was the project in the initial episode of Farmhouse Fixer on HGTV, starring Jonathan Knight and interior designer Kristina Crestin. 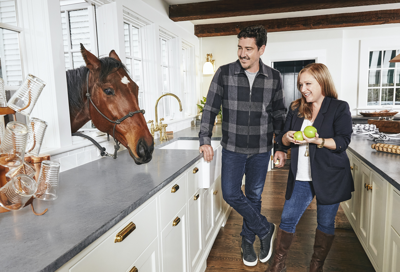 A BRAND NEW TV SHOW with a local hook is catching more than a little buzz.  Farmhouse Fixer debuted nationally March 3rd at 9 p.m. on HGTV.  The show stars Essex resident Jonathan Knight who pulls his passion for renovating New England farmhouses on to the small screen with lots of chemistry from his collaborator and friend, interior designer Kristina Crestin.

First, let’s get the back story out of the way. To many, as a singer and member of the 1980s boy band progenitor, New Kids On The Block (now known simply as, “NKOTB”), Jonathan Knight is a part of pop music history.  This alone ensures a massive audience from Millennial moms, who may be all grown up but who can still tune into their formative fandom.

The truth is, though, the Farmhouse Fixer sings all on its own, without the back story.  Knight’s the real deal.  He moved to Essex nearly 25 years ago, purchased a farm that he’s worked on ever since, keeps a low profile around town, and when he’s not on tour, spends nearly all his time nurturing a fascination of farmhouse architecture, design, and the renovation of old homes.  In two decades, he’s renovated more than 200 of them.  Watching the show, there’s no doubt: Knight loves what he’s doing, and he’s really good at it.

Farmhouse Fixer kicks off with Knight and Crestin tackling a 1700s farmhouse in Hollis, New Hampshire purchased by the Beals family.  It’s rotting, and sloping.  But it’s exactly the kind of challenge this show is made for.  Knight discovers an original stone well (with water still in it) in a dirty crawl space under the kitchen’s sagging floorboards.  Months of strategic demolition, clearing, design, and construction transforms the home into a modern farmhouse that’s perfectly set up for what families want today—open concept, lots of light, chef’s kitchen, homey traditional design mixed with just the right amount of eclecticism.

This approach is exactly what Crestin says is their strike zone.

“The key to the show is that it’s about renovation, not formal restoration,” said Crestin, “so there’s a lot of fun we can have with the projects.”

And just because it’s fun, doesn’t mean there isn’t a lot of grueling work behind the scenes.

In real life, she and Knight are friends who met professionally 15 years ago working, appropriately, on a project.  A native of Bellingham, MA, Crestin came to the North Shore to attend Endicott College and was drawn to interior design.  She then worked for a Boston area decorator and a Beverly architecture firm before starting Kristina Crestin Design 12 years ago.  Crestin’s own design aesthetic is eclectic, easily mixing design elements from a spectrum of sources, styles and time periods.  She’ll happily mix farmhouse staples with mid-century modern elements, and contemporary furnishings.  For her, it’s about what works, what wows, and what looks great.

But it’s Crestin’s high-energy personality (on Farmhouse Fixer, she’s “the firecracker”) that first gave her the opportunity to be on television.  In 2016, she was tapped by PBS to be the on-air interior designer for This Old House’s“North Shore Farmhouse” season. Around that time, Knight was in talks with production companies to launch his own show so he looked anew at his friend Kristina and the rest, as they say, is history.

On Farmhouse Fixer, the pair clearly have a full-blown chemistry as they tromp through projects, sharing renovation know-how, and meticulously modernizing centuries-old New England farmhouses that deserve a second chance.

For the show, all six of the projects featured this season are local, as in really local.  Farmhouse Fixer follows Knight and Crestin as they tackle projects in New Hampshire, Bradford, Ipswich (two actually), and, finally, one in West Gloucester.  This is largely because, unlike some other design shows, Crestin and Knight aren’t just “the talent” who parachute from job to job to read their lines and leave. These two are actually working these jobs from start to finish, addressing very real myriad challenges that come up.  Crestin said she hopes this comes across in the viewing, and the show will feel different because of it.

The West Gloucester project, for instance, took them to the old farmhouse originally tied to Marshall’s Farm Stand, off Concord Street.  The home had been owned for decades by a doctor, when a young family purchased it.  They happened to be friends of Crestin, which she said made the job harder.  A lot harder.

“These jobs (with friends) aren’t easier.  They’re harder because you want to do your very best.  You want them to be happy and love what you do,” she said.

But watching Farmhouse Fixer with Knight—whether cozying up to a favorite chicken or pulling down a rotted addition that needs replacing—and Kristina weighing in on design and sometimes getting right into it with him, it’s clear there’s friendship there, not just alignment to a craft.  Does that pose a challenge?  Nope, says Crestin, because the same rules apply.  Work hard.  Do your best.  Even more so when you’re working with a friend.

Crestin and Knight aren’t just “the talent” who parachute from job to job to read their lines and leave. These two are actually working these projects, from start to finish.

AT HOME NOW | Feats of Clay

A clay pot is often the solution when we desire a container made of classic material, is durable, reasonably priced, and available in virtually every size and style.  Clay pots have been around for a long time, and still serve us well. Some local history may be of interest.