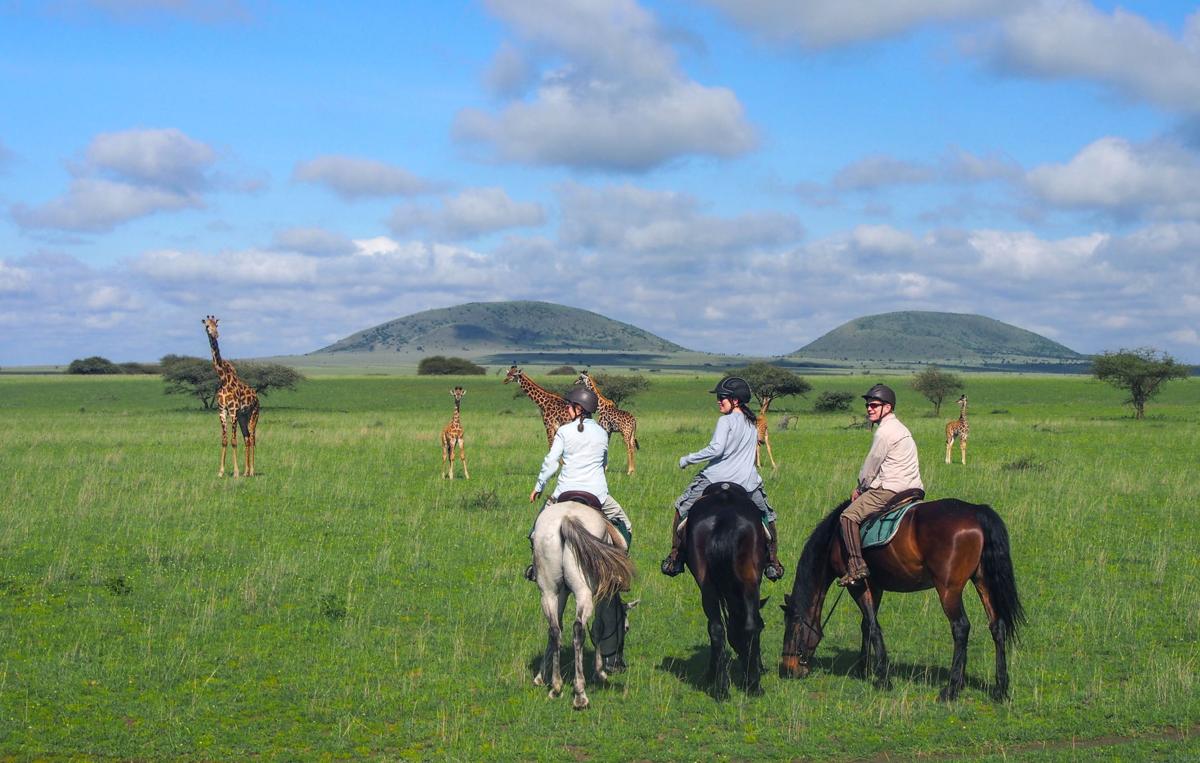 ol Donyo offers a spectacular, unique experience of enjoying safari adventures on horseback, for both beginners and very experienced riders. 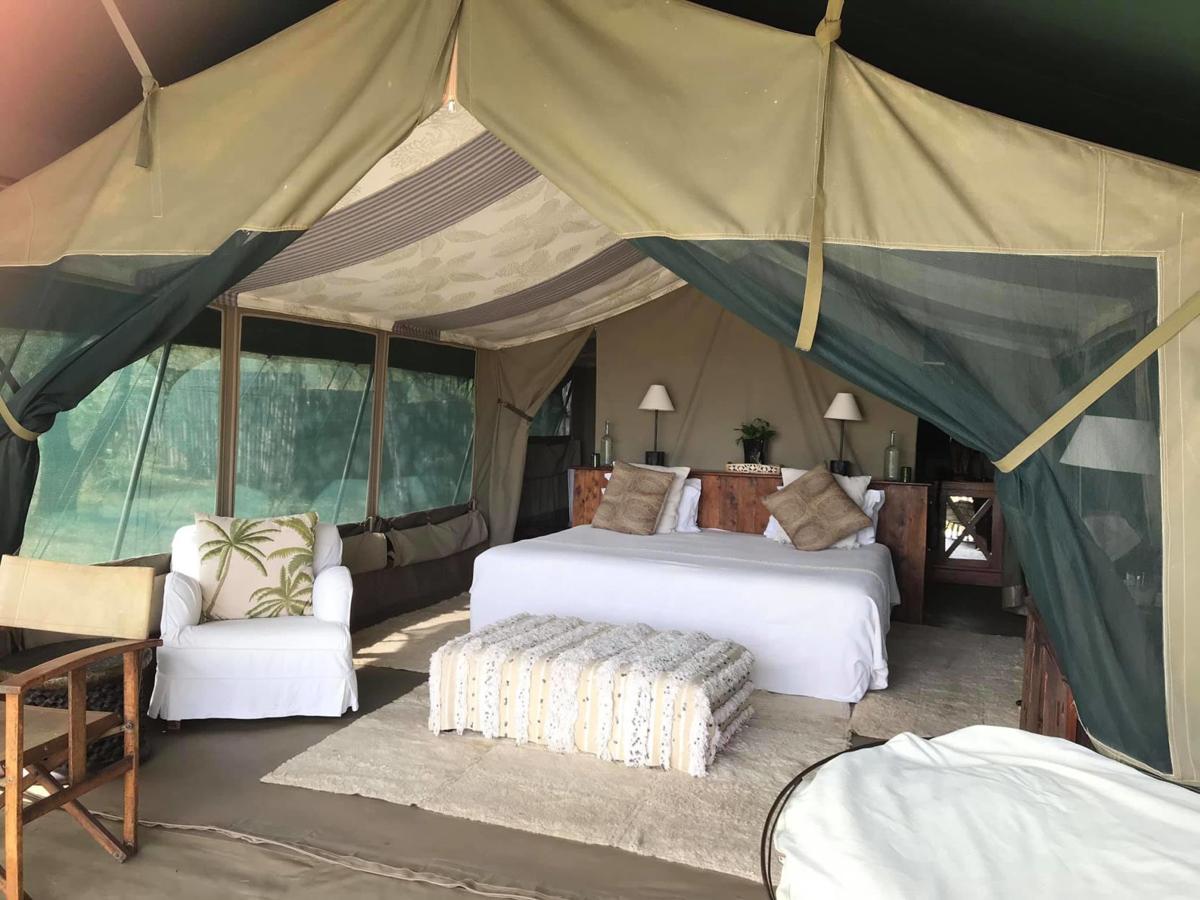 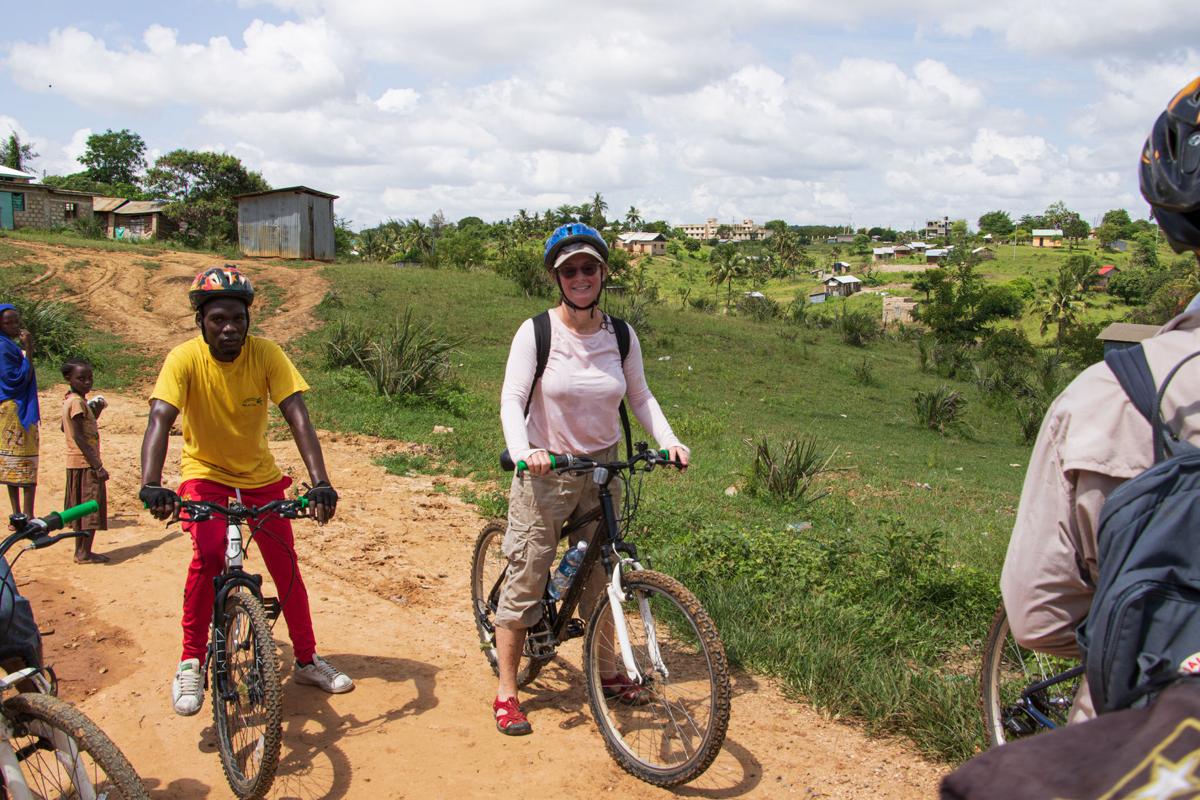 The city of Mombasa is on the east coast of Africa, hugging the tropical hills along the Indian Ocean. Intrepid young Kenyans have launched business start-ups to serve active tourists from around the world who want to try mountain biking, wind surfing, deep sea fishing, hang gliding, and many other more adventurous outdoor. 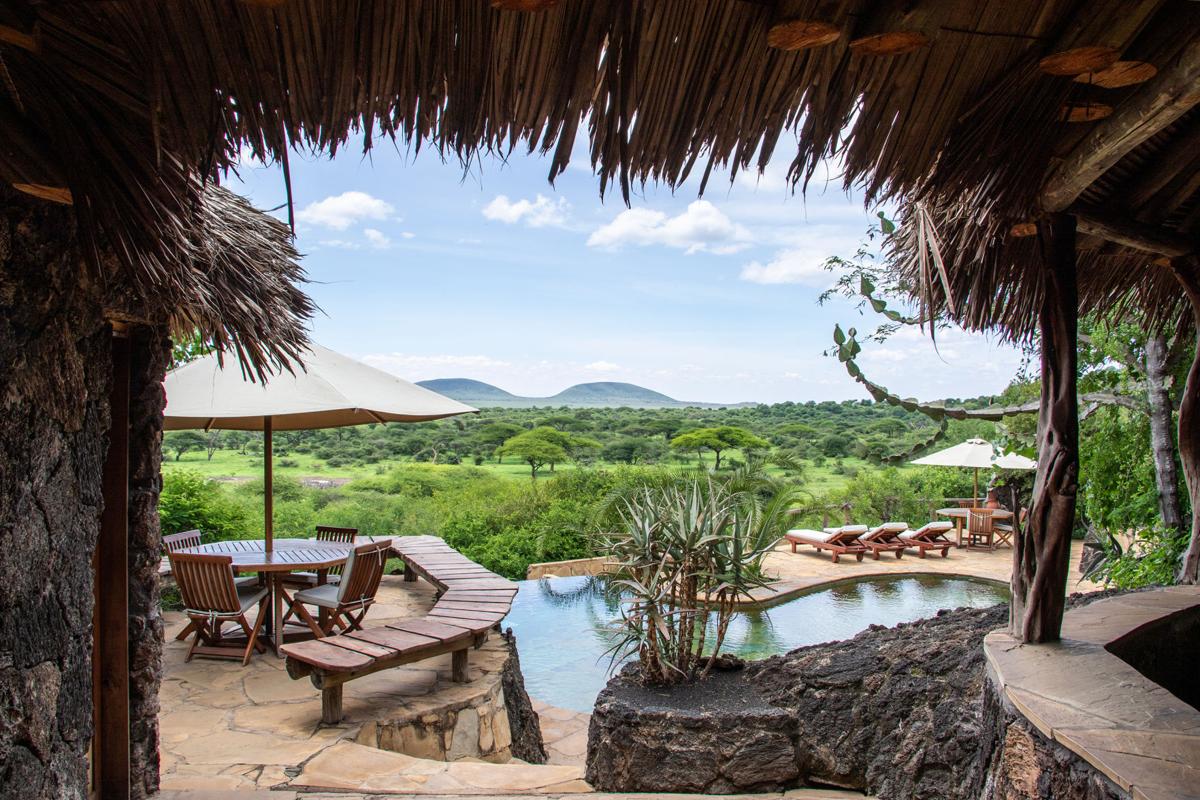 The “Family Unit” features a large shared outdoor area featuring two sitting areas, an outdoor fireplace, a heated pool, sunning areas, and an expansive view down the Chyulu Hills toward Mt Kilimanjaro. Each room in ol Donyo is specially situated to overlook Elephant watering holes giving you the chance to enjoy your morning cup of coffee while watching elephants, giraffes, and many other animals drink and bathe in their natural setting. 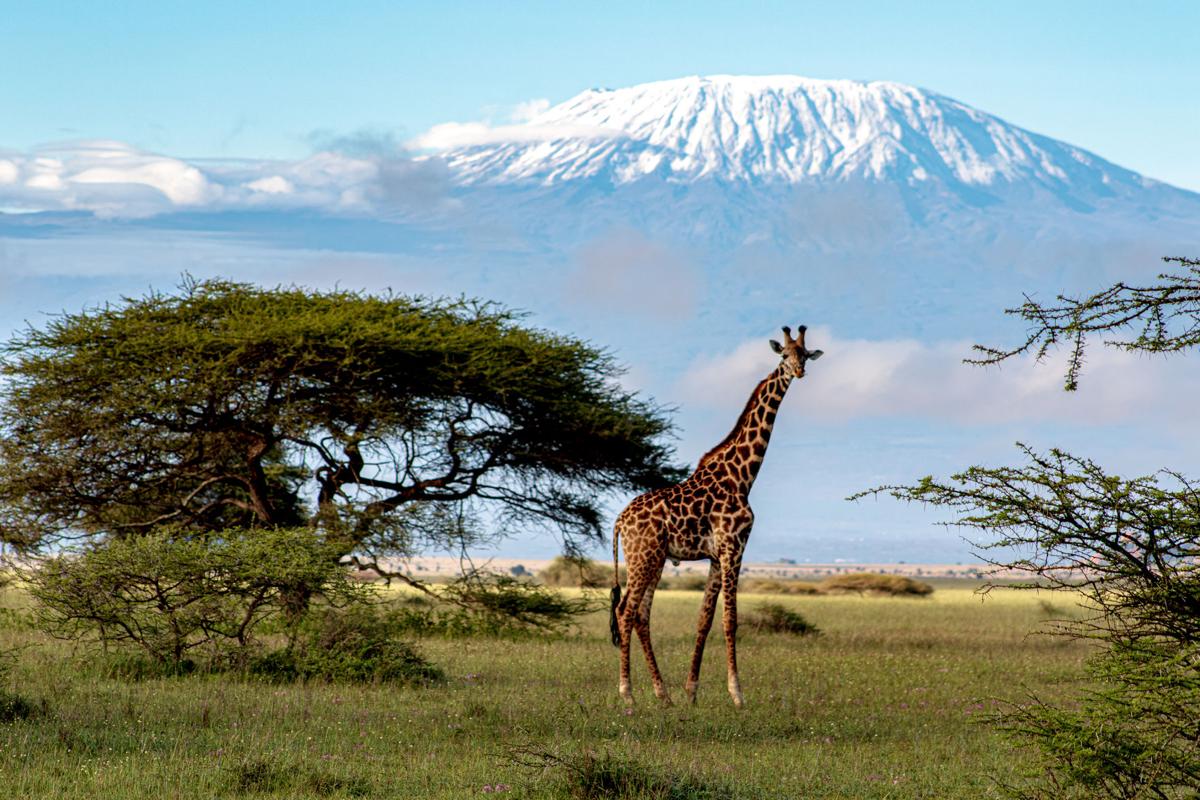 A juvenile giraffe poses nicely in front of Mount Kilimanjaro on the plains just below the beautiful Chyulu Hills of Kenya. 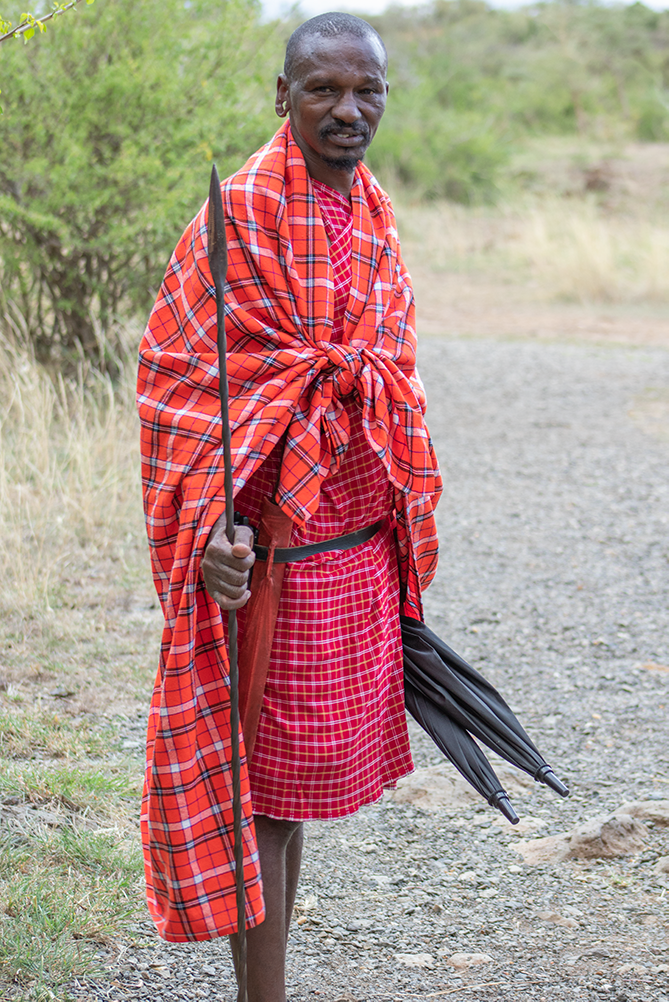 Njepat, a mild-mannered kitchen helper by day, a lion-taming Maasai tourist defender by afternoon, carries his kizu, cast iron spear, and umbrellas. He is ready for anything a walking safari in Maasai Mara North can throw at him. 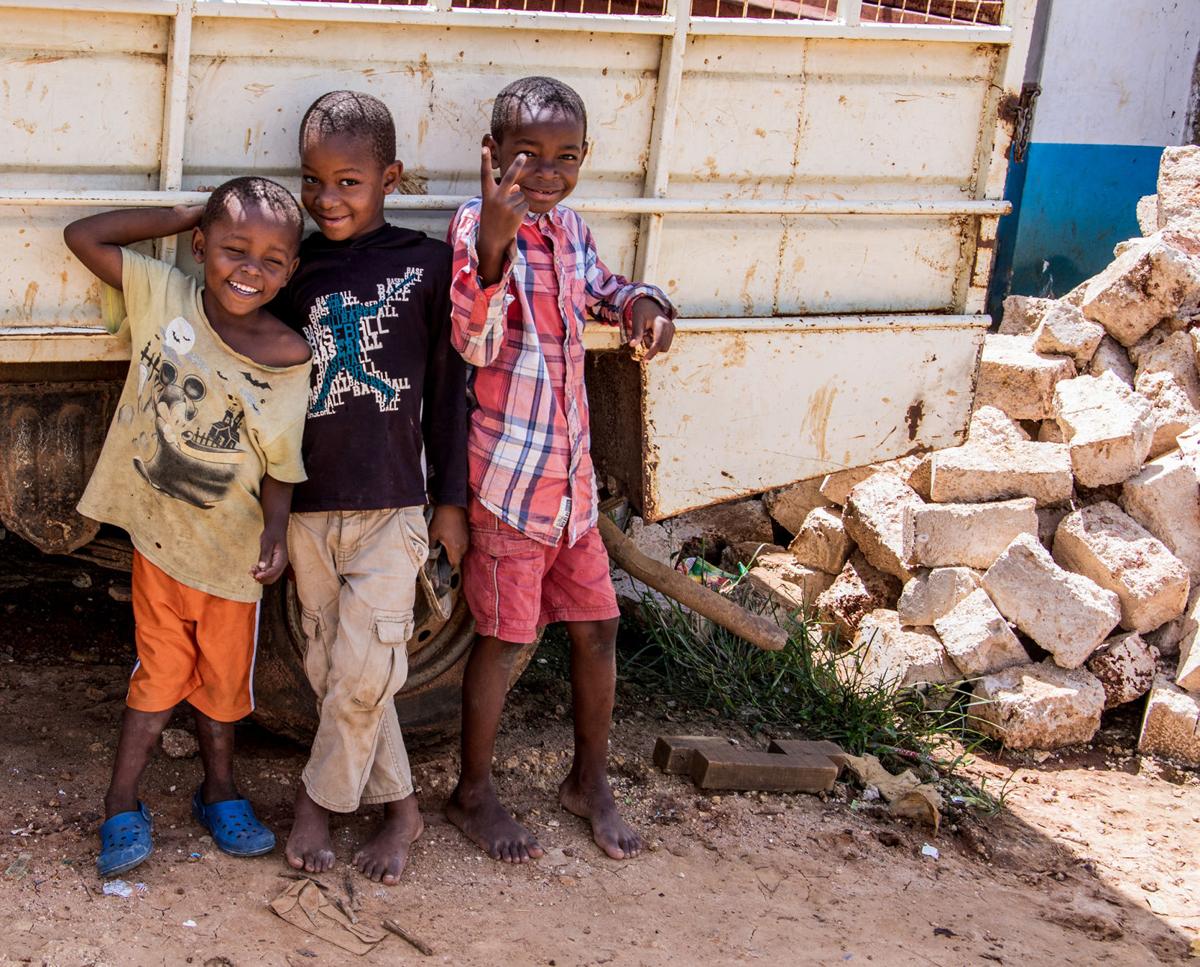 In the steamy villages around coastal Mombasa, the incredibly curious and friendly children loved having their pictures taken and seeing themselves on tourist camera monitors. 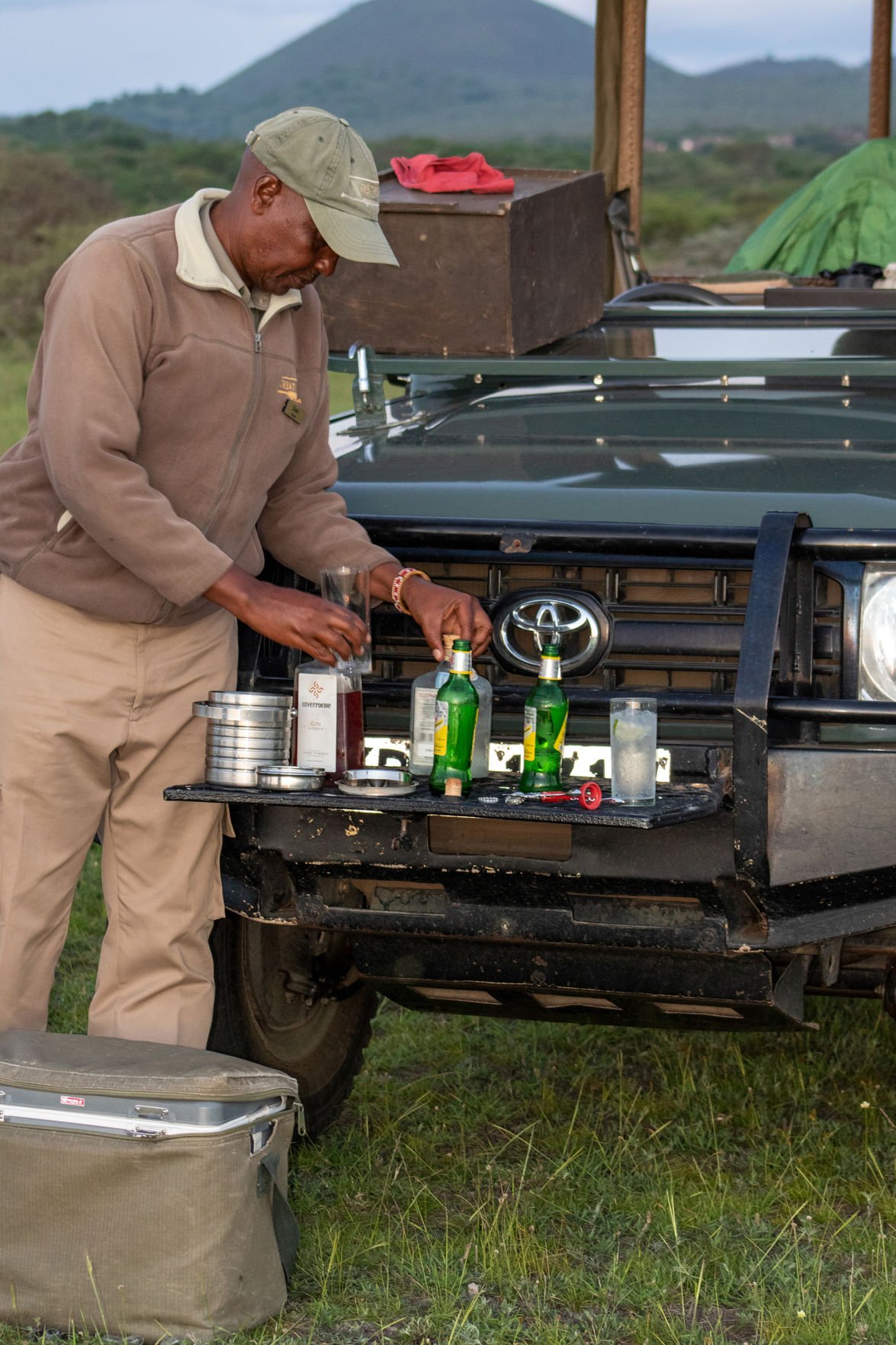 The staff of ol Donyo fully support the colonial tradition of The Sundowner at sunset of each day on safari. Winston Churchill asserted, “…The gin and tonic has saved more Englishmen’s lives, and minds, than all the doctors in the Empire.”  The tradition got its start when British colonists and soldiers used quinine to stave off malaria and other tropical diseases. The bitter pills proved difficult to swallow and were soon masked with soda water and sugar: the original tonic water, which was soon paired with gin in British India to create arguably the world’s most popular drink. 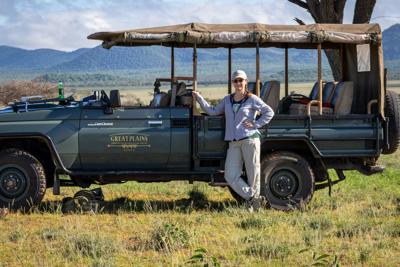 ol Donyo offers a spectacular, unique experience of enjoying safari adventures on horseback, for both beginners and very experienced riders.

The city of Mombasa is on the east coast of Africa, hugging the tropical hills along the Indian Ocean. Intrepid young Kenyans have launched business start-ups to serve active tourists from around the world who want to try mountain biking, wind surfing, deep sea fishing, hang gliding, and many other more adventurous outdoor.

In 1928 the Cricket's first editor, I.M. Marshall, started a tradition of writing letters home from his travels abroad.  They always began, “Dear folks at home," and the Slade family ran them all on the front page, where they were eagerly read by everyone in town.  This tradition was continued in the 1950s with John “Doc” Herrick and later with his grandson Charlie.  So, here, we’re kicking off “Postcards Home,” which we hope will be a regular feature written by local readers to share their interesting trips, adventures and experiences — from the faraway to those closer to home.  Our first postcard is from Christy King, The Cricket’s wonderful digital director who recently returned from two weeks in Kenya with friends.

It’s a long way from Beverly Farms to Africa, but when experienced travel friends invited me to join them on a trip to Kenya, my instant response was, “Heck yes! Count me in!” It turns out that adventuring across Kenya was far more exciting than I could have possibly imagined. The whole trip made me feel like a teenage girl triumphantly returning from the greatest first date in recorded history. #OMG!

This trip proved to be full of surprises right from the first moment in Logan airport. The gate agent sent me to the first-class security line and then to the private lounge of British Airways. Somehow, I had been treated to an upgrade to a class of service that involved fancy finger sandwiches, champagne, and a seat that laid completely flat. Clearly, I had won the airline equivalent of the lottery, which left me refreshed and ready to hit the ground running when we arrived in Kenya’s capital of Nairobi.

Our first stop was a spectacular safari lodge in a tiny slice of Kenya’s hundreds of thousands of acres of private and public conservation lands. These diverse areas are designed to protect specific wildlife species, as well as broader mandates to protect nature from general HEC (Human Encroachment Conflicts). Many of the donations from America and around the world have helped Kenyan protection efforts to stop poaching. Consistent protection has halted elephant and rhino poaching completely for the last three years in the area. These successes have revealed more complicated problems from HEC. Truly creative ideas and policy changes (Kenya outlawed plastic bags nationwide in 2017 and is slated to stop the use of all single-use plastics in 2020) are being experimented across Kenya in order to find balance between a growing population and the needs of the wildlife so core to Africa’s identity and ecosystem.

One of the newer and most beautiful safari lodges in Kenya sits within a private conservation land known as Mbirikani Group Ranch — land owned and maintained by 4,000 Maasai people. The ol Donyo Lodge is nestled in the foothills of the Chyulu Hills with expansive, heart-stopping views across 275,000 acres below the east façade of Tanzania’s Mount Kilimanjaro. Ol Donyo allows room for a maximum of 16 people per week, making every jaunt into the bush feel like you’re the only people in Africa. Our guide Seki, a Maasai tribesman and Oxford-educated biologist, told stories about the huge numbers of tourists crowding around animals on safari’s over much of Africa, and the long lines of hikers up and down the faces of Mt Kilimanjaro and Mt Kenya, drawn to see Africa’s famous animals and places. From the vantage of ol Donyo’s open-air safari vehicles and miles-wide lodge vistas, it was tough to imagine how people could possibly fill up these massive, wide open places.

As breath-taking as the views were across the plains, the interiors of ol Donyo were also wonderfully impressive. Each of the seven units were designed using local wood, stone, and natural shapes, to fit perfectly into the Chyulu Hills. Each living space is entirely unique, fitted with beautiful details gathered from Maasai culture and mixed with nineteenth-century colonial tradition. The sprawling view across the plains climbing slowly up the face of Mount Kilimanjaro was only enhanced by the elephant-sized water holes strategically positioned in front of every room. Pausing our safari exploration each evening for the ritual Sundowner nearly demands a gin and tonic out of a colonial picnic basket, if only to give our western minds a chance to absorb the extremes of scenic beauty and nature’s dangers witnessed each day across Tsavo East.

When we left ol Donyo on another small prop plane for Richard’s Camp in North Maasai Mara, I felt a little sad to think we had experienced the best of Kenya at the very beginning of our trip. As we bumped along a much dustier landscape in our open-air land cruiser toward Richard’s Camp, I was struck by the dramatic change in color — the rainy season had not yet begun here in Mara North, leaving the ground dry and hard and the grass a brutal cooked yellow.

Suddenly, we rounded a bend and came upon a spectacular scene, straight out of the "Wild Kingdom" shows of the 1970s. A pride of four female lions had taken down a huge Topi (a 200-325 pound antelope) and were currently feeding themselves, and their five cubs, about 10 feet from the side of the road. The cubs were batting each other around like a pack of teenage boys fighting for the last slice of pizza.

We eventually left the lions’ dinner table to reach Richard’s Camp situated on the edge of a ravine loved for years by a herd of hippos and large alligators. It is located just outside of the Mara North land trust, a partnership between 13 Kenyan tourism partners and over 800 Maasai landowners. Though the Maasai and camp staff were full of hope for rain, there was still enough grass and watering holes that the Mara North preserve remained chocked fat with wildlife.

Instead of permanent lodge buildings, Richard’s Camp greeted us with spacious and beautifully appointed tents replete with electric lamps, king sized beds, hot water showers, and flush toilets. The main gathering area was gorgeously appointed with beautiful furniture, numerous books about the area, a bartender who could whip up any cocktail, and an unbelievable series of meals from Chef Josphat’s rudimentary kitchen that handily challenges a fancy restaurant’s panache. In fact, the chef’s version of lamb with mint sauce was the very best I’ve ever eaten anywhere in the world.

As a runner, the toughest part of safari travel for me turned out to be the many hours sitting in safari vehicles, planes, lodges, and camps. Safaris can be described as large zoos, except that people are the ones protected in vehicles, behind fences and guards, while gigantic animals are free to roam wherever they please. In one camp the guides offered to take visitors on short walks or runs, and I took full advantage, but I quickly learned to carefully listen to my guides and stay alert at all times. We accidentally surprised a fully-grown water buffalo on one walk, which quickly turned into a very fast run to the nearest cover!

The single most surprising element of Africa is the sheer scale of physical space. Seeing giraffes, elephants, and rhinos, walking around the forests and plains of Kenya is nothing like seeing animals in a traditional zoo. I have seen plenty of these beasts in that way, always feeling sorry for huge creatures stuck in spaces that just seemed wrong somehow. Seeing those same animals in Africa makes all the sense in the world. The sheer scale of Africa makes elephants and giraffes wandering around the plains look about as remarkable as a husky or hound running around in a field in America. The scale is just right.

The people of Kenya were incredibly welcoming. We hung out with a local family in Nairobi, Maasai women living in traditional tribal huts, and shopkeepers in Mombasa. Each and every person was genuinely glad to see us, answer our questions, and help us experience their country fully.

When I returned to Beverly Farms and started sharing pictures with family and friends over the Christmas holidays, I came to realize I had captured far more of the magic and wild beauty of Kenya than I expected. Not only did this trip rekindle my lifelong love of photography, but it continues to pay dividends as I get to share these images with my neighbors and re-tell the stories that go with them. I cannot wait to go on another date with Africa, just as soon as I possibly can.

The Beverly Farms Library is hosting a showing a collection of Christy’s pictures from Kenya during the month of February. The public is welcome and free of charge.