$36.00 for 365 days
Get Started
You are the owner of this article.
Edit Article Add New Article
You have permission to edit this article.
Edit
Home
SUBSCRIPTIONS
News
Opinion
Out and About
Homes
Experts
Obituaries
Calendar
Classifieds
Share This
1 of 3 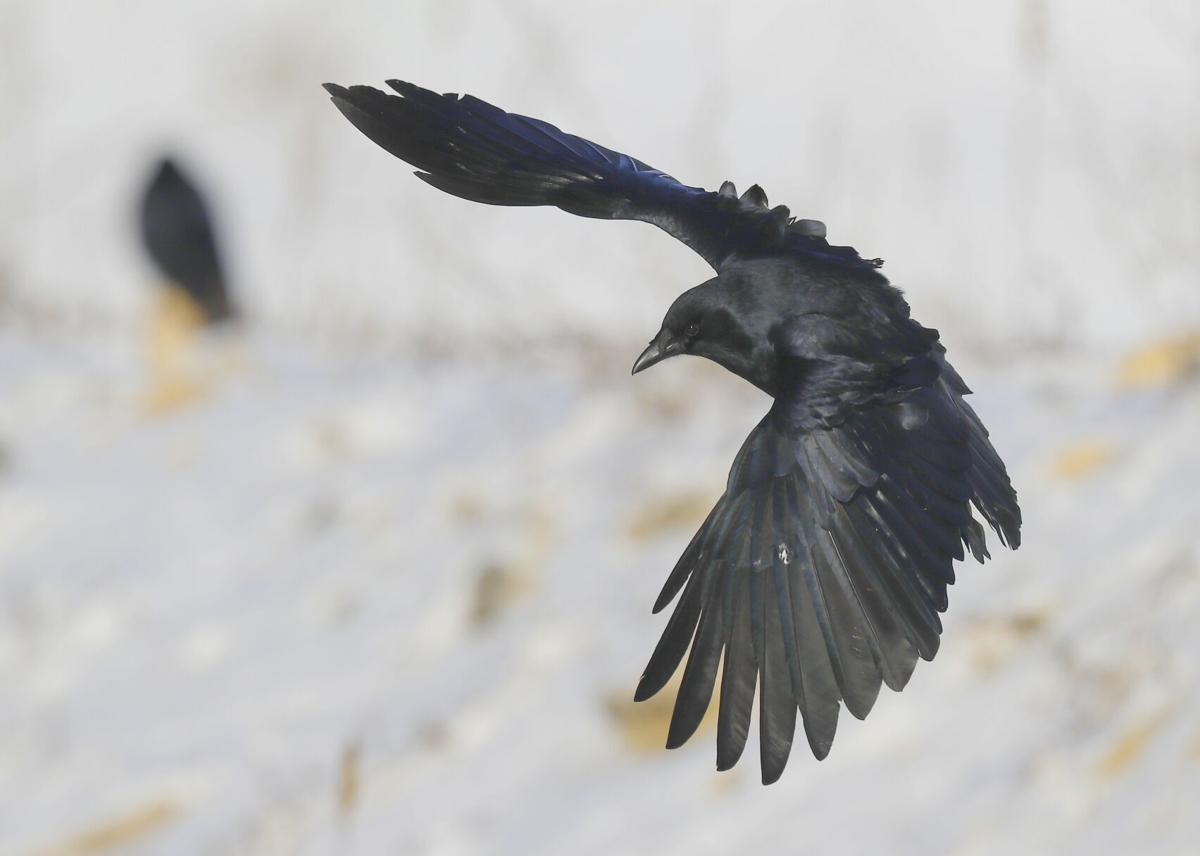 Common crow in flight and preparing to land around the north end of the O’Leary Bridge near the Great Stone Dam in Lawrence.  Each winter as many as 25,000 crows flock to Lawrence.  Craig Gibson, wildlife photographer and one of the leaders of the Winter Crow Roost Project, has published articles, sponsored art exhibits, and led photography workshops on the Lawrence flocking phenomenon. (Courtesy of Craig Gibson) 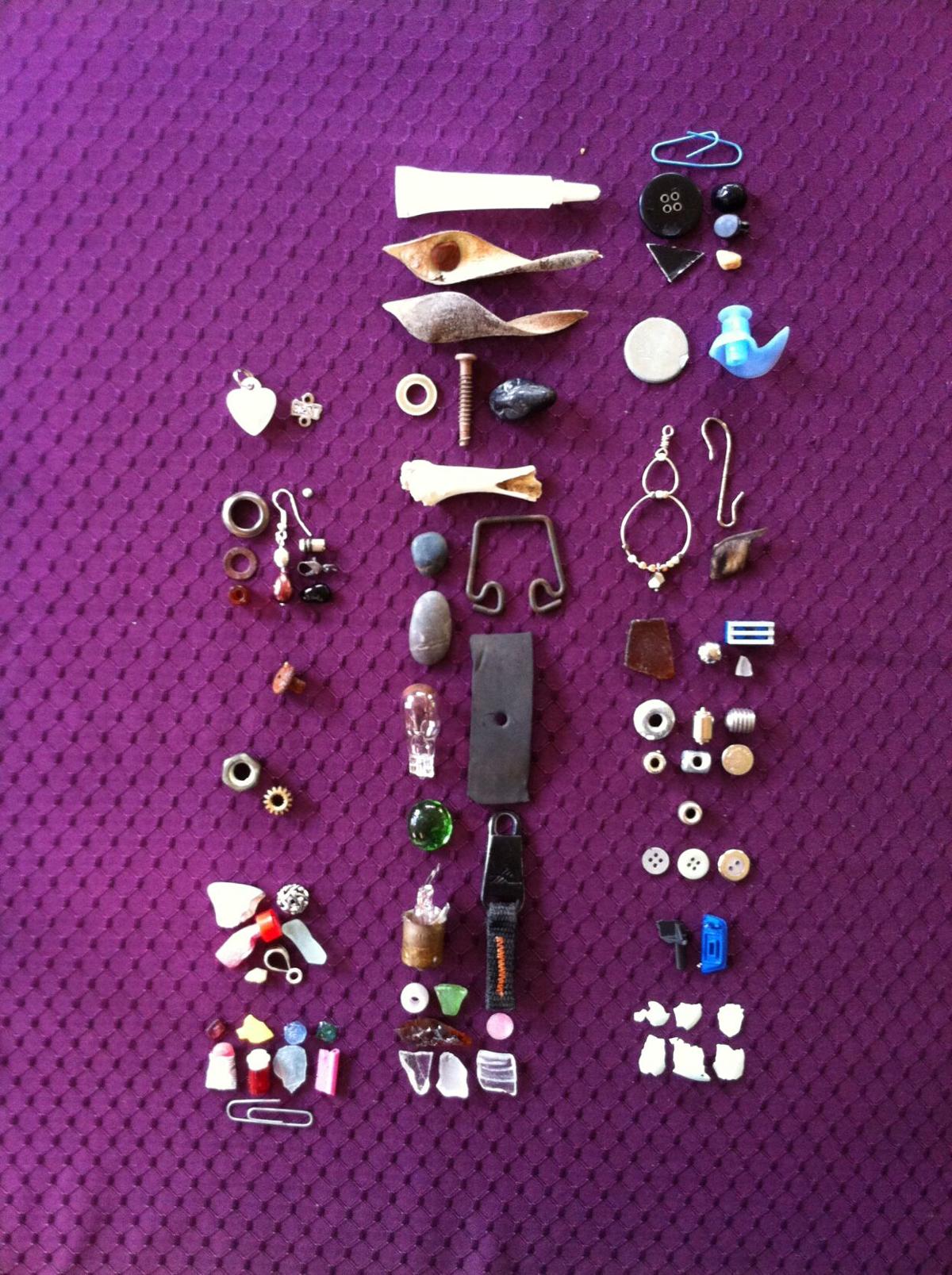 This photo of a selection of Gabi Mann’s “gifts” was provided by Katy Sewall, a Seattle-based writer and creator of “The Bittersweet Life,” who broke the story about Gabi and her crows in 2015. You can access the podcast about Gabi’s gifts here. 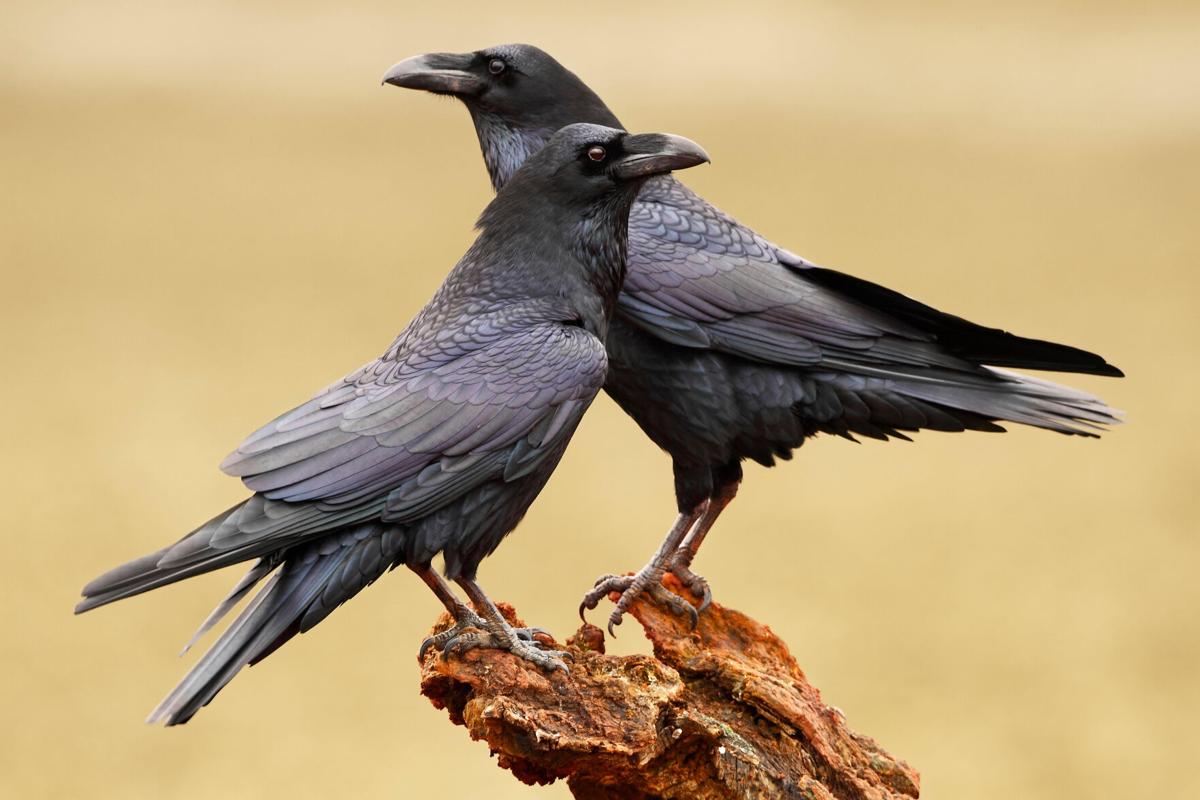 Mated pair of ravens.  Bernd Heinrich, award-winning author and professor emeritus of biology at the University of Vermont, calls ravens “the grandest of all corvids.” (Photo with permission, Alamy Images) 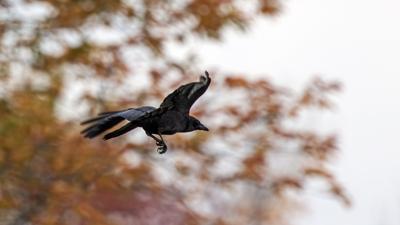 AT ANY GIVEN MOMENT, if you stop where you are, there is likely something unexpected within your view.  If you are lucky, it is something that will delight you.  Yet, more often than not, as we busily hustle along our usual path, we forget to see what was there all along, waiting patiently for us to notice.

We tend not to see crows.  Perhaps because of their ubiquity.  Perhaps because we find them ordinary.  But this is a grave mistake, for the crow (and the raven) are creatures not only steeped in rich and mystical lore but are also in possession of a complexity and intelligence that is utterly remarkable.  Furthermore, even if we do not see them — they certainly see us.

In legend, the raven is often presented as a psychopomp, a guide connecting the spirit world to the material world.  Ravens are most commonly portrayed as shepherds of the dead. Being carrion birds, these notions around them tend to be dark and somewhat nefarious.  In Swedish folklore, the raven represents the ghosts of those who have been murdered without a Christian burial.  In German tales, they represent the soul of the damned.  Edgar Allan Poe spared the raven little, describing his as a “grim, ungainly, ghastly, gaunt and ominous bird of yore.”  And so, it is no wonder that at this time of year we find the raven gazing out at us from many a Halloween display.

However, other cultures have an alternate view.  The indigenous people of the Pacific Northwest have mythologies that celebrate the role of the raven as creator of the world.  In the Viking age, the god Odin is often depicted with a raven on each shoulder.  Named Huginn and Muninn, these birds are sent out each day to travel the whole world and bring back crucial messages.  In native American symbolism, the crow represents wisdom. And, of course, there’s the familiar story of the Tower of London with its superstition that the Kingdom of England will fall if its ravens are removed.

But what of real ravens and crows?  The ones we see (or do not) every day? As it turns out, they are the most marvelous of creatures.  Crows play games: drop-and-catch, tug-o-war, and king of the castle.  They are generous.  Upon finding food, they will call to others to assemble and share before eating, they assist one another, and they mourn their dead.  And perhaps most marvelous of all — they bring gifts.

In 2011, Gabi Mann was four.  As with most four-year-olds, Gabi dropped bits of food here and there as she came and went from her home in Seattle.  The crows noticed and dropped down from the trees to gather the lost food.  Soon Gabi and her brother fed the crows, intentionally, from their school lunches.  By 2013 Gabi and her family had established a ritual of feeding the crows daily.  But another ritual had also begun — gifting.  Once they had cleared the food, the crows would leave small trinkets:  an earring, a button, a bead, or maybe a polished rock.  Gabi’s collection grew and grew, resulting in a vast collection that continues to this day.

In San Francisco, Melina Green began feeding the handful of crows that visited her fire escape.  Just like with Gabi, the crows began to bring gifts:  the crumpled foil from a champagne bottle, small bones, colorful rocks, shells, and even a gummy bear.

Stuart Dahlquist had been feeding a family of crows in his Seattle yard for four years before they brought him a remarkable gift: a pine sprig with a soda tab threaded onto it.  Hard to believe?  The following day another sprig, adorned in precisely the same manner, arrived in the same spot.  Stories of gifting crows exist all across the world.

Crows and ravens are members of a family of birds known as corvids, which also includes jays and magpies. There are over 120 species around the world.  Locally, our most common corvids are the American crow (Corvus brachyrhynchos) and the blue jay.  The common raven (Corvus corax) is a relatively rare visitor to Cape Ann, but Robert Buchsbaum, Conservation Scientist for Mass Audubon for 34 years and compiler of the annual Cape Ann Christmas Count, tells us ravens are seen on a regular, if infrequent, basis here.  Four were recorded in the 2019 count, but there’s only one documented instance of a nesting pair of ravens on Cape Ann.  That occurred in 2004 in Manchester on land protected by the Manchester Essex Conservation Trust.

Superficially, ravens and crows seem a lot alike.  Both are omnivores but there is more meat in their diets than you might imagine, mostly roadkill and carrion.  But ravens are almost twice the size of crows with a wingspan greater than that of a red-tailed hawk.  Both species have a wide range of vocalizations—including mimicking human speech—that evolves over their lifetimes.  Neither species is migratory, although they cover great distances regionally.  Both species are monogamous, but crows form and retain large, cooperative family groups that stay together for years and sometimes join with other families to form large flocks in the winter months.  In fact, tens of thousands of crows roost in Lawrence each winter.  Ravens, in contrast, don’t generally retain enduring social bonds with their progeny once fledged.  And, whereas crows are more comfortable in populated areas, ravens prefer the more remote boreal forests and mountainous regions of the north and west.

All corvids are distinguished by their intelligence and problem-solving ability.  If you have any doubts about that, search “crow problem solving” on YouTube and you will be treated to a video of a crow solving an 8-part problem, including learning from trial and error and creative use of tools.

So, what makes them so smart?  Much of what we know about this question is based on the research of Dr. John Marzluff of the University of Washington, Dr. Bernd Heinrich of the University of Vermont, and others.  Corvids have the biggest brain-to-body ratio of any birds save a few species of parrot.  The human brain comprises 1.9 percent of our total body weight. The brains of ravens account for 1.4 percent of their body weight, and there is one species of crow whose brain is measured at 2.7 percent!  They also have rather long lifespans.  Crows can live up to 20 years, ravens even longer, and they are lifelong learners.  They need to be quite ingenious to access different food sources that may be available only episodically.  For example, on Puget Sound in Washington, crows have learned how to harvest clams at low tide and drop them in front of cars disembarking from ferry boats.  After the car wheels crush the clams, the crows swoop down to partake of the feast.  This behavior shows a remarkable degree of cooperation, planning, and understanding of delayed reward.

Crows and ravens possess what psychologists call the “theory of mind,” the ability to infer what other individuals—animal and human—are thinking or intending to do.  Theory of mind is a gateway to a wide range of behaviors, including playfulness and mischief making.  For example, ravens have been observed flying upside down, sliding on snow, and stealing windshield wipers from cars.  And then there’s the gifting behavior of crows.  Dr. Marzluff has stated that “leaving gifts suggest that crows understand the benefit of reciprocating past acts that have benefited them and also that they anticipate future reward.”

Lisa Mann, Gabi’s mother, told a remarkable story at the end of an interview she in gave 2015.  While photographing a bald eagle in her yard, Lisa dropped the lens cap to her camera.  The next morning, she found it carefully placed on the side of the bird bath.  The Manns had been using video cameras to record the crows since the gifting had become more regular, so Lisa looked at the surveillance footage.  In it she saw one of the crows carefully pick up the lens cap, and then spend a great deal of time washing it in the birdbath before carefully placing it on the side.  A gift of kindness.

So, this Halloween, as ominous depictions of inky ravens and crows abound, take a deeper look.  Know that they are marvelous, intricate, and highly intelligent creatures.  Know also that they are capable of complex and thoughtful relationships with each other, and with us.

And, most of all, remember to look around for something you may have missed — something wonderfully unexpected.

Crows: Anything But Common

This Halloween, as ominous depictions of inky ravens and crows abound, take a deeper look.  Know that they are marvelous, intricate, and highly intelligent creatures.

The Murmurations Of Starlings

This week our nature writer Jim Behnke addresses starlings, a bird with a complicated back story.  Starlings are beautiful, and dramatic.  They are also considered an invasive species by serious birders.