$36.00 for 365 days
Get Started
You have permission to edit this article.
Edit
Home
SUBSCRIPTIONS
News
Opinion
Out and About
Homes
Experts
Obituaries
Calendar
Classifieds
Share This 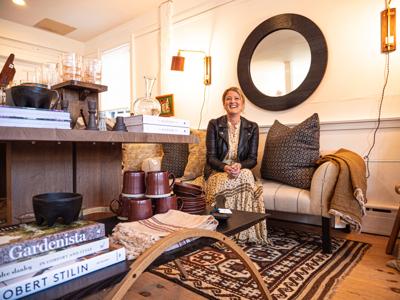 Seasonal Design Advice From Someone Who Knows

The motto of designer Stacey Clarimundo, founder of one of Essex’s fresh new shops is “fewer, better things.” Her small but uncluttered shop and design studio, which opened in 2018, is filled with tons of decorations for the home, including tabletop items, glassware, candles, lamps, as well as soft goods that ooze texture — accent pillows, pile rugs, linens, throws and more.  Clarimundo says most items are local, and all are made by artisans.

Found (not to be confused with “Found Objects,” the home décor store that operated in Manchester until last year when it moved to Lynnfield) is a special place.  If anything, the store is a quick and easy way to purchase items that are in Clarimundo’s professional zone as a busy interior designer.  Walking through the store, one sees it’s neither modern, nor traditional — its self-described aesthetic is “somewhere in between,” she explained.  Think a relaxed, high-end, coastal year-round vibe.  And lots of texture, lots of layers, from linen to cotton to wool.  Found features high-end brands like De JONG & Co, Libeco, Medina, Morrow, Victoria Morris, among others.  They’re special and they’ll last forever because, according to Clarimundo, hand-made things that are well made last.  And they don’t go out of style. As a result, Found feels more like a design showroom come to life.  Stacey Clarimundo created her first company, Davis Scott, in 2014 before independently launching on her own last year.  Her design projects have ranged from a 28,000-square foot, ground-up residential construction and full-gut renovations to small, one-room projects.

At Found, visitors will see there isn’t a clear seasonal line.  She designs for clients who are drawn to fabrics with texture and who think in terms of the weight of a fabric rather than the look of a particular season.  For example, Clarimundo pointed out a large, 70 percent linen/30 percent wool throw from Belgian linen company Libeco called the “Foundry Throw,” which may look like summer but its weight — a substantial seven pounds — puts it squarely in fall and winter seasons.  Clarimundo said clients may purchase the Foundry Throw for the colder seasons, but that doesn’t mean they won’t use it, and enjoy it, all year long.

Stacey Clarimundo, an interior design professional, opened her studio-slash-store in Essex in 2018.  It's a quick and easy way to purchase ite…