$36.00 for 365 days
Get Started
You are the owner of this article.
Edit Article Add New Article
You have permission to edit this article.
Edit
Home
SUBSCRIPTIONS
News
Out & About
Living
Opinion
Local Events
Obituaries
Long Ago
Marketplace
Share This
1 of 3 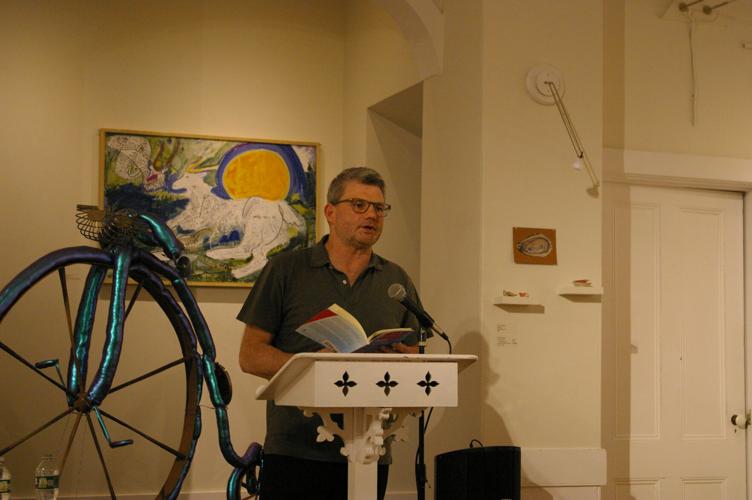 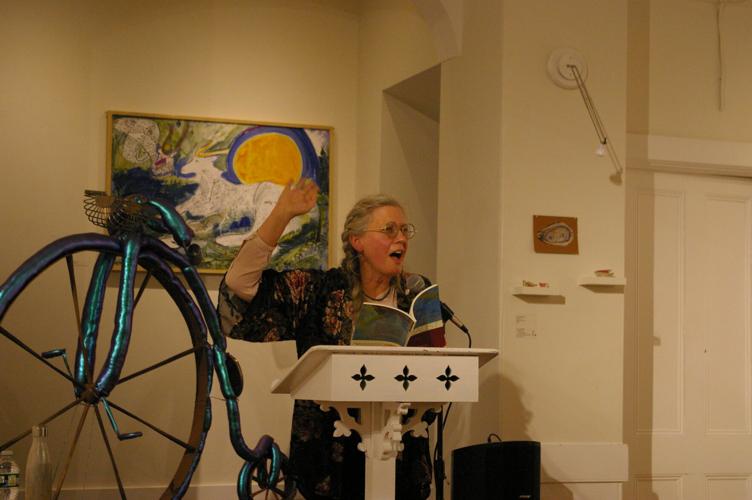 When the Rocky Neck Cultural Center opened its doors for a Gloucester Writers Center poetry reading May 19, a dormant component of Cape Ann’s creative culture was revitalized.

Live readings are back, with healthy attendance.  Cape Ann residents poured into the venue at 7:30 p.m. to hear Boston poets Mary Buchinger and Kevin Gallagher read poems from their respective collections.

The Gloucester Writers center hosted their last live reading in March, 2020, just before the COVID-19 pandemic shut down live events.  The organization switched all readings to Zoom, a temporary substitute for physical closeness and creative community.

The Gloucester Writers Center’s first live reading post-pandemic evoked an enthusiastic closeness; attendees caught up on one another’s lives between gallery walls.  Framed art and sculptures presided over the evening.  Outside, a gray day had turned into a peaceful dusk.

When Gallagher took the stage to read, he delivered detail.

Currently a professor of Global Development Policy at Boston University, a broad worldview informs Gallagher’s writing.  His poems are rich with the texture of local and Irish history. Gallagher said he is inspired by his own family history, which has roots in Ireland, England, and Italy.

He first read poetry from his new book “The Wild Goose.”  Even the name of the book, he explained, was pulled from history.  “The Wild Goose” was the title of a literary magazine edited by Irish poet John Boyle O’Reilly on a ship from London to Australia, where he and many Irishmen were taken for penal servitude in the nineteenth century.  For Gallagher, the title embodies the spirit of “never looking back.”

“I just love the whole process of when history can talk to us today ... [and] my journey of discovering it, [going] into libraries and into archives and finding people’s voices,” he said, “and to bring it back and add lyricism to it and tell stories about the past that also talk a lot about today.”

Gallagher read a poem called “Home Run,” which broke from the theme of Irish history but perhaps described a closer, more magnified version of that history; the subject of the poem is Gallagher’s own late father.

Propelled by grief and nostalgia, “Home Run” distills the relationship between Gallagher and his father down to just the most poignant images.  The poem’s authentic specificity is evocative of writers like George Saunders who have a knack for stinging precision.

Gallagher also read a poem called “The Valhalla” about a Gloucester swordfish boat, which had mob ties to Boston in the 1980s.  He followed it with another Gloucester-inspired poem, which featured dialogue that he read in a thick New England accent, earning chuckles from the audience.

Both poets read work inspired by Gloucester, Cape Ann, or the ocean, to the delight of the local audience.

Buchinger’s work was heavily nautical, inspired by setting and nature.  She said she draws her inspiration from the natural world and from her dreams.

Buchinger, the president of the New England Poetry Club, had a quiet and commanding presence at the podium.  Her words were musical, and at times, the sounds spoke for themselves: the whistling of tongue against teeth, the sharpness of consonants, the roundness of vowels.

The complexity of Sanger’s character, history, and beliefs inspired Buchinger to write a poem with alternating perspectives between Sanger and her grandson Alexander Sanger, who currently serves as chair of Planned Parenthood.  The poem examines Margaret Sanger's core beliefs, how they affected her familial relationships, and how they ultimately impacted her legacy.

“Poetry can be a really powerful tool,” Buchinger said.  “It can move people to think about things.  Margaret Sanger was really complicated, but she obviously did a lot of really good things.”

Buchinger, like Gallagher, has grappled with the grief of losing her father. In a delicate, introspective poem, she contemplates life and death while looking out at the ocean.  Vibrant images of stones, water, tidepools, sandbars, and waves subtly bring cathartic release to the listener or reader.  Buchinger’s poetry feels like hyperawareness, hyper-connectedness — like humans and tidepools breathe together in the world, made of the same stuff.

“At my feet, I find a smooth, flat rock that fits exactly in my palm,” she read.  “It’s the shape and heft of grief.”

The audience nodded and murmured after particularly touching stanzas.  This reaction — this creative call-and-response motion — is unique to the in-person setting, a connection that can be lost over Zoom.  The beauty of a poetry reading lies in the ability to share a communal feeling — real-time, real-place — and sit together, awash with the same emotion.  The Gloucester Writers Center has found that beauty again.

Manchester was a town of wandering houses.

While the thought of houses rumbling through the streets is a strange one to us, the practice was common everywhere in old Yankeedom.  In his 1783-1819 diary, Rev. William Bentley of Salem gives us 36 years’ worth of evidence.  Usually, a house was moved because the owner didn’t want it, due to its age or size or location, whereas someone else did want it and could have it moved for a lot less money than to have one built.