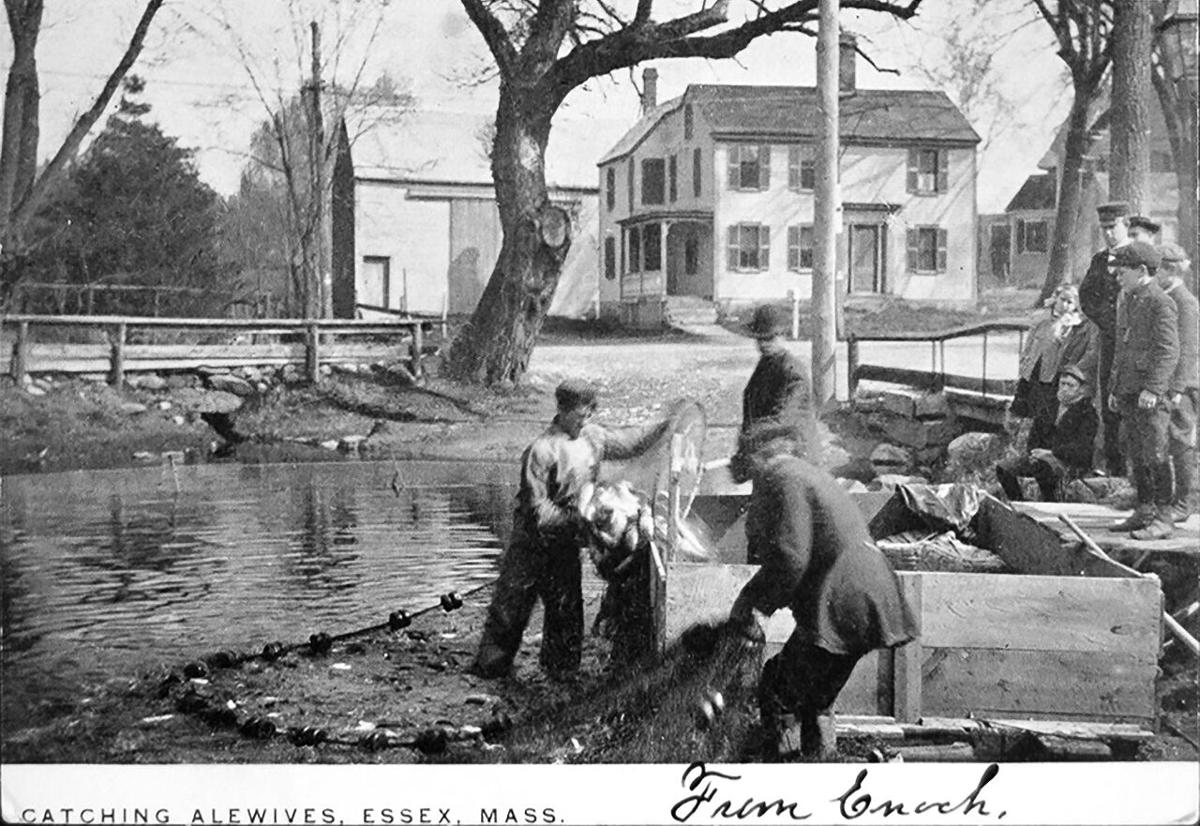 Folks harvesting alewives with seine nets in Alewife Brook circa 1910 near the old Apple Street bridge, which was rebuilt in 1949.  The town of Essex used to auction harvesting rights to people who used or sold the fish for food, fertilizer, fish oil, and bait. 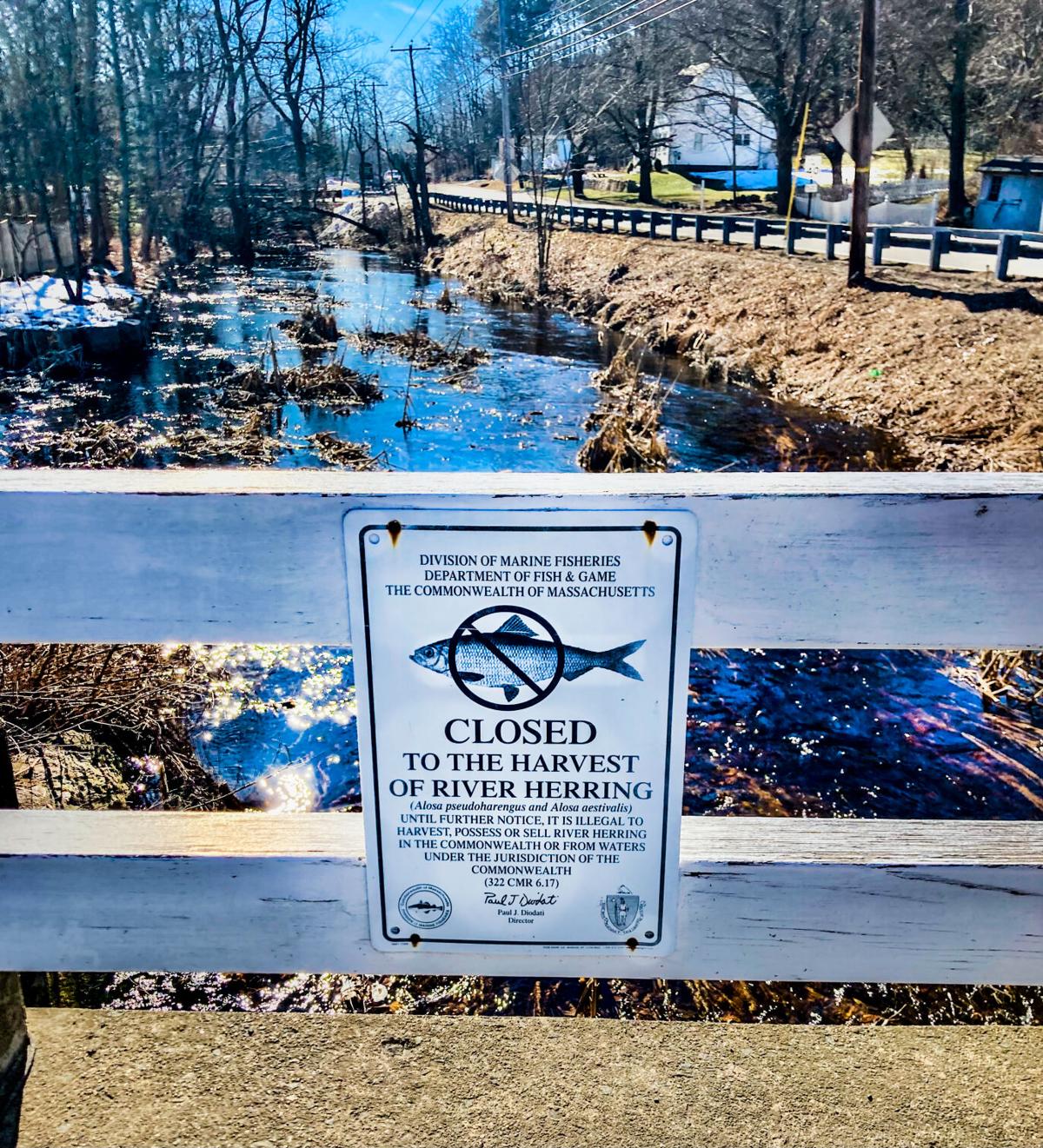 Alewife Brook looking upstream from the bridge on Apple Street at Route 22. 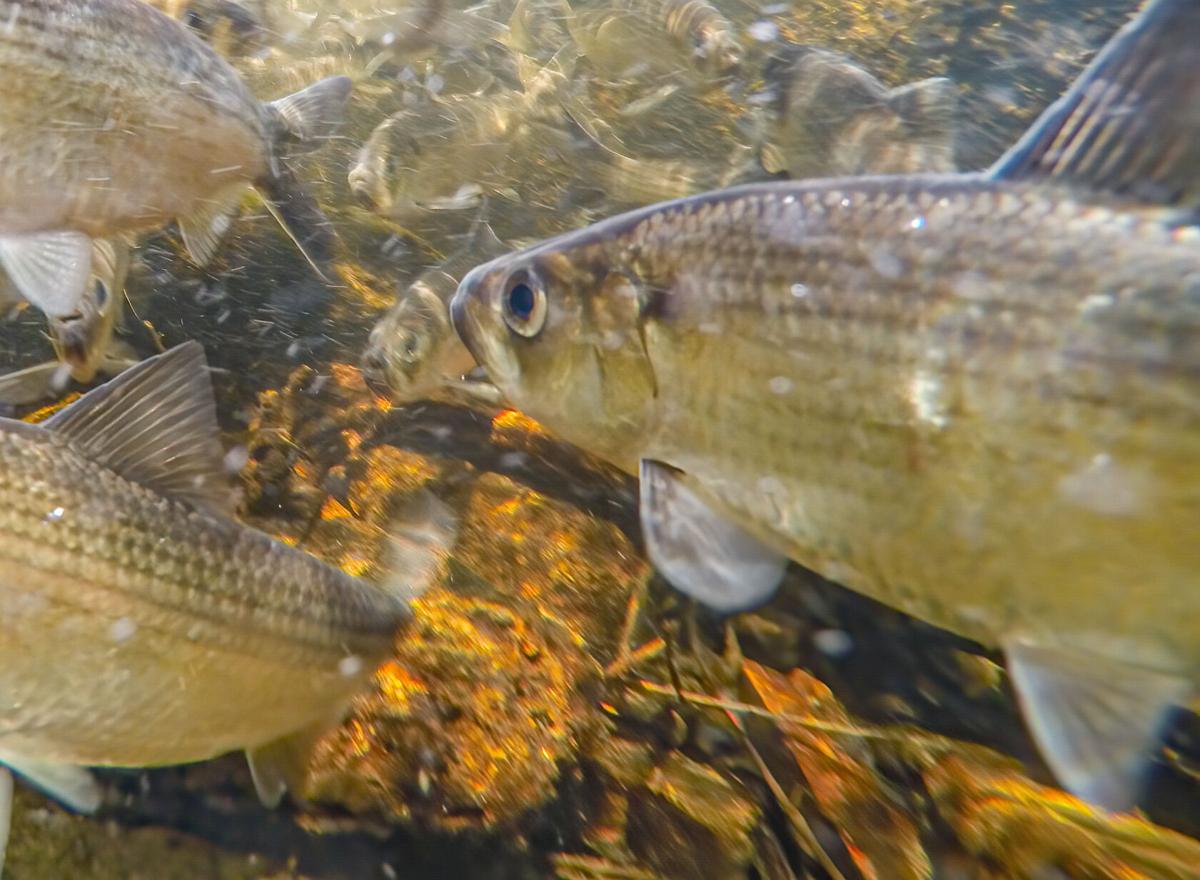 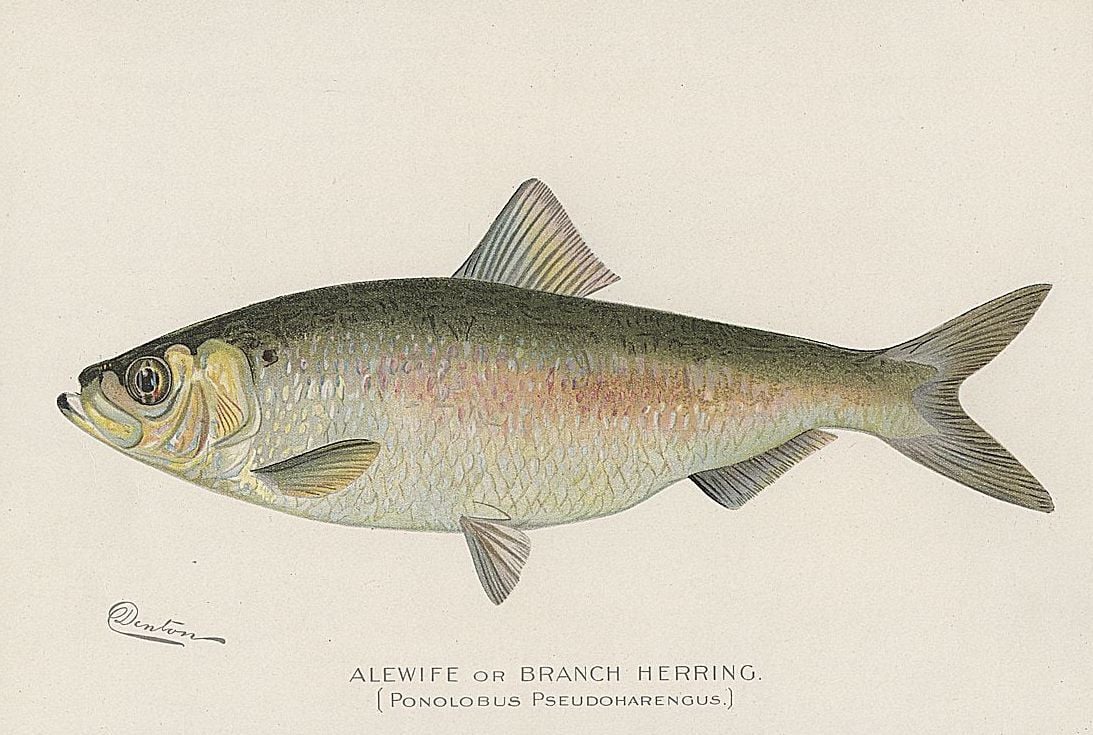 From about April 1st to May 15th, the alewives run up Alewife Brook to spawn in Chebacco Lake.  Most of the fish are just under 12 inches long.  The best place to view the run is from the bridge on Apple Street. 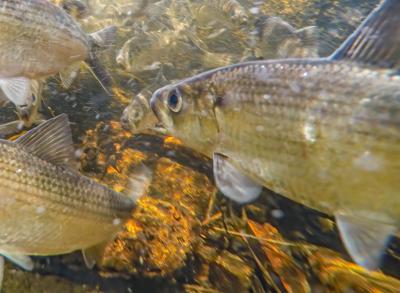 IT'S PART OF A NATURAL CYCLE that’s been recurring for thousands of years.  Every April, the alewives return from the open ocean, enter the Essex River Estuary, and follow their sense of smell up Alewife Brook to Chebacco Lake—the place of their birth—to spawn.

Alewives are one of two species (the other, blueback herring) collectively referred to as river herring.  They are what biologists call an “diadromous” species, meaning that they spend most of their life in the ocean but return to fresh water to spawn.  Salmon are probably the most well-known of the diadromous fishes, but unlike salmon, mature alewives return to the ocean after spawning and repeat the cycle several times during their lifespan.

In Massachusetts, river herring have been harvested since the beginning of human habitation as a food, a bait fish, and a source of oil and fertilizer.  Recall the story of Squanto of the Patuxet tribe teaching the Plymouth Colony how to properly plant maize by burying a fish (most likely a river herring) with each seed.  European colonists and their descendants continued to rely on the bounty of river herring until the fishery collapsed in the late 1960s as a result of overfishing and habitat loss from the damming of rivers.  Nevertheless, remnant river herring populations persist to this day and have even shown limited signs of resurgence in a few rivers in the state.

You may have noticed the sign from the Division of Marine Fisheries (DMF) on the bridge over Alewife Brook on Apple Street explaining that it’s illegal to harvest river herring.  And if you have young children as I once did, you might have even participated in the annual spring ritual of gazing down at the babbling brook from the bridge to spot these small silvery fish making their way upstream.  It sure beat an Easter egg hunt, but that’s just one dad’s opinion.

Once tens, even hundreds of thousands of alewives ran up the brook to spawn in Chebacco Lake, but those numbers have declined sharply.  Dave Lash, executive director of the Chebacco Lake & Watershed Association (CLWA), has lived on the lake for almost 35 years, and he told me, “The first summer we lived here we’d leave the windows open and every single night we’d hear these strange sounds like something slapping the water.”  Ah!  To be serenaded by the slapping sounds of spawning silver fish.  Nevermore.

Spring alewife counts have been a long-standing tradition in Essex.  Historically, the counts were done by local volunteers like Peter Phippen, now Regional Coordinator for the Great Marsh Region of the Massachusetts Bays Estuary Partnership, who’d prepare checklists for other volunteers to monitor the upstream traffic from the bridge on Apple Street.  But these counts were never particularly reliable.  Since 2014, the counting has been managed by the DMF with metal weirs just below Pond Street that direct the fish through four-inch PVC tubing where they are counted electronically.  We know objectively from DMF counts that the number of fish has dropped from 28,000 in 2018, to 9,500 in 2019, to a 4,300 in 2020.

Ben Gahagan is the biologist for the DMF responsible for monitoring the health and population dynamics of six different species of diadromous fish.  Ben told me that there are about 100 rivers in the state with active herring runs, but Alewife Brook in Essex is unique because it’s the only river in the state without dams, locks, or other man-made obstructions.

It’s not well understood, but marine biologists believe the spawning runs are triggered by daylength.  The fish have what’s called a “pineal window” in the top of their heads, which allows sunlight to directly stimulate their brains.  It’s mainly three and four-year-old fish that migrate.  Once they spawn, the adult fish leave the lake, but juveniles hang around for a few more months feeding on zooplankton.  By the fall, all the fish—adults and juveniles alike—head down Alewife Brook to the estuary and the ocean . . . unless their return is blocked.

There are a number of reasons the alewives can get stuck in the lake.  Dave Lash told me “beavers arrived about 15 years ago, so we organized what we called the ‘dawn patrol’ of people that would go down and breach the beaver dam so the alewives could get back down stream.”  Bob Brophy, a 40-year resident of Essex, said that one year, the alewives were so abundant above a beaver dam that “you could just about walk on them!  So, I cut a foot-wide hole in the dam and watched the fish flow out for over an hour.”

A more intractable threat is drought.  According to Ben Gahagan, “Alewife Brook has run dry at least three times in the last eight years.  2016 was a horrifically bad drought year, which meant that juvenile alewives could not get out of the lake.  The following winter, we got reports from ice fishermen of dead alewives under the ice.”  Those droughts are certainly a contributing factor to the lower run counts in the last three years.

Beavers. Drought.  Add to those problems reduced water flow due to choking vegetation and increasing sedimentation.  Sometimes nature needs a helping hand.  Even our forebears one hundred years ago understood that stewardship of the brook was required in order to continue to auction off rights to harvest the fish.  These days, without a clear commercial incentive and a robust alewife run to protect, that sense of stewardship is harder to come by.

Fortunately, we live in a community where conservation stewardship is highly valued.  Dave Lash said that “despite periodic clean-up of the brook over the years by the CLWA, the DMF, and the town of Essex, the flow between the lake and the Essex River continues to decline.”  The good news is that a community coalition is forming with Seaside Sustainability, the CLWA, the DMF, the Town of Essex, the Town of Hamilton, Massachusetts Senator Bruce Tarr, and others to create a sustainable brook maintenance plan.

While these efforts are laudable, it’s important to understand what’s at stake if community efforts fall short and the natural cycle of alewife migration comes to an end.  One only has to observe the spring run in a place where the river herring population is more robust.  “If you go to Upper Mystic Lake Dam in Arlington,” Ben said, “you’ll see stripers below the dam, cormorants and seagulls everywhere, there are blue herons and night herons, bald eagles, osprey.  Historically, river herring were incredibly important to the coastal ecosystem because everything—from racoons and otters to giant bluefin tuna to minke whales—were eating them.”  One of Ben’s colleagues refers to river herring as “the potato chip of the sea.”

How does the ecosystem compensate when such an important link in the food web is compromised or eliminated?  “It’s all about resiliency,” Ben said.  “There are other food sources that these foragers can access, like sand eels or menhaden.”  But with each diminished species we flirt with the collapse of the food web that supports the rich diversity of life we see both on land and in the ocean where these fish spend most of their lives.

In his seminal 1968 paper, ecologist Garrett Hardin coined the term “tragedy of the commons.”  His point was that the more diffuse the responsibility for a particular resource, the greater the risk people will act in their own self-interest and diminish that resource.  That’s one way to describe how the river herring fishery collapsed in the 1960s.  For those working to preserve the future of the Essex alewife run, it’s a challenge to ensure that further “tragedy” doesn’t occur on their watch.

By the fall, all the fish—adults and juveniles alike—head down Alewife Brook to the estuary and the ocean . . . unless their return is blocked.

Return of the Snowy Owls

Back in January, Jim Behnke published an article in The Cricket entitled, “The Snowy Owls of Crane Beach.”  Well, there have been numerous sightings of these spectacular birds throughout coastal Massachusetts in recent weeks.