The Boston Post Cane in Essex is held by the Town Clerk and awarded to the eldest citizen, man or women.  Here, the Essex cane in 2019, held by Pat Harrington, who received it at age 105. 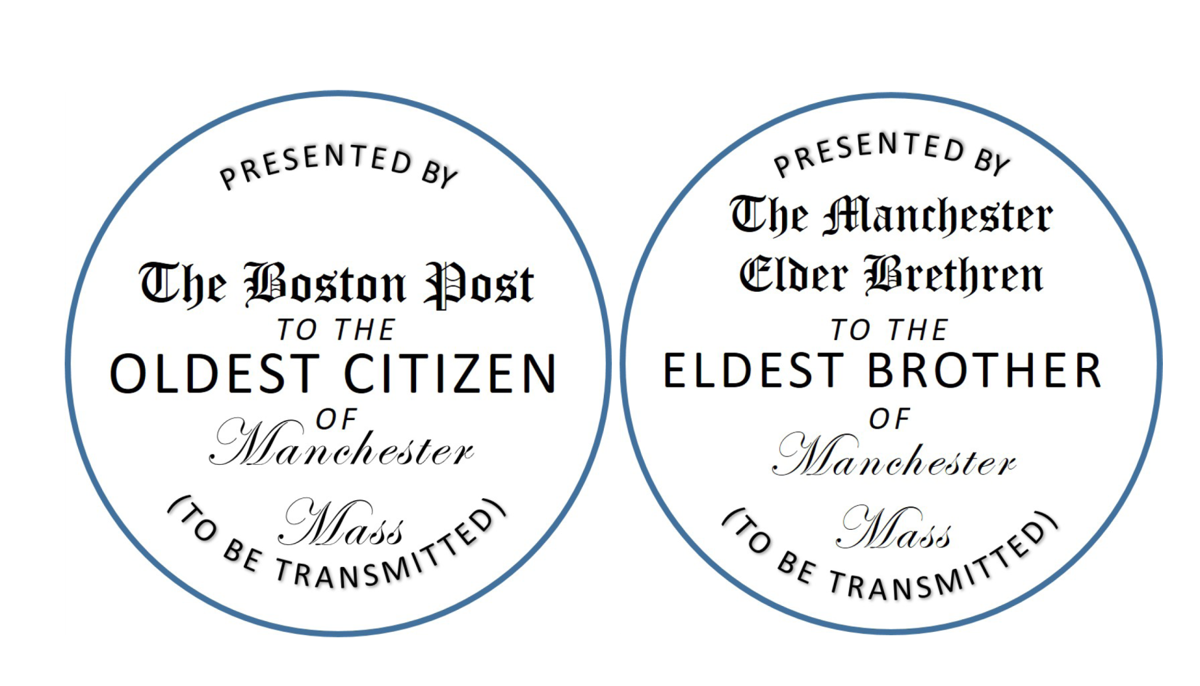 On Monday the Manchester Board of Selectmen approved a proposal to change a 112-year tradition recognizing the town’s eldest male resident to one that includes women.

The recommendation came from the Manchester Elder Brethren, keeper and awarder of the Boston Post Cane, which has been a valued rite of passage for for Manchester’s eldest male resident for years and a feature of the fraternal club’s annual “Old Man’s Party” at Tucks Point.  Last year, the cane was awarded to Gordon MacDougal, who turned 98 in April.  Just before that, it was held by Chris Nahatis.

Monday’s proposal to change the tradition to award the eldest living resident—man or women—came after months of thought and planning from the club’s board.

The Boston Post Cane would now be officially held by the Manchester Historical Museum after September, and awarded by the town to the eldest man or woman starting in 2022.  Consistent with the way canes are awarded in other towns, the BOS may take nominations for any resident interested in being awarded a plaque or certificate as the oldest resident of the Town of Manchester-by-the-Sea.  (Residents may self-nominate.)   A nominee should be a resident of the Town for at least 10 years, the nominee must want the award, and a plaque or certificate will be awarded.  The cane will be presented, but then returned to its home at the museum.

The BOS approved the recommendation, and said the new timing for the award will be most likely in the summer, around the 4th of July town celebration.

So, how did the Elder Brethren come to be the keeper of the cane in the first place?  Well, the club has managed the awarding of the cane since the Boston Post Cane tradition began in 1909, when the publisher of the Boston Post newspaper, Edwin A. Grozier, commissioned the making of 700 fine ebony canes with two-inch, 14-carat gold, ferruled-tipped heads, all decorated by hand.  Grozier sent one to each town throughout New England.  Each was to be presented to the oldest male citizen.  Because the Elder Brethren in Manchester had already been recognizing its oldest member since the 1880s, the club became the natural owner of this new tradition.   Mr. D. L. Bingham was the first to receive a cane, presented by the Elder Brethren in 1909.

In 1930, after considerable controversy, eligibility for the cane was opened to women but many municipalities continued as a male-only affair.

Today, there are approximately 460 canes in circulation, many having been lost or forgotten, most often when recipients are given the cane to keep, they are lost, stolen, destroyed, or buried with the current holder.

In the meantime, the Elder Brethren have been offered a donation of another ornate and beautiful historical cane from the Hood family to continue its own tradition.  (The Hood family has an extensive vintage cane collection at Dartmouth College in Hanover, New Hampshire.)  So, starting next year, the group will honor one of its own as the eldest living male in Manchester.  Two similar certificates have been designed to mirror each other, the Elder Brethren award and the Boston Post Cane award, as a way to commemorate the club’s interwoven connection to the tradition in town.

What this means is that conceiveably, one person can simultaneously hold both the Elder Brethren Cane and the Boston Post Cane honor.  If he is a man, that is.  But given that longtime resident Dee Burroughs turned 100 years old last year (right after she successfully voted in the 2020 US Presidential Election), 2022 might be the first year the Boston Post Cane is awarded to a Manchester woman.

Gordon MacDougal, current holder of the actual golden cane, will be able to continue his reign, and possession of the gold-furled cane, until the award is given in September at the next Old Man’s Chowder Party.   A fine compromise all around.

Here he is, Gordon MacDougall, who at 96 is Manchester by the Sea’s eldest living resident on July 25th at the Golden Ager’s annual Summer Hummer lobster bake at Tuck’s Point last Thursday.