The Scott Energy team, at the company’s home in Gloucester, today. 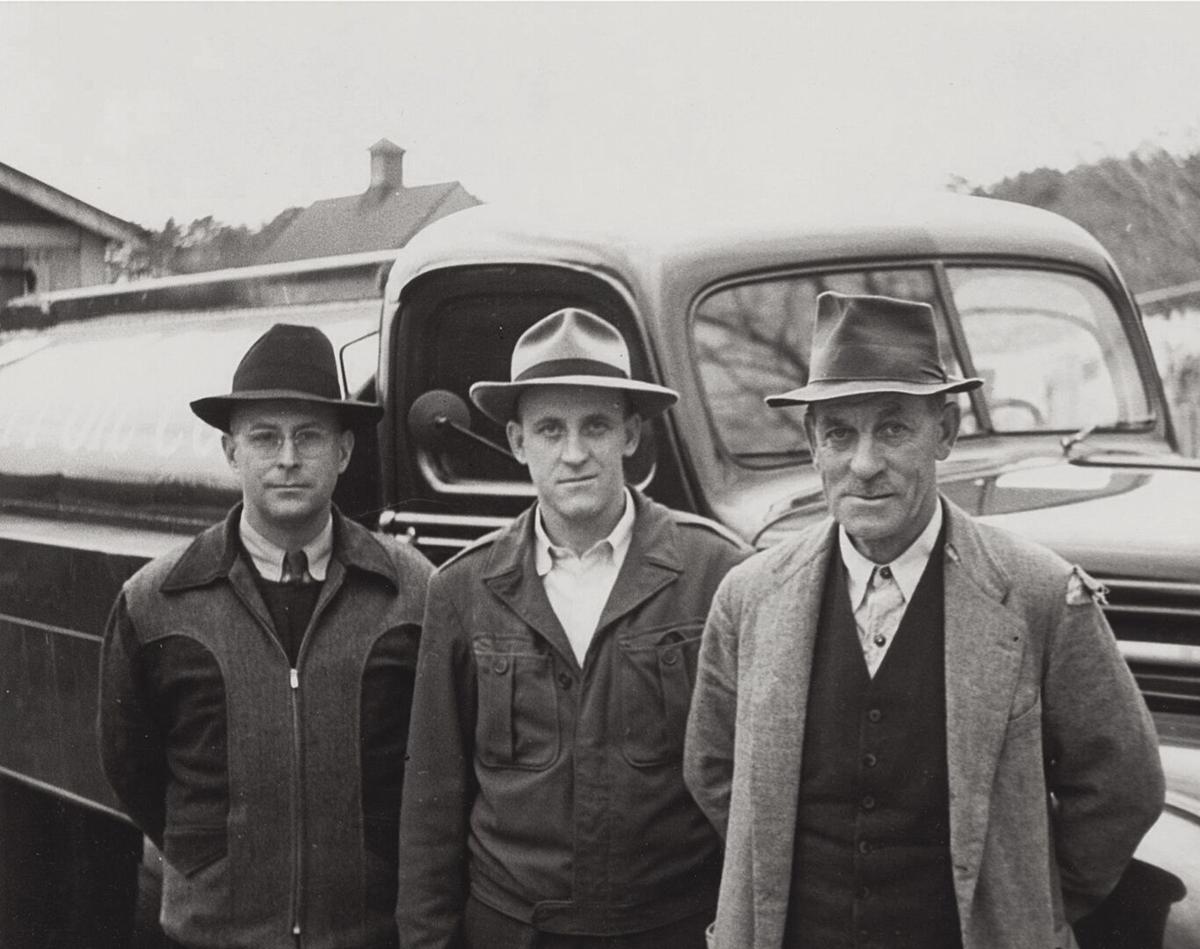 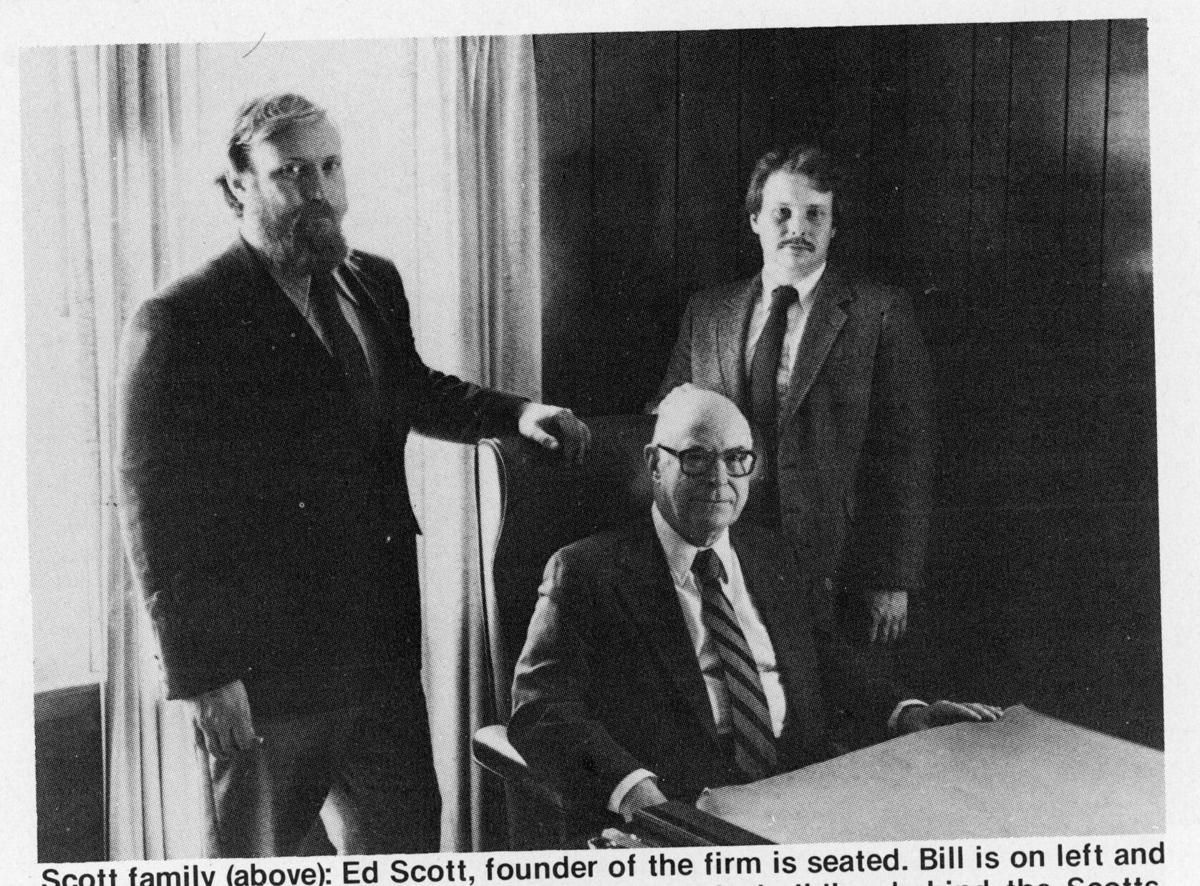 Edward P. Scott, Sr., seated, with sons Bill (standing,left) and Ed (right) featured in a national trade magazine story in 1981 about their company.

It’s not often that a local company celebrates 75 years in business.  For Scott Energy, a familiar and valued heating and cooling company, it’s a milestone that marks success with family and growth in an industry that has been full of change.

Bill and Ed Scott say their father, Edward P. Scott, Sr., may not have known in 1946 quite what the future held when he purchased West Pond Ice & Oil a one-truck oil company in Magnolia and started “Scott Oil Co.” shortly after the end of World War II.  During Ed Scott Sr.’s first year in business, he delivered 50,000 gallons, and performed service out of the trunk of his car.  In 75 years, it has blossomed into a regional, third-generation, family-owned business with 35 employees serving more than 5,000 customers and expanded into new, eco-friendly fuel products.

But one thing their father would recognize is the company’s secret to success—solid focus on customer service.

Bill and Ed started in the business by being around from a young age riding around with their father as he delivered fuel or repaired burners in homes and small businesses.  According to stories the senior Mr. Scott told his sons, the original truck he purchased was the target of many jokes back in 1946.  When he’d drive to fill it up in Danversport, the other delivery men would tell Ed senior that it would never make it back to Manchester because it was in such bad shape.

Soon, however, Scott’s business grew, and all his trucks looked like they came out of a professional wash. He always wanted his trucks to be clean because he felt they were rolling billboards.

Bill and Ed began working summers during high school years in Manchester and then went into the business full time after college.  Bill and Ed were jacks of all trade.  Their days began at 7:30 a.m., and many nights they were out on service calls.  They’d drive the delivery trucks, take care of service calls and installations, and handle paperwork for new installations or service work.  They’d look over proposals, meet with customers, order parts or equipment and dispatch drivers and servicemen.

Over the years, Scott Energy grew organically, and by purchasing four local companies.  Ed said the growth has been purposeful, and always favored adding customers in existing service communities rather than pushing out to a new footprint.  He said by keeping a tight, regional North Shore market (from Lynn to Newburyport and over to Gloucester, where the company is headquartered) has served them well.  That policy comes from hard-won, first-hand experience.

“We want to quickly service a customer with no heat in January,” he said.  “That way we know the customer will be happy and we’ll be successful.”

The company has also been early to move with industry technologies.  With increasing focus on climate change and concerns about all fossil fuels, the company began experimenting early with alternatives and innovations.  In the early 1980s, the company introduced solar energy solutions.  The company officially changed its name to Scott Energy, Co., dropping “oil” to reflect expanded idea of heating, cooling and air systems. They even diversified into propane to be a well rounded Energy company.

In fact, Scott Energy was early to sign on to a net zero carbon emissions industry commitment in Massachusetts by 2050, to slow global warming impact and improve air quality.  The company is transitioning to blended renewable liquid “BioHeat” developed by scientists that utilizes renewable and recycled materials like soybean oil and used cooking oils, in conjunction with ultra-low-sulfur heating oil.  The eco-friendly fuel produces fewer emissions than traditional home heating oil, and keeps equipment running smoothly.  And because it requires no modifications to home heating systems, it’s economical and the impact on environmental change can happen now.

“This fuel is a major part of our plan at Scott Energy to combat the effects of climate change today, rather than in 10 or even 20 years from now,” said Bill Scott.

As a result, Scott Energy uses Bioheat Plus which is 20 percent renewable biodiesel.  In eight years, it will be delivering a product with 50 percent recycled biodiesel.  And so on, until 2050 when the company and the heating fuel industry will come through on its net zero promise.

All these years later, Scott Energy has remained in the hands of the Scott family.  Although there have been a few changes in the three-quarters of a century since its initial founding (like the company’s name) Bill and Ed Jr., Ed Sr.’s sons, have kept the priorities and driving mission of the company exactly the same.

“We are all proud of how far Scott Energy has come over the past 75 years,” said Bill Scott.  “A lot has changed, but the focus here is the same: unmatched service. We are as committed now, as ever before, to developing strong and lasting relationships, earning and maintaining trust and going the extra mile for our customers.”

It is also an active member of the communities it serves and regularly supports a myriad of charitable organizations, nonprofits and community groups.  Continuing on the tradition of what they call, “family-quality service,” Bill’s sons, Adam and Taylor, have assumed managerial positions within the company and are its future leaders.  They are the next generation, and they’re focused on the next 75 years.

The Cape Ann Regional Grant Project will hold the first in a series of free workshops tailored to meet the needs of Cape Ann’s small businesses.  All Cape Ann business owners and their staff are eligible to participate.