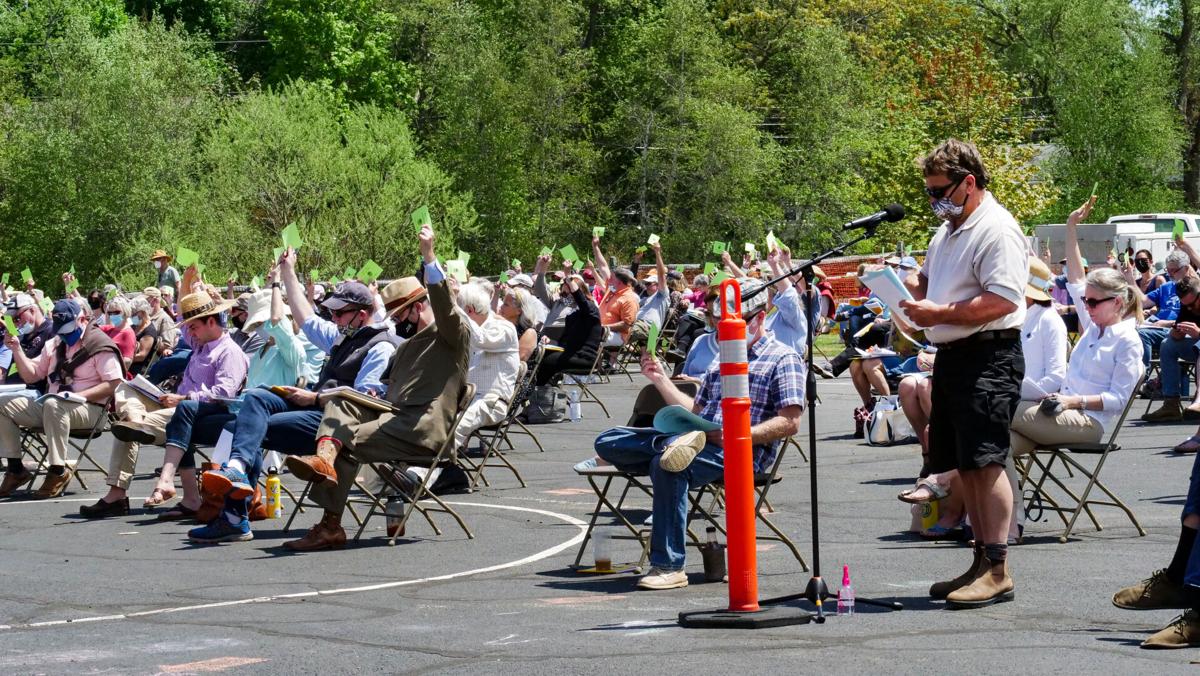 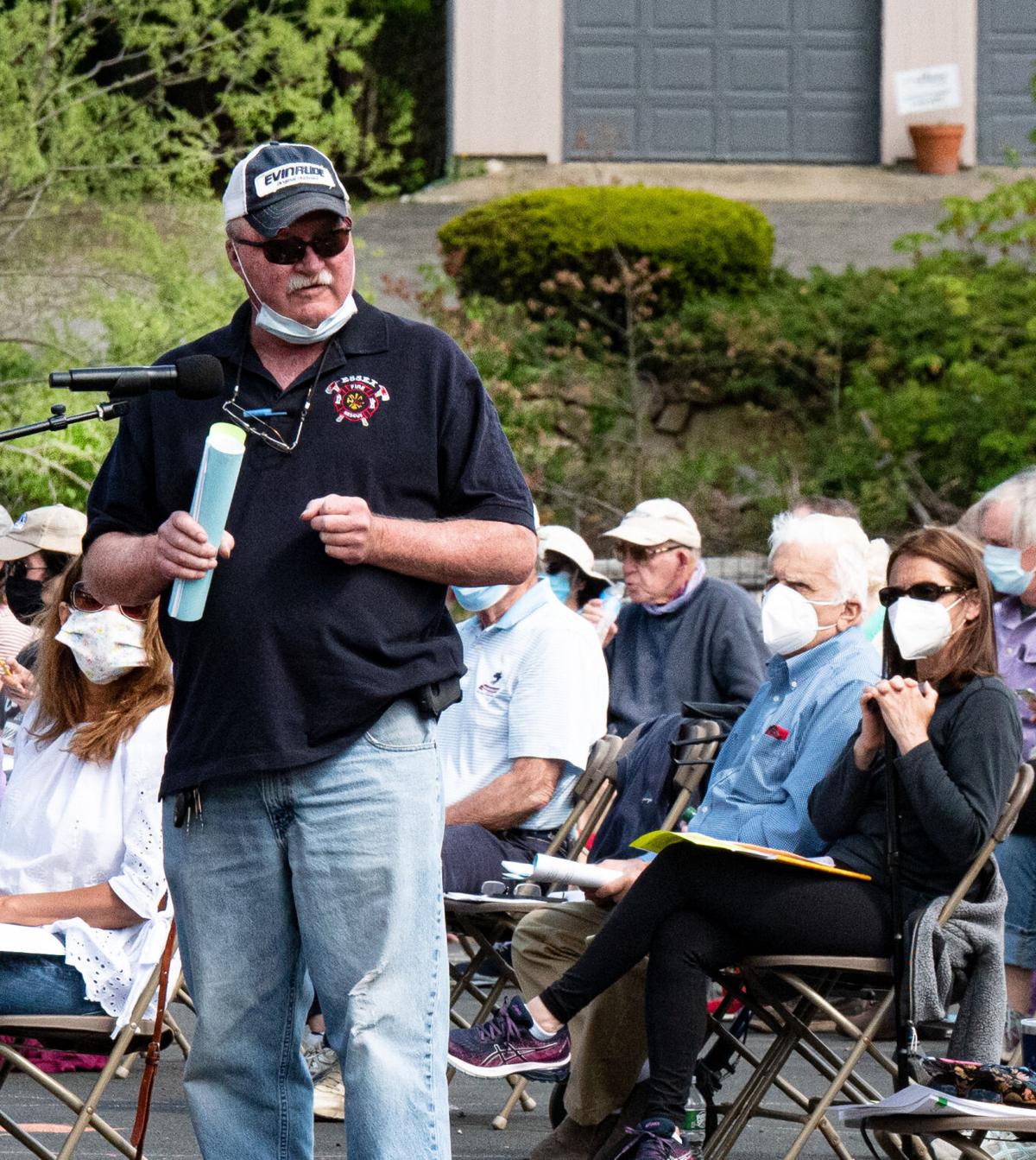 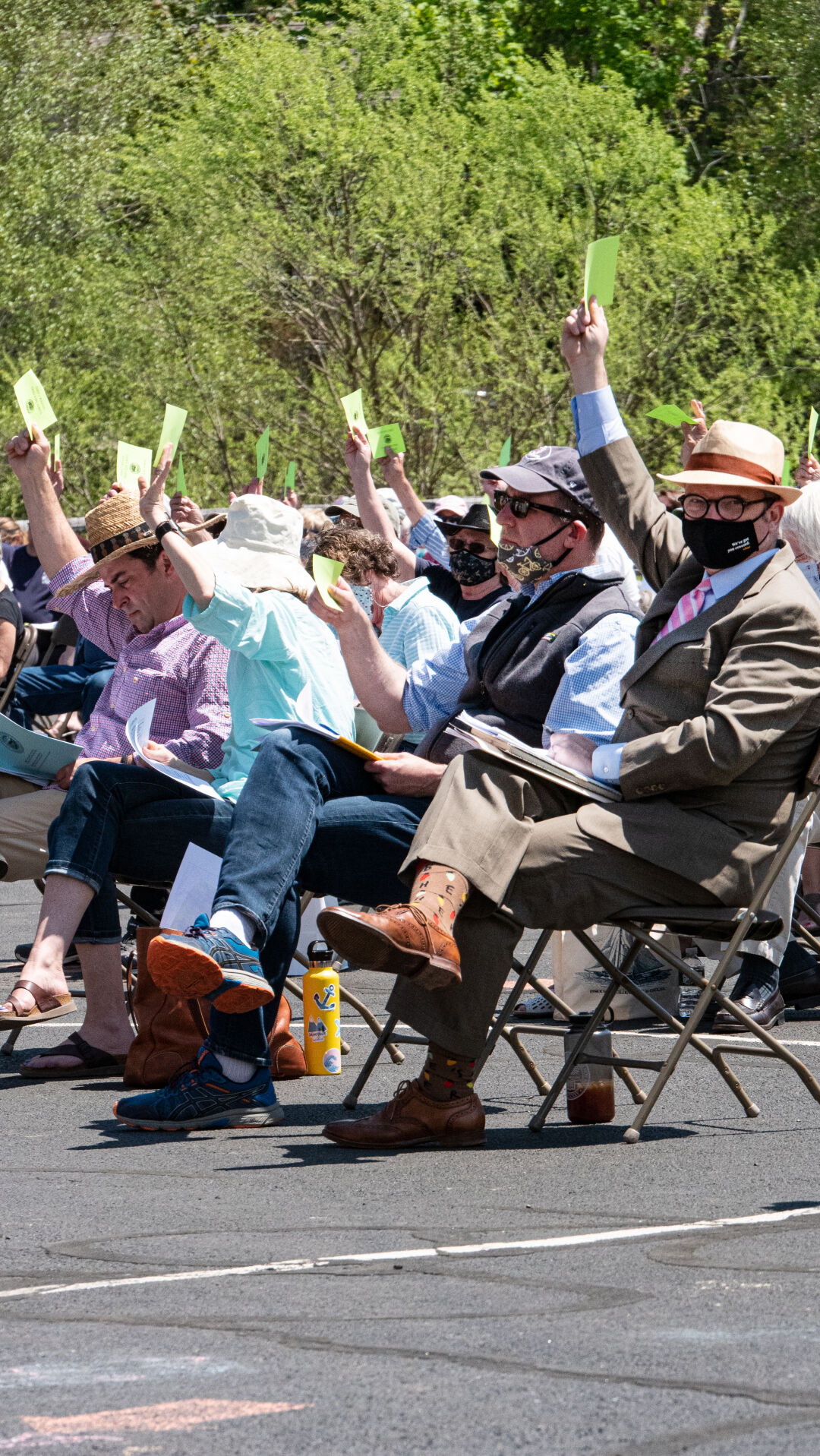 A packed outdoor Essex Annual Town Meeting Saturday passed a packed agenda of votes, bringing in historic changes to zoning and narrowly denying a citizen’s initiative to regulate the construction of wireless cell towers in town.  In all, 286 checked in and stayed four hours to plow through the 25-article Town Warrant.

A packed outdoor Essex Annual Town Meeting Saturday passed a packed agenda of votes, bringing in historic changes to zoning and narrowly denying a citizen’s initiative to regulate the construction of wireless cell towers in town.  In all, 286 checked in and stayed four hours to plow through the 25-article Town Warrant.

The meeting’s quorum requirement was just 30 residents, but a whopping 286 checked in and stayed at the Essex Elementary School to plow through the 25-article Town Warrant.

In the end, it took four hours to get through the articles.  Some towns, like Manchester, are choosing conservative ATM voting agendas this year because of COVID-related safety restrictions, whittling their warrants of controversial issues to a later, fall debate and vote.  Not Essex.  Six years in the making, the Planning Board’s “Essex Downtown District,” would be the town’s first ever use-based district.  The Planning Board’s second article sought a town wide, two-year moratorium on all residential-to-commercial conversions, giving the town time and space to shape its big picture zoning according to economic development and housing goals.

Both required a two-thirds majority at Town Meeting to pass.  And voters easily passed both, after discussion, with important changes.

Without a doubt, Article 13 was one a big article, with big implications.  The Essex Downtown Zoning District was presented by Planning Board’s Wesley Burnham (chairman) and Lisa O’Donnell, who said Essex was one of just five Massachusetts municipalities among 351 that remained a single-zone town.  The other four, she said?  They are all in rural areas of Western Mass.  It’s time, she said.

The new district would allow as a matter of right “mixed use” business buildings, with resident units on the second floor.  Other permitted principal uses in the district include motels or hotels (by special permit), some industrial uses, parks and recreation, and storage.  These uses feature reduced requirements for lot sizes and frontage, depending on their use.  Permitted accessory structures are allowed, with limitations.  So called “Industrial A” businesses, which include 24-hour manufacturing, are prohibited.

Burnham said was an important moment for Essex.  The town’s first zoning bylaw was created in the 1950s and only in 1974 did it undergo a significant update.  Today, 90 percent of the town’s taxable properties are residential, and businesses (industrial, professional, or retail) can be sited anywhere with a simple “change of use” application.

Use-base districting gives the town the ability to shape and control its future, said Burnham.  A formalized downtown district is the first step to shaping the economic tax base, he said.  It also encourages density of dwellings, with smaller apartments or accessory units geared to older residents who want to downsize, or young people just starting out.

Few residents debated the merits of a downtown zoning district.  But there was strong opposition to the district’s parameters, specifically from residents of Pickering, Maple and Winthrop Streets who said their mostly residential neighborhood should not be part of a commercial-friendly district.  They want their neighborhood, characterized by historic homes and narrow streets, to stay residential.

Resident Ed Neale made the motion to remove those streets from the Downtown District, his motion was seconded and with a little debate, it passed easily.  Once Neale’s amendment passed, so did Article 13, handily securing two thirds of the vote.  No hand-count needed.

Next up was Article 14, a cousin to the downtown district article, that would impose a town wide, two-year moratorium on residential-to-commercial zoning changes.  That also passed, nearly without comment.  In fact, the only comments coming from this article were calls for caution to move with comprehensive planning quickly, and not let time pass without action.

Then came, Article 15, the 18-page comprehensive bylaw to regulate the development of wireless or cell phone towers.  The article was a citizen’s initiative petitioned by a neighborhood group fighting an application currently before the ZBA to build a cell tower off Eastern Avenue.  Shelly Bradbury, fresh off her narrow, 20-vote election win to the Planning Board last week, presented the article as the leader of the “Save Essex's Landscape” neighborhood group behind the article.

The group hired a municipal land use attorney, Peter Mello, to draft the bylaw to mirror one recently implemented in Templeton, Mass. that was seeking similar protections against wireless companies building towers in largely residential communities.

Support for the proposed bylaw was strong, and vocal.  Mothers said they were worried about the health impact of abutting an operating cell tower.  Others said Essex is pristine and beautiful, and a tech tower in the wrong place is a blight.  Having a cell tower in town is fine, they said.  Just not off Eastern Avenue.  There’s a better way to meet the community’s needs for connectivity, they said.  Safety was cited.  The integrity of the town’s watershed was invoked.

In the end, though, it seemed to be a lack of planning that held back necessary voter support for the article.  The BOS did not support the bylaw, nor did the Planning Board.  Chairman Wes Burnham said it wasn’t ready for prime time.  He said he had pages of suggested changes to make the bylaw work realistically in Essex.

Resident (and attorney) Jody Davis got up and commented that he “couldn’t remember the last time an article passed at Town Meeting that wasn’t supported by a single town board.”  Further, he said, Essex has a history of wisely avoiding moves that would invite the expense of legal action.  The proposed citizen’s bylaw, he said, would surely invite a lawsuit.

In the end, the first vote was too close for Town Moderator Jeff Jones to call.  He requested a hand count: 134 yes, 80 no, which fell just seven votes short of the required 141 to pass.

Then came a series of procedural moves to save the initiative.  Bradbury proposed a secret ballot.  That vote failed.  She asked for a recount.  Jones denied the request.

Finally, at the end of the town meeting, when many attendees had left, Bradbury asked for a vote to reconsider the article.  Jones put the question up to the group that remained.  The voters demurred.

Local elections are here, and in Essex two residents—Shelly Bradbury and Bill French—are running for one seat on the Planning Board in the town’s only contested race.  Each has written an introduction for voters in Essex.