You are the owner of this article.
Edit Article Add New Article
Home
SUBSCRIBE
News
COVID-19
Out and About
Homes
Expert Help
Sports
Long Ago
Obituaries
Opinion
Share This
1 of 2 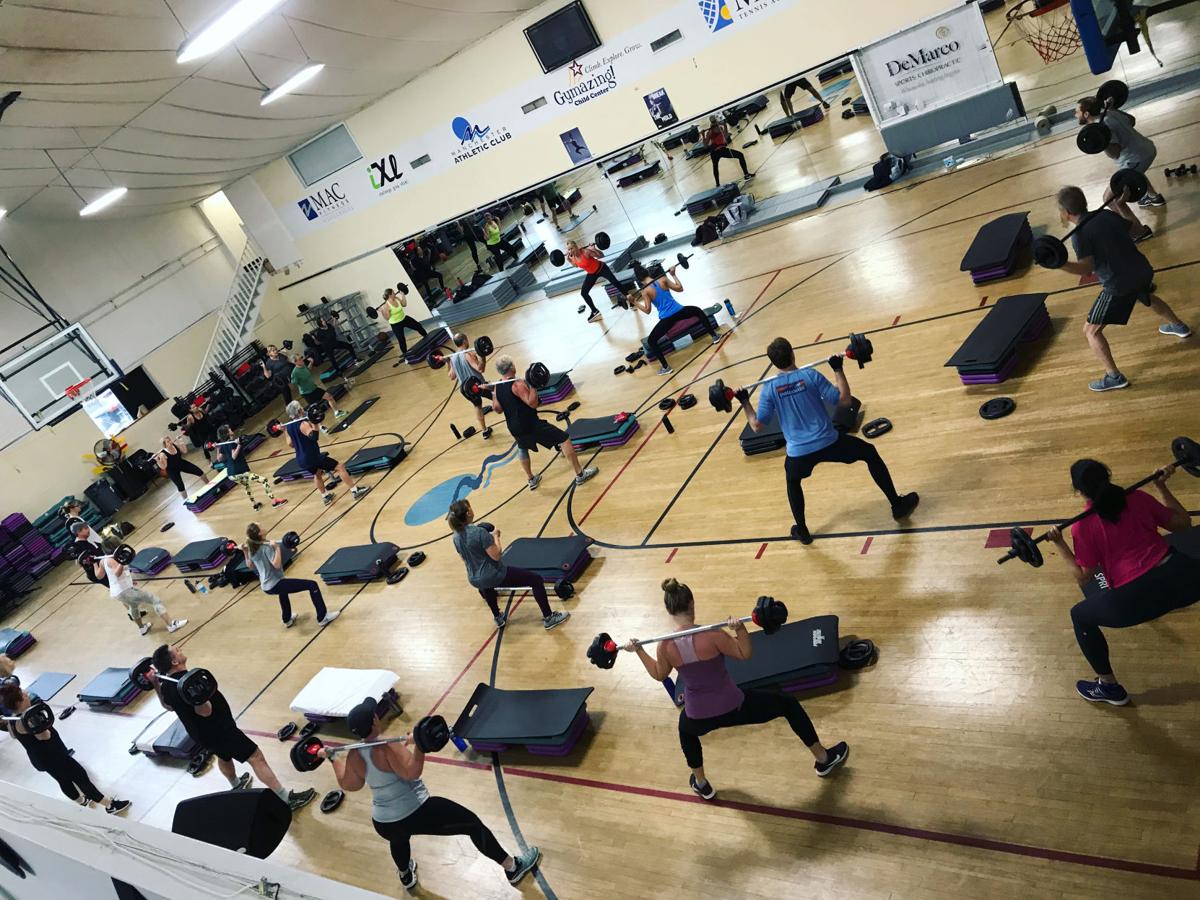 When the MAC closed in late March, the team was worried it would lose momentum of its most popular group fitness classes, like Body Pump, which regularly maxed out at 40-45 people.  During the COVID quarantine, Zoom Body Pump hit as many as 70 participants. 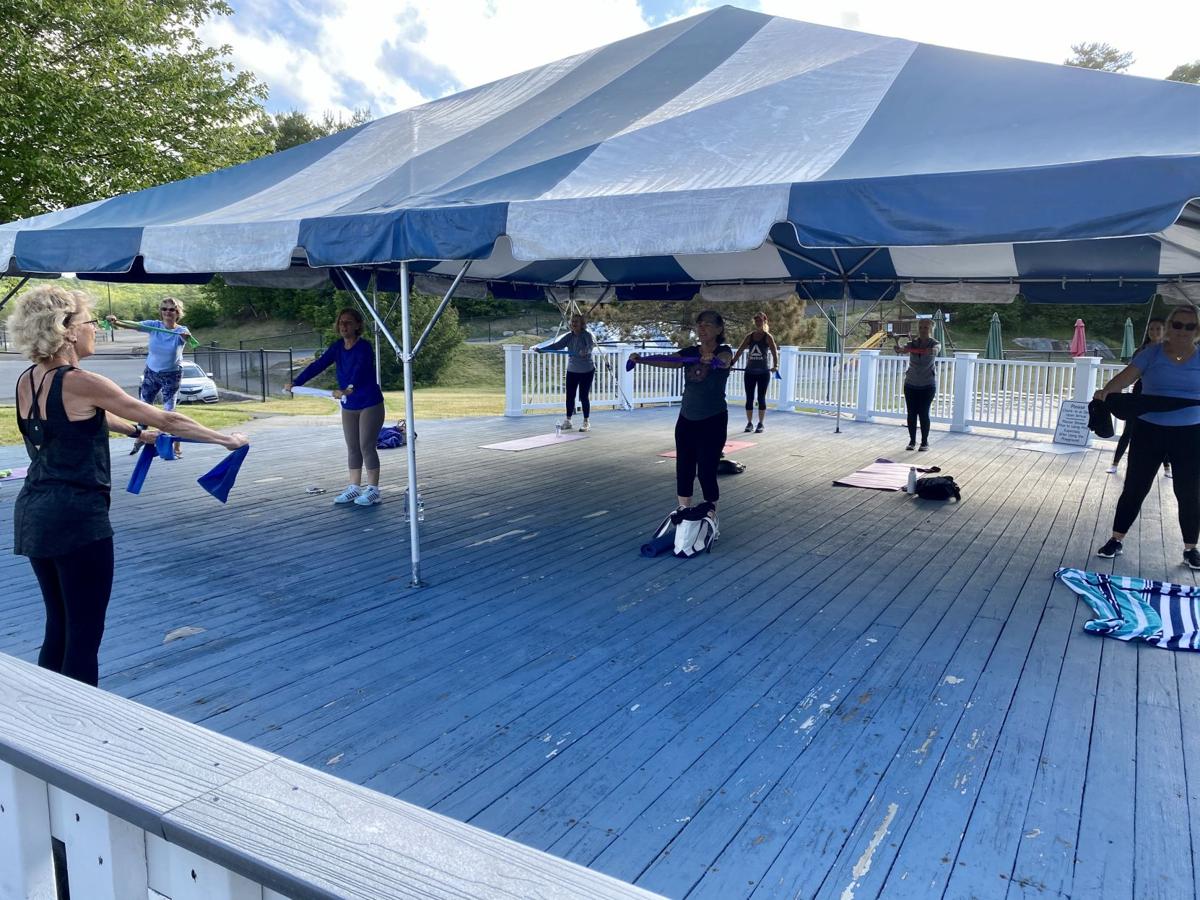 Last week the MAC held its first outdoor group class, Yoga Fit, under a large tent by the pool and outdoor café. 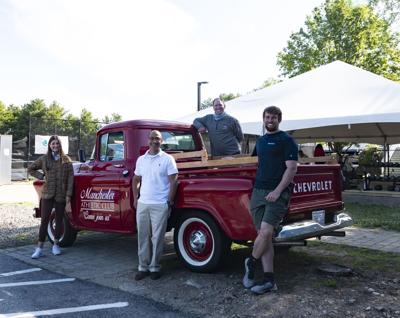 THREE MONTHS AGO, the idea of broadcasting a live online group fitness class wasn’t on the Manchester Athletic Club’s radar.  That was a long time ago, before COVID changed daily life and before Massachusetts temporarily closed all non-essential businesses, including health clubs.

But by last week, the MAC was averaging 20 virtual fitness classes a week, and when the state began phasing business back in, Cape Ann’s largest health club and tennis center began a soft opening with a whole new experience for members.  Outdoor group classes are going on under one of three new massive open-air tents, one-on-one personal training and tennis programs are busy.  It’s all part of a rolling series of reimagined “indoor-outdoor-online” services and big facility renovations the MAC management team began once COVID hit, knowing that things would be different for personal health, fitness, athletic training, competitive tennis, and the group activities that are traditional drivers for the club.  And they wouldn’t be changing anytime soon.

“Things are totally different now, and we knew quickly this would be the ‘new normal’ for us,” said Brendan Hurley, director of fitness at the MAC.  “We’ve adopted full safety protocols to put members in the safest and cleanest environment possible.  We’ve utilized our outdoor spaces in creative ways.  All trainers are currently wearing masks with clients and they have their own personal sanitizing equipment.  Inside the club, we are re-organizing the set up for work out areas and our machines so when we open the building it will be a perfect complement for members.”

The MAC is one of the oldest fitness centers on Cape Ann, founded in 1973, and it’s certainly the biggest, combining 90,000 square feet of indoor space with seven indoor courts, five outdoor courts, three paddle tennis court, an indoor pool as well as an outdoor café and pool.  And that’s just its Manchester site.  There are also two satellite facilities in Gloucester and Rowley.  Owner Anthony Simboli purchased the club from John Donovan in 2015 after a busy and successful career in Boston real estate development.  Simboli said he was ready for a move, and the idea of operating a business servicing a large community of members was creative and challenging in a different way.

When he took over, the MAC already had a real strike zone in tennis, having established a partnership with Nick Bolletteri, the legendary tennis coach who worked with ten Number One ranked players including phenoms like Andre Agassi and Maria Sharapova.  Simboli has dramatically expanded the program, building out the facilities run by Tennis Director Dave Colby.  Last year, the MAC hosted 45 national junior tournaments and was selected as one of just four facilities in the US to host national Level-1 tournaments for girls 12-years-old and under.  At the same time, Simboli invested in traditional fitness with MAC COO Andrew Hankinson, Fitness Director Brendon Hurley and Group Fitness Director Lindsay Mzaouakk.  They widened group fitness classes from 80 classes per week to 120, and introduced specialty performance programs, adding sports psychology while expanding physical therapy and body work to members.  All this while Simboli expanded aquatics programming at its Olympic size indoor pool center and built out support programs like the Gymazing childcare center and seasonal camps.

This wave of improvements did two things, Simboli said.  First, it forged a core team that leaned on one another.  But it also created a style of operating on a “test anything” model.  It wasn’t unusual for the club to try a new idea, gauge how it was greeted by members, and either keep it, tweak it or discard it if it wasn’t adding to the overall value and experience.  In fact, one of the club’s most popular programs today is a three-month bootcamp-style class blending exercise regimen with nutrition called “Fit90,” started by trainer Tara Faria as a test.

What the team didn’t realize was how well that model would serve them once quarantine hit.

When all non-essential businesses were temporarily closed on March 28, many businesses buttoned down to wait out the storm.  Not the MAC.  “We figured we’d take a look at the challenge and make the best of it,” said Hurley.

First, they reached out to members, telling them they wouldn’t be charged monthly fees until the club reopened.  Katelyn Baginski, the club’s director of marketing, took the lead on communicating with members, and setting up an online broadcasting platform for classes and webinars like one hosted in May for members with a microbiologist who held a Q&A on coronavirus.  They accelerated initiatives already in the pipeline, like a $250,000 stem-to-stern renovation of the indoor pool originally planned for next year.

In the end, they learned that adapting to the “new normal” has brought fresh ideas.

With the facilities closed, they tested a couple group fitness classes by Zoom.  Those classes filled up, so the they introduced more.  Now, online classes have their own momentum, with MAC teachers hosting 18 to 28 virtual Zoom classes a week ranging from Yoga Pilates, Zumba Barre, Strength, Core, Stretch, and Fit At Any Age.  These classes take place live and are then archived online for on-demand viewing.  According to Vimeo, the MAC fitness class videos have been viewed more than 14,000 times.  And all this has been free for members.

“To put it in perspective, our most popular class before COVID was Body Pump, which routinely packed the entire indoor basketball court with 45 people,” said Simboli.  “In a virtual class last week, there were almost 70 participants online.

Long before the two new tents went up in June, the MAC had already cut its teeth on “al fresco” fitness, when Hurley had the idea to set up a dedicated outdoor athletic training program for high school athletes.  It worked, big time.  So in March when COVID first his, Simboli said, the idea of a tent was “automatic.”  He contacted Taylor Hedges at the Event Company, a local wedding and special event rental facility, and reserved two tents.  The first opened June 15 just off the outdoor tennis courts, for private by appointment training.  Then another was set up for group fitness classes off the outdoor café and pool and a third, 40-by-100-ft. tent for the area covering the turf field..

Over the next several weeks, members will return to the Manchester Athletic Club they know well, but they will enter an environment that feels entirely new, with safety, sanitary, and social distancing protocols in place that will assure them.

But in the end, said Hurley, the biggest changes may just be permanent, and that’s a good thing.  Over time, the club may find some members prefer keeping to the traditional in-facility fitness or swimming experience.  Or they are performance oriented and want training from a specialist or clinic every single week.  Or they may find the online Body Sculpt class they like is better right from their living room.

“After our first outdoor class, Yoga Pilates, one of our members said she had to get home quickly because she didn’t want to miss Body Sculpt online,” laughed Simboli.

What a difference three months make.

Our most popular class before COVID was Body Pump, which routinely packed the entire indoor basketball court with 45 people.  Two weeks ago, that same class online had almost 70 participants.

For years, some Manchester downtown businesses like Manchester By The Book and the Stock Exchange have used the areas just outside their doors to display goods to entice people inside. Essex, with its antique shops, has practically made an art of it.  But in this “COVIDian” time of shutting down, other businesses including restaurants and retailers who don’t have a lot of “entry” sidewalk space have sought to expand their storefronts into the outdoor sidewalks to ensure safety and they need help and support from their towns to make it happen.